What is financial provision?

Mining is one of the most destructive activities for the environment and for those who depend on the environment. For this reason, there are laws designed to ensure that the mining companies that cause the damage are the ones who pay to clean up the damage. The main law in South Africa is the National Environmental Management Act (NEMA), and the Financial Provision Regulations published in terms of NEMA.

Financial provision is a form of security: before they start mining, mining companies must assess what it will cost to rehabilitate the impact of their operations on the environment, and then they must set aside and secure the amount of money needed to cover that cost until the money is needed for rehabilitation. In other words, the one who pollutes is the one who must pay to clean up that pollution.

There haven’t always been laws to make mining companies clean up after themselves – these laws are relatively recent compared to the long history of mining in our country. Gradually the laws dealing with environmental rehabilitation of mining impacts have been improving. However, compliance with those laws by mining companies is poor and the implementation of those laws by the Department of Mineral Resources and Energy (DMRE) is also poor. This is one of the reasons why it is important that those who are affected by mining, or who will be affected by mining, play an active role in the licensing processes for mines and as civil society watchdogs on ensuring compliance with environmental licences and laws by mining companies.

To make sure that financial provision is accurately assessed and allocated for environmental rehabilitation – and to ensure this money is kept safely until it is needed – it is very important that affected communities get a say in these processes right from the start.

The 2021 Draft Financial Provision Regulations introduce various noteworthy changes and with those changes some concerns arise. We discuss some of those concerns in this article. You can also read our detailed comments on the draft regulations. 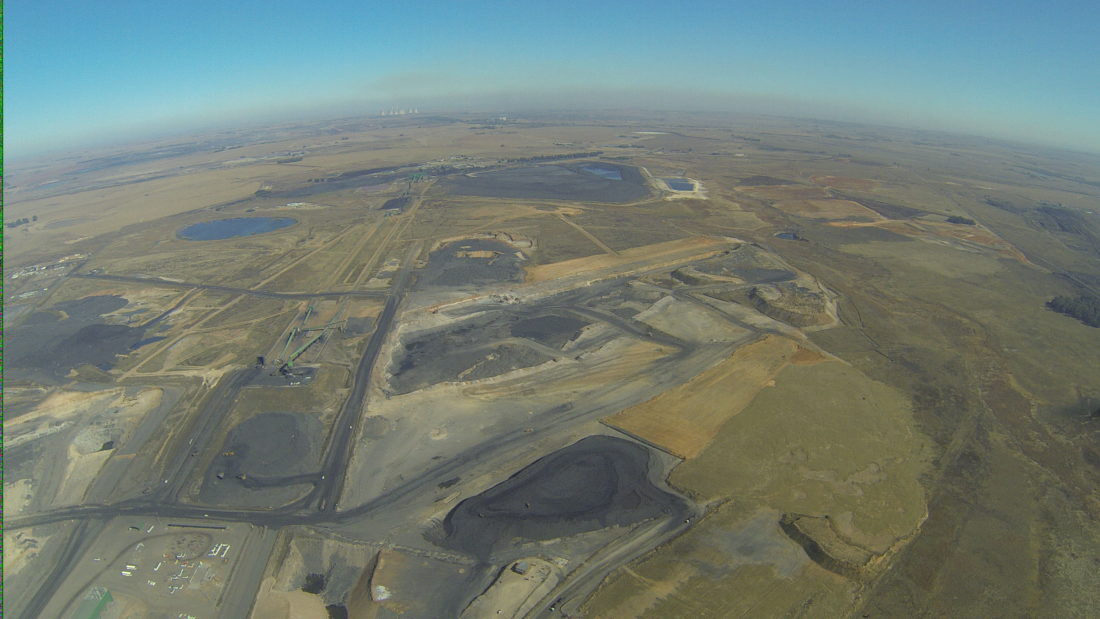 Energy production through opencast coal mining and coal-fired power stations has transformed the landscape on the Mpumalanga Highveld, and filled the atmosphere with smog. Each power station emits a toxic combination of SO2, NOx, particulate matter, and other pollutants. Image credit: Melissa Fourie/CER

What does a “Sustainable End State” mean?

Mining-affected communities often bear social, environmental and economic hardship during mining operations, and continue to do so after mining has ceased.

For this reason, the CER and our partners argued in our comments on the 2021 draft regulations on financial provision that those regulations must recognise the importance of a sustainable end state that includes land uses. The draft regulations propose that “sustainable end state” should mean “the site specific situation for land, water and air at the time of reaching the risk threshold”. We said that this should be conceptualised, consulted on and approved at the design stage, before any mining commences.

It is very important to develop and define how the land will be used after mining ceases. This must include economic diversification planning to be done at the pre-feasibility stage because of how common it is that no economic activity is sustainable on mined land.

The impact this has on aggravating poverty and inequality flies in the face of the objects of the Mineral and Petroleum Resources Development Act (MPRDA), which include addressing historical social and economic inequality. Ensuring a sustainable end use should therefore be recognised as essential at the pre-feasibility and licensing stage.

Inequality in our country is sharply aggravated by the resettlement of communities to make way for mining. This practice perpetuates centuries of dispossession through slavery, colonialism and apartheid. Access to land and land reform in the first instance by and for those most affected by mining must be a central objective in conceptualising a sustainable end state.

We argue that a sustainable end state and closure objectives to achieve that must be approved by the Regulator (not simply agreed between the Regulator and the developer) and that the process of this approval can only happen after public participation has taken place.

The importance of public participation

Affected communities should be able to participate in closure planning and implementation.  In fact, the regulations should go further to describe what that participation should look like. Where a viable economic activity post-closure has been identified, the approved mine closure plan should also make clear where ownership of those alternative economic activities lie.

This includes measures to promote the participation of women, LGBTQI+ persons and other marginalised groups. Community ownership is important and the notion of a sustainable end state should include the training of community members and retrenched mine workers in order for them to be able to adapt and work in the alternative economies created, as well as assume ownership of those economies.

It is also very important that vehicles for community ownership and training opportunities prioritise women, LGBTQI+ persons and other marginalised groups, especially given the disproportionate manner in which mining negatively impacts women.

Mine closure is characterised by critical challenges that include, among others, environmental destruction, polluted water and contaminated soil a rise in poverty, inadequate provision of services, lost livelihoods and unemployment. It isn’t enough for the Regulator and the mining company to agree that planting grass on a mining site even begins to rehabilitate the impact of its operations.

Public participation at the planning stage by all who will be affected by the proposed mine, combined with a binding requirement to develop predetermined and defined post mining land uses (including concurrent economic diversification planning at prefeasibility stage) will begin to address these critical challenges. Prioritising such a binding requirement in the regulations would acknowledge that diversification of economies is key to a just transition that aims to eradicate poverty and inequality.

In 2015 dramatically improved financial provision regulations were introduced but they only came into effect for new mines. Given that mining rights often last for periods of 30 years, there are many existing mines that are not yet subject to these better regulations.

This means that the state and mining-affected communities are exposed to failed or absent environmental rehabilitation, or worse, mines being abandoned by polluters who cause serious environmental degradation without suffering any consequences.

It is critical that the improved protection provided for by the 2015 Financial Provision Regulations under NEMA is brought into effect, requiring that all mining companies are subject to the NEMA regime that has been in place since 2015.

Delaying compliance with that regime (or set of laws) or the new regulations once the 2021 draft proposed regulations have been gazetted, facilitates ongoing violations of NEMA and Section 24 of the Constitution, which says that people living in South Africa have the right to an environment that does not harm their health or well-being.

It is therefore of the utmost importance that all mining companies, at all of their operations, both new and existing, are held to the highest standards of rehabilitation. They must provide adequate financial provision to ensure that the harm that they cause to the environment can be properly rehabilitated.

On 27 August 2021, the Minister published new draft Regulations for Financial Provisioning for the Mitigation and Rehabilitation of Environmental Damage Caused by Reconnaissance, Prospecting, Exploration, Mining or Production Operations (the 2021 Draft Financial Provisioning Regulations) for comment by the public. Now that she has received comments on the draft, the final version is expected to be published in early 2022.