The system consists of a controller, pumps, and a battery and is embedded into a portable unit weighing 9.25 kg and measuring 42 cm × 33.5 cm × 19 cm. It can produce 0.33 liters per hour and can be controlled by a smartphone.

The researchers used artificial intelligence to improve the device’s ion concentration polarization (ICP) technique, which in the proposed system applies an electrical field to membranes placed above and below a channel of water.

“The membranes repel positively or negatively charged particles – including salt molecules, bacteria, and viruses – as they flow past,” they explained. “The charged particles are funneled into a second stream of water that is eventually discharged.” 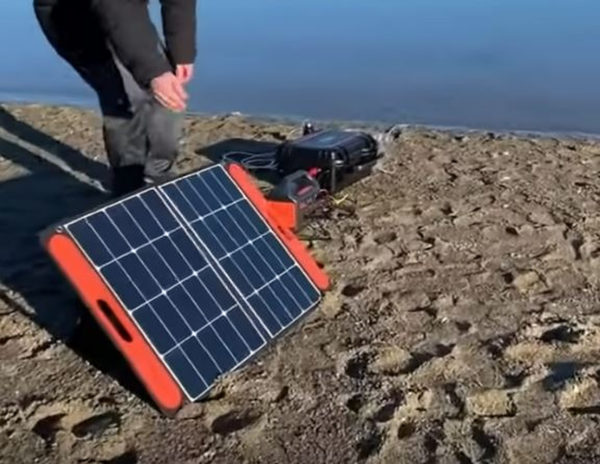 The scientists tested the device on a beach near Boston.
Image: Massachusetts Institute of Technology (MIT)

They said this improvement removes both dissolved and suspended solids and enables the system to require lower energy consumption, as it only needs a low-pressure pump. They also used electrodialysis, which is a process for the separation of ions in saline solutions, to remove the remaining salt ions that the ICP process is unable to eliminate.

“The optimal setup includes a two-stage ICP process, with water flowing through six modules in the first stage then through three in the second stage, followed by a single electrodialysis process,” they said.

The academics tested the device at Boston’s Carson Beach, using water with different salinity and turbidity levels. They found it is able to desalinate brackish water and seawater into drinkable water.

The prototype only requires 20 W of power per liter. “Right now, we are pushing our research to scale up that production rate,” said the MIT researchers. They presented the device in “Portable Seawater Desalination System for Generating Drinkable Water in Remote Locations,” which was recently published in ACS Publications.