You are at:Home»Headline News»Is Climate Change to Blame for KwaZulu-Natal’s Flood Damage?

Many have called it South Africa’s deadliest storm on record, and the country’s leaders have blamed climate change for the widespread devastation. But is that accurate? Flooding is a frequent, annual and well-known hazard in South Africa. Cut-off low-pressure systems have caused comparable events before, including in KwaZulu-Natal.

A remarkably similar system was responsible for the infamous September 1987 floods in the province that killed 506 people after 900 mm of rain were recorded over four days. In April 2019, another cut-off low-pressure system brought 170 mm of rain to the Durban area (Chart 1). About 80 people died in the resulting mud slides and flash floods.

A similar system caused the 1981 Laingsburg flood in the Western Cape. It killed 104 people when the Buffalo River burst its banks after a downpour of 425 mm in two days. In 1968, 400 mm of rain fell in just four hours in the south eastern coastal city of Gqeberha, in perhaps the most intense rainfall event in the country’s recorded climate history.

This said, evidence shows that climate change is increasing the intensity and frequency of storm systems worldwide. And the Intergovernmental Panel on Climate Change recently assessed that an upward trend in extreme rainfall events can already be detected in Southern Africa’s eastern parts.

Flooding is a frequent, annual and well-known hazard in South Africa

Further rises in intense rainfall events are projected in the region for as long as the world continues to warm. Formal climate change attribution studies will probably confirm that the phenomenon indeed intensified this year’s floods, although such disasters occur in the province due to natural climate variability.

KwaZulu-Natal’s April 2019 floods and mud slides should have been a reminder of how vulnerable the province is to heavy rains. Many communities live below flood lines along river banks and on steep slopes. Rivers such as the Mgeni and Mvoti that transverse the larger Durban area have long been known to cause severe flooding during periods of heavy rainfall. 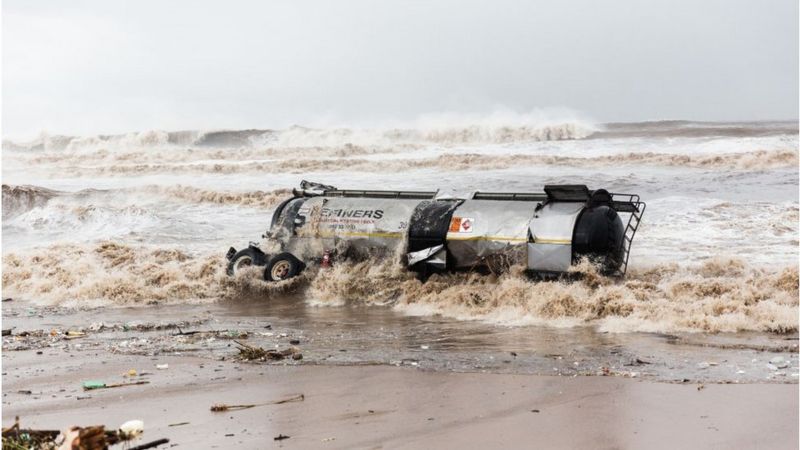 Tanker washed into the ocean by floods in Kawazulu Natal. Image credit: AFP

This situation isn’t unique to the province. A recent risk assessment in Tshwane revealed that more than 35 000 dwellings – half of these informal – are located below the indicative flood line. Population growth, unregulated informal growth, a lack of land use zoning enforcement and inadequate stormwater systems all contribute to growing flood risks.

South Africa has experienced over 40 flooding disasters in the past 40 years, killing on average 46 people annually. During this period, floods cost the country upwards of R35 billion in direct losses, such as infrastructure damage. Wide-ranging indirect losses of informal homes, assets and other livelihood assets are undercounted and often uncompensated.

SA lacks collective memory about floods because it doesn’t have a reliable disaster database
Despite these historical vulnerabilities, South Africa lacks collective memory about disasters since it doesn’t have a reliable disaster loss and damage database. Local, provincial and national governments haven’t been proactive enough in planning and building resilience, and the current early-warning systems and flood mitigation measures are inadequate and outdated.

Risk warnings in informal settings are further complicated by residents who, despite being aware of the dangers, are often overwhelmed by the new nature and magnitude of these threats. Many communities are uninformed about climate risks, and the lack of alternative dwellings means they may resist warnings and refuse to move when offered substitute locations.

Alongside climate change, South Africa faces the growing exposure of vulnerable communities. Cities are proliferating and 24 million more people will be living in urban areas by 2050. Much of this growth will be informal, unregulated and likely on unsafe, high-risk vacant land. Uncontrolled urbanisation and a lack of land-use zoning enforcement are compounding climate risks. Every second city and town is projected to experience increased flooding by mid-century.

The country needs a two-pronged response to these challenges. The first – improving early-warning systems – is short term, given the high levels of current vulnerabilities. Climate science is well-advanced, and such systems can provide reliable warnings one to three days ahead of major floods.

With its high level of vulnerabilities, South Africa must improve its early warning systems
Local authorities must urgently develop contingency plans that include the relocation and evacuation of thousands of people in days. Municipal facilities should be ready to serve as emergency shelters during flooding and for cooling centres in extreme heatwaves.

The second part of the response is to reduce systemic vulnerabilities through climate change adaptation. High-risk land exposed to natural hazards must be identified and indicated on land-use schemes. Zones designated unsuitable for development must be adhered to and enforced. Local governments should guide development, even if informal, onto safe and well-located land. High-risk communities must be consulted and educated about the risks and alternative housing sites provided for relocation.

At-risk infrastructure must be identified and protected through flood control mechanisms. New infrastructure investments should consider extreme rainfall events and climate adaptation needs in the planning, design and construction phases.

All of society must be involved in these responses. Adaptation financing will be needed to spearhead them, and it must be directed towards measures that reduce flood risks and increase communities’ resilience. Without the necessary action, flooding will continue to cause widespread devastation.

This article was first publish by the Institute of Security Studies and is republished with permission.