You are at:Home»Headline News»Final Commissioning Starts on the 15.57 MW Kikagati Hydro Plant Shared by Uganda and Tanzania

Construction of the plant started in August 2019. The plant consist of an 8.5m-high dam of 300m in length, three turbines of 5.19 MW each and associated earthworks, control and plant rooms and allied infrastructure connecting the plant via a 33 kV line to switchyards in Uganda and Tanzania. Around 250 people were involved in the construction works. 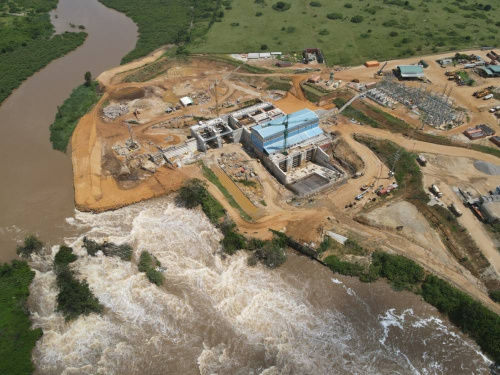 The 15.57 MW Kikagati hydroelectric power plant as it was under construction. Image credit: Berkely Energy

The Kikagati hydroelectric plant has a capacity of 15.57 MW. Its dam is located on the Kagera River, the largest tributary of Lake Victoria, which serves as the natural border between Tanzania and Uganda. The dam is 8.5 m high and 300 m long, forming a reservoir on 4 km2 of Tanzanian territory. The electricity produced by the hydroelectric plant is evacuated via a 33 kV line.

KPC will sell its output to Uganda Electricity Transmission Company Limited (UETCL and Tanzania Electric Supply Company (TANESCO). The project, which is nearing final completion, will add up to 115 GWh of electricity per year to the power grids of both countries.