China is the world’s largest carbon emitter, accounting for 28% of global emissions in 2018.Progress toward carbon neutrality will be no small feat as its energy demand and emissions are still rising.Around 90% of China’s emissions come from electricity and heat production, industry, and transport.

“As China becomes a more developed economy, it should carry more responsibility in fighting climate change. Especially as a faster transition will also bring more opportunities for China’s manufacturing sector.” said Nannan Kou, head of China research at BNEF. “Better and cheaper clean technologies such as PV panels and batteries will benefit the transition of every country.”

Produced in partnership with Bloomberg Philanthropies, this report uses the New Energy Outlook, BNEF’s annual long-term scenario analysis on the future of the energy economy, to consider two scenarios for China. The first is the Economic Transition Scenario, an economics-led scenario that employs a combination of near-term market analysis, least-cost modeling, consumer uptake and trend-based analysis to describe the deployment and diffusion of commercially available technologies.

Second, the report takes into account the Accelerated Transition Scenario, building upon the Economic Transition Scenario results. Post-2023, this scenario considers a higher rate of direct electrification in road transport, buildings and industry, combined with increased uptake of zero-emission electricity supply to deliver a larger and cleaner power system.

The Accelerated Transition Scenario sees electricity accounting for 53% of final energy consumption by 2050, some 92% of which is delivered by zero-carbon power sources dominated by solar and wind, with hydrogen-fueled gas turbines providing balancing needs. This faster transition sees emissions in the power sector peak as early as 2024, and decrease quickly thereafter, by around 150 million metric tons year-on-year every year, despite rising electricity demand. This makes it much easier for China to reach its carbon neutrality goal by 2060.

“Electrification will only help China deliver on its carbon neutrality goal if it is combined with a rapid reduction of the emissions intensity of power generation“, said Yvonne Yujing Liu, senior analyst at BNEF and lead author of the report. “China should continue to make progress on its power market reforms to create conditions that are conducive to investment in renewables, and to the replacement of coal power generation by cleaner, innovative alternatives.”

While China’s solar and wind industry are already well established, a larger market will lead to a new phase of growth. More importantly, under the Accelerated Transition Scenario, China has the opportunity to use its own domestic market – as it did effectively with solar, battery and EV manufacturing – to achieve global leadership in new technology areas such as electrolyzers for hydrogen production.

Zero-carbon, dispatchable options, such as gas turbines fueled by hydrogen, will be crucial for any power system that aims to achieve aggressive decarbonization. Wind and PV can deliver cheap generation, but they are not available round-the-clock. Hydrogen can be produced cleanly by splitting water using renewable electricity in a device called an electrolyzer. This equipment is expensive, but costs have fallen by 40% in the last five years and could fall further if the industry scales up. China already has the lowest cost of electrolyzers. However, China is starting to fall behind European countries that have been announcing aggressive plans for electrolyzer deployment as part of their stimulus measures following the Covid-19 pandemic. China needs to consider policies supporting the use of hydrogen for sectors that are hard to decarbonize, such as steel and cement.

“As the world rebounds from the impacts of Covid-19, China’s commitment demonstrates that decarbonization is crucial to a full and true recovery,” said Ailun Yang, head of international climate & environment initiatives, Bloomberg Philanthropies. “This report shows that with dedicated resources and investment, China’s transition to a low carbon economy is not only possible but can be a driver of high-quality economic growth and prosperity.”

Launched at the BNEF Summit Shanghai, “China’s Accelerated Decarbonization” shows that China’s journey to carbon neutrality will generate trillions of dollars in new investment across all major low-carbon technologies. The solar, wind, electric vehicle and, increasingly, hydrogen sectors will play a central role, creating new opportunities for China’s industry at home and internationally. Accelerating the decarbonization of China’s economy will require reforms to continue and the mobilization of all public and private stakeholders of the energy sector. 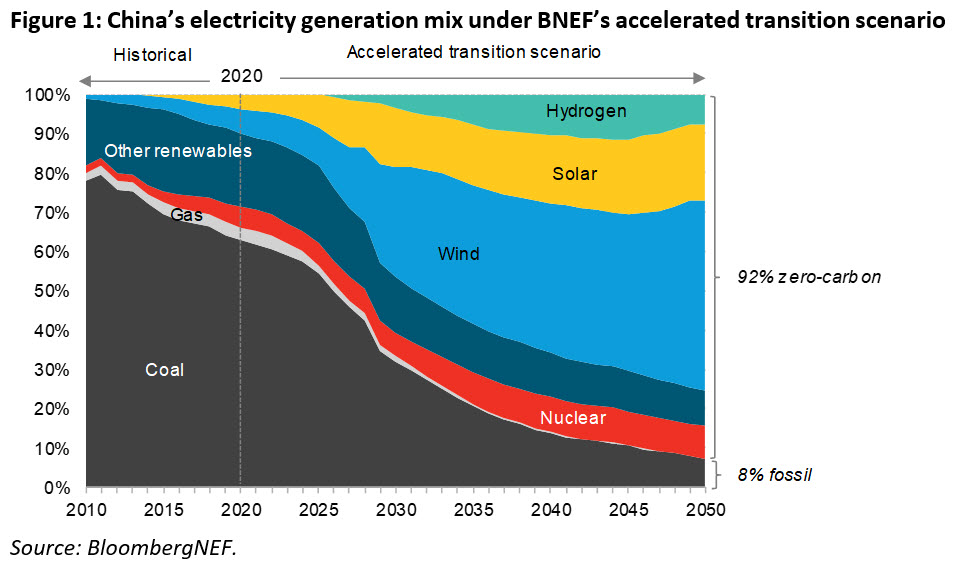