You are at:Home»Headline News»Laser Bird Control at Solar PV Installations

The lasers are class 3B, with an output power of 5 and 499 milliWatts. Class 3B can be hazardous for the human eye when exposed directly and for an extended period. Bird Control Group states that their deterrent products have an expanded beam, which ensures that only a small percentage of the laser’s potential can enter the eye.

The unit can plug into standard 240V electricity, or run on its own 24V solar and battery standalone system. The beams are green because birds perceive green lasers best, and they have an effective distance of 300 to 600 meters in full sun. At night, the lasers can be effective as far as 1.5 miles away.

In New England, gulls can be a nuisance, as they are known to drop quahogs onto solar panels. And even when they’re not directly damaging panels, their droppings can be a nuisance, covering panels, roofs and cars in droppings and clogging drains. One laser installed on a roof in the Netherlands in 2014 showed a 90% reduction in seagull activity – a figure that ought to raise a few eyebrows among solar developers and owners of larger solar power facilities near oceans and lakes.

For crop protection, most bird problems were addressed at dawn and at dusk, when birds were actively feeding. The reduced sunlight at these times also helps the laser work more efficiently. 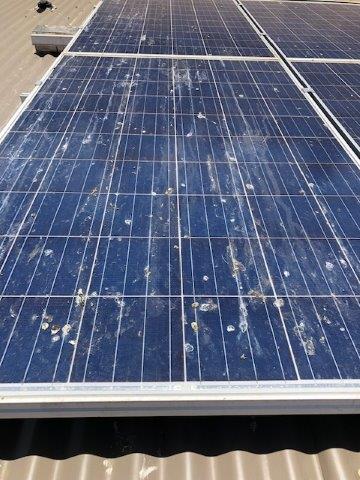 In its online videos, the company notes that a standalone unit costs around $20,000 with the 24V solar panels, battery, controller, and wiring. Alternative bird control devices rely on noise, like propane cannons or bird squawkers. These devices are cheaper (a professional squawker is around $1,600), but your neighbors won’t appreciate the noise, and after a while most birds learn to ignore them anyway.

Another excellent use for these devices is to limit the spread of avian influenza from wild to farmed populations on free-range poultry farms. When lasers were tested on such farms during the day and night, the university team found a decrease of 99.7% in wild ducks visiting the area. Other wild birds decreased their visits by greater than 96%. When the laser was turned off, wild geese returned to the surrounding grass pastures.

For farmers and solar developers seeking to integrate agrivoltaics, and may be concerned with damage and contamination from bird feeding and droppings – the unit has already been proven effective across several agricultural scenarios. Berries, grapes, sunflowers, sweetcorn, and many other farmed products are delicacies for local bird populations. Despite the temptation, birds at these sites were well deterred by the lasers.

One corn farmer said that he believes his system paid for itself in the first year, by decreasing his sweetcorn losses by 70%.

The Frankfurt Airport is using the handheld, manual version of the laser. The airport is surrounded by forests and grassland that birds love. They have extensive experience dealing with birds, and are of course conscious of the hazards lasers present to pilot’s eyes when operating aircraft. Wildlife Control Coordinator Jürgen J. Ebert explains that the device’s patented Horizon Safety System, “makes it easier for authorities to permit the use of [the]laser at airports.” Prior to using the Aerolaser, the airport used pyrotechnics, shotguns, and loudspeakers. The best results were found among birds that tend to sit on the ground more.

The company now believes its product will fit in well with the solar industry, especially as the market shifts toward agrivoltaic systems.