You are at:Home»Headline News»ArcelorMittal South Africa: Activists Protest at AGM Over Air and Water Pollution 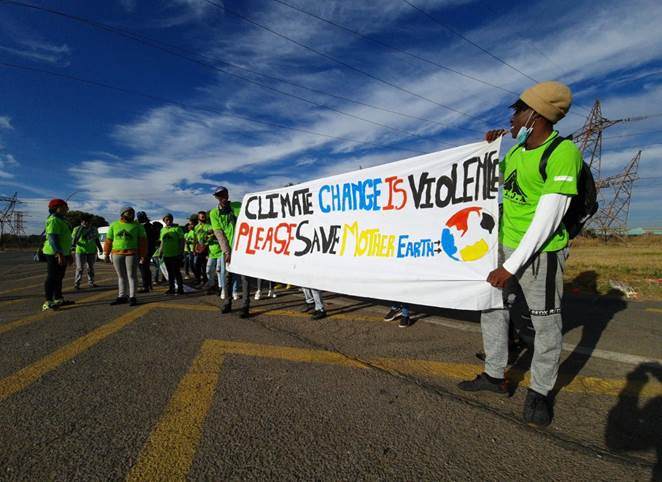 Community members participating in AMSA’s AGM as activist shareholders, remain concerned about the company’s failure to transform its approach to pollution and engagement with communities. We believe that AMSA continues the unscrupulous legacy of its parent company, Iscor Mittal Steel.

According to Samson Mokoena of VEJA, “the culture of secrecy at AMSA was inherited from its parent company Iscor which was a state-owned company that privatised in the 1990s. The company destroyed and poisoned the community of Steel Valley, west of its operation.” He says further that “Iscor denied that it was poisoning the community and refused to disclose documents that show how pollution is moving from its operations to local people and why the company is not informing the community about the pollution.

This year, communities will participate inside and outside the AGM, while maintaining a strong digital media presence. “We will use all avenues available to us to ensure that our demands are heard by management, shareholders, and directors of ArcelorMittal,” says Kenny Matili of VEJA.

VEJA has been challenging the steelmaking company for years. In 2002, the Steel Valley Community and participants from all over the world, confronted the ArcelorMittal Group at the World Summit on Sustainable Development. We raised issues around the company’s refusal to disclose their master plan, between 2008 and 2009. VEJA and its international partners, Friends of the Earth and affected communities from Kazakhstan, Liberia, US, Czech Republic, attended the international AGM in Luxembourg where a set of demands were tabled before the ArcelorMittal Group Chairman and CEO, Lakshmi Mittal.

We note that the government of Department of Environmental Affairs is taking some action against AMSA. Summons was served on the company in 2019 instituting criminal proceedings for three violations of its Atmospheric Emissions Licence issued to Vanderbijlpark Works. This year the court accepted AMSA plea agreement and the company was sentenced to a fine and ordered to make a payment to the national environment department amounting to R3.64 million.

However, these steps are not enough. AMSA is in non-compliance with a number of laws and regulations, related to their water use licence, zero-effluent discharge and air pollution. They have also applied for and obtained the suspension of environmental standards which are in place to protect the environment and people’s health and well-being.

Communities of Sebokeng. Sharpeville, Bophelong, Boipatong, and Sasolburg will again be protesting outside ArcelorMittal South Africa Vanderbaijlpark, to hand over a memorandum of demands to management, demanding that ArcelorMittal comply with environmental laws and standards and stop the pollution of air and water. AMSA also needs to manage the safety of their operations and ensure that workers’ rights are protected.