You are at:Home»Opinion»Urban South Africa is ill-Prepared for the Coming Climate Change Storm

South Africa is no stranger to the devastating impacts of weather-related hazards such as floods, wildfires, storms and droughts. These events have wreaked havoc on infrastructure and communities, causing devastating economic and social losses. Without urgent adaptation measures, South African cities and towns will be hard hit, leaving millions exposed and vulnerable to climate change.

Recent disasters such as the Western Cape drought, the 2017 Knysna fires and floods in KwaZulu-Natal and Gauteng in 2019 illustrate just how susceptible our cities and towns are to these dangers. Only five months into 2021, all nine provinces have experienced floods on top of a series of devastating fires in the Western Cape.

These incidents are not isolated or new. The International Disaster Database recorded 90 noticeable weather-related disasters in South Africa since the early 1980s (see graph). These events caused R95 billion in associated economic losses and directly affected around 22 million South Africans.

While it’s clear that these hazards are a frequent occurrence, it is worth noting that there has been a 57% increase in recorded events over the past two decades compared to the preceding two. Climate scientists also warn that this growing trend of economic and social costs will likely continue into the next couple of decades.

Three prominent factors in the risk equation will increase disaster losses in South African cities and towns. The first is the direct impact that climate change will have on weather-related hazards. While global efforts and investments in cleaner technologies are picking up speed, they still fall short of what is needed to achieve the 1.5 ̊C temperature threshold set by the Paris Agreement. This places the world on an intermediary mitigation trajectory.

For South Africa, this trajectory will translate to temperature increases across the country by as much as 3 ̊C in the northern provinces of North West and Northern Cape. Heatwaves and extreme temperature days will increase for all non-coastal settlements. Storms are likely to become more severe in KwaZulu-Natal, the Eastern Cape and Free Sate.

Weather disasters have increased 57% over the past two decades compared to the preceding two.

A second contributing factor is that communities are more exposed to weather disasters than before. The building inventory created by GEOTERRAIMAGE lists 4.8 million informal dwellings across South Africa in 2021. This is a staggering growth of 146% over the past two decades, compared to a population increase of only 32%. Many of these dwellings are severely exposed to heatwaves, floods and wildfires and are located on marginalised and risk-prone land.

Current projections are for a further population growth of 24 million people over the next three decades, most of which will occur in urban areas. This expected increase coupled with poor land-use practices, housing backlogs and slow economic growth will expose even more people to the impacts of floods, wildfires and droughts.

The current design and construction of roads, bridges and storm-water systems, for example, use drainage manuals that consider historical rainfall data. The manuals do not yet look at the future impact of climate change on flood and run-off calculations. Infrastructure built with observed historical conditions in mind is less likely to be resilient for future situations. This will contribute significantly to the damage experienced in the next couple of decades.

Current costs are already eroding development gains at an alarming rate. Only 16% of the R95 billion losses due to weather-related disasters in the past four decades were covered by insurance, leaving governments and communities unable to build back.

Simultaneous failure in all three areas outlined above will wreak havoc on South African cities by the middle of the century. The rise in the frequency and intensity of weather disasters combined with a growing and urbanising population, poor land-use practices, growing informal settlements and slow deployment of resilient infrastructure is likely to result in significant losses.

The CSIR’s Green Book made publicly available in 2019 has quantified these risks. It estimates that under a low mitigation scenario and without mainstreaming adaptation in urban planning (a type of worst-case scenario), all of South Africa’s 1 600+ towns will likely experience some degree of economic and social loss by 2050. 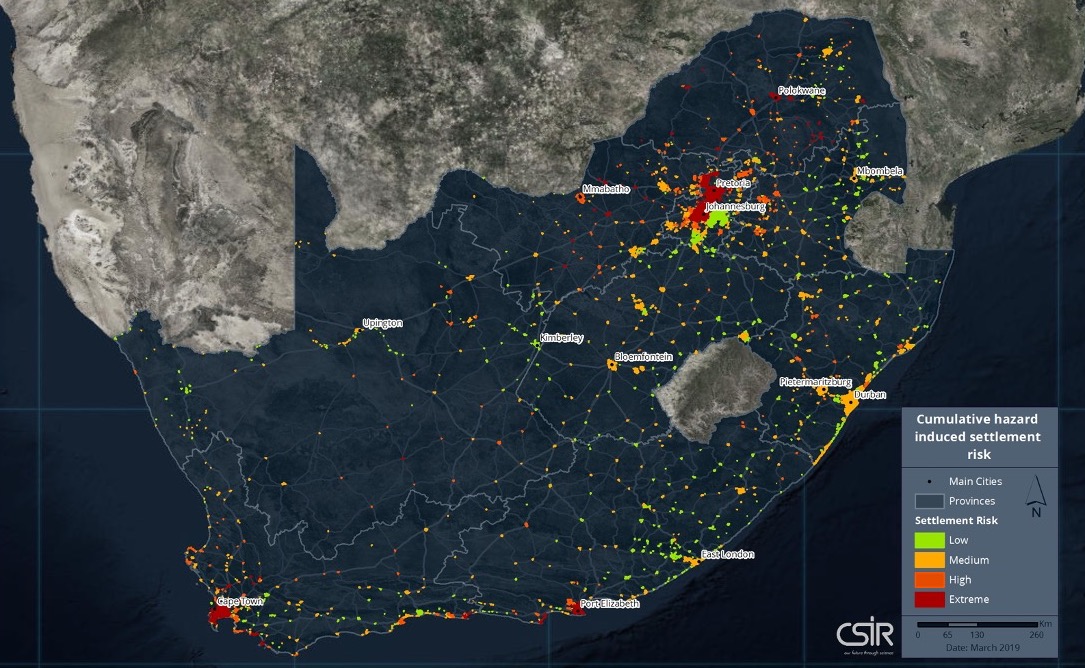 Source: CSIR
(click on the map for the full size image)

The Green Book risk map for cities and towns considers the impact of a changing climate and growing population on resource use and risk exposure. The analyses highlight that four of the eight metros in South Africa – Cape Town, Tshwane, Johannesburg and Nelson Mandela – will experience extreme increases in disaster losses. Nine of the 10 most at-risk cities and towns in 2050 will be located in the Limpopo province.

The Green Book highlights that 22% of settlements across the country (highlighted with red and orange in the map above) need to urgently mainstream climate adaptation into local planning practices to avoid significant economic and social losses.

Action must be taken without delay. South Africa has a well-developed National Climate Change Adaptation Strategy (NCCAS) that outlines nine strategic interventions for transitioning to a climate-resilient country. These aim to build climate resilience at all levels of society, integrate adaptation responses into all sectors and plans, improve the understanding of driving forces and ensure the resources and systems are in place to enable implementation.

The actions have been outlined but implementation is slow and ad hoc. Although the private sector and civil society are mentioned throughout the strategy, their roles are critically undervalued. To achieve a level of adaptation that will safeguard communities and infrastructure, these two sectors must be more involved.

This article was originally published by the Institute for Security Studies (ISS) and is republished with permission. Link to the original article HERE