All concentrating solar power (CSP) technologies use a mirror configuration to concentrate the sun’s light energy onto a receiver and convert it into heat. The heat can then be used to create steam to drive a turbine to produce electrical power or used as industrial process heat.

CSP systems can be also combined with combined cycle power plants resulting in hybrid power plants which provide high-value, dispatchable power. They can also be integrated into existing thermal-fired power plants that use a power block like CSP; such as coal, natural gas, biofuel or geothermal plants.

CSP plants can also use fossil fuel to supplement the solar output during periods of low solar radiation. In that case, a natural gas-fired heat or a gas steam boiler/reheater is used.

There are four types of CSP technologies, with the earliest in use being trough, and the fastest growing as of 2017 being tower. For each of these, there are various design variations or different configurations, depending on whether thermal energy storage is included, and what methods are used to store solar thermally. 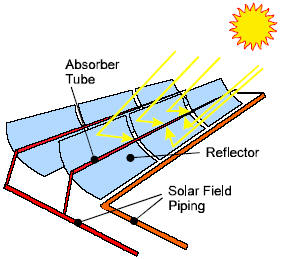 In a parabolic trough CSP system, the sun’s energy is concentrated by parabolically curved, trough-shaped reflectors onto a receiver pipe running along about a meter above the curved surface of the mirrors. The temperature of the heat transfer fluid flowing through the pipe, usually thermal oil, is increased from 293ºC to 393ºC, and the heat energy is then used to generate electricity in a conventional steam generator.

A collector field comprises multiple parabolic trough-shaped mirrors in parallel rows aligned to enable single-axis trough-shaped mirrors to track the sun from east to west during the day to ensure that the sun is continuously focused on the receiver pipes. As of 2018, 90% of the CSP in commercial operation is trough. 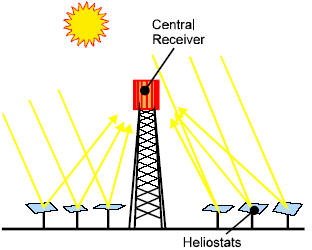 Power tower or central receiver systems utilize sun-tracking mirrors called heliostats to focus sunlight onto a receiver at the top of a tower. A heat transfer fluid heated in the receiver up to around 600ºC is used to generate steam, which, in turn, is used in a conventional turbine-generator to produce electricity.

The earliest power towers utilized steam as the heat transfer fluid, which does not lend itself to storage.  Khi Solar One in South Africa and Ivanpah in California operate commercially by directly heating water to steam. But Gemasolar (2011), Crescent Dunes (2013), and Noor III (2018) use molten salts because of their superior heat transfer and energy storage capabilities.

A great deal of research is investigating various other heat transfer or energy storage materials because of potential to attain higher temperature with resulting efficiency gains leading to lower costs. This ranges from air to sand particles, to alternative chemical mixes. 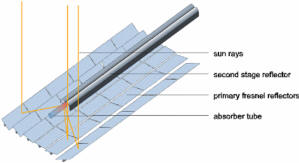 Similar to the long arrays of a parabolic trough CSP system, a Linear concentrating collector field consists of a large number of collectors in parallel rows. These are typically aligned in a north-south orientation to maximize annual and summer energy collection. The mirrors are laid flat on the ground and reflect the sunlight to the pipe above. Like trough and tower, Fresnel can also incorporate storage in a power block, or generate steam for direct use. 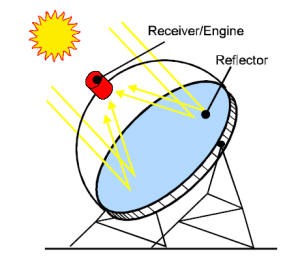 A Parabolic dish system consists of a parabolic-shaped point focus concentrator in the form of a dish that reflects solar radiation onto a receiver mounted at the focal point. These concentrators are mounted on a structure with a two-axis tracking system to follow the sun. The collected heat is typically utilized directly by a heat engine mounted on the receiver moving with the dish structure. Stirling and Brayton cycle engines are currently favoured for power conversion.