You are at:Home»Headline News»The Energy Sector in Sub-Saharan Africa Can Become 100% Renewable by 2050

Whether or not Africa can meet its growing energy needs and at the same time become 100% renewable is the main question asked in a recently published study addressing the world’s future energy system.

The energy sector in sub-Saharan Africa can become 100% renewable by 2050, leading to lower energy costs, better health and environment and the number of direct energy jobs in Africa increasing from 1,2 to more than 5 million in 2050. An accelerated scaling of wind and in particular decentralised solar PV energy can, in combination with electrification of transport, cooking, heating and desalination and deployment of batteries and other storage technologies, result in a complete phase-out of fossil fuels in Africa within 2050.

These are among the findings in an important new research report, “Global Energy System based on 100% Renewable Energy”, recently published by LUT University in Finland and the Berlin-based Energy Watch Group. The report shows that technologies for renewable energy, batteries and electric motors now have become so mature that they can fully replace oil and gas over the next 30 years, at a lower cost than today’s fossil-based energy system. Is this realistic?

The key driving force in the study is that electricity from sun and wind now have become cheaper than the fossil alternatives and that the price difference will increase significantly in the years to come. This growing price divergence implies that it will become increasingly attractive to close down coal and gas power plants in the period up to 2030 and beyond. 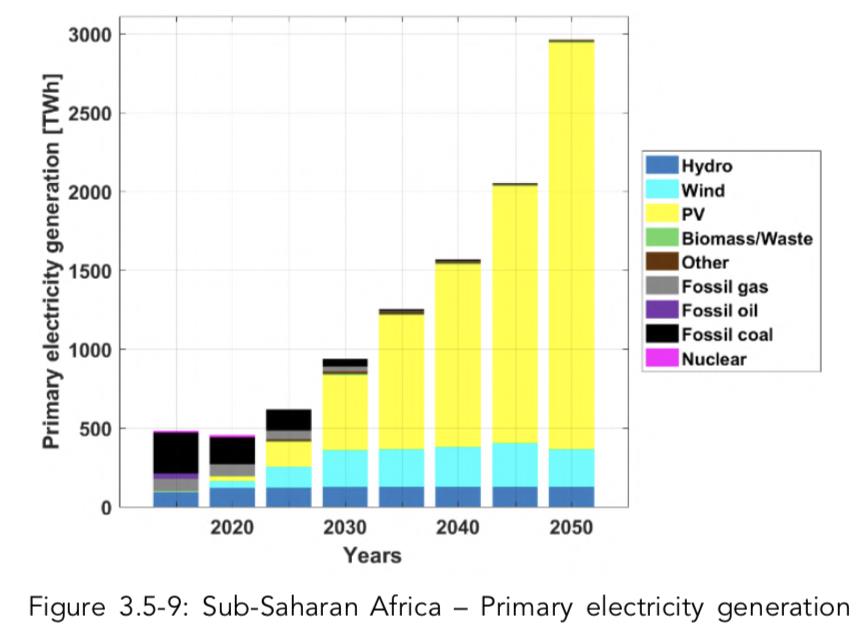 Pic: The figure shows primary electricity generation in Sub-Saharan Africa during the energy transition from 2015 to 2050. (Source: Figure 3.5-9 in the LUT/Energy Watch Group report.)

The main factor explaining why this radical transition can materialise at lower costs is the replacement of combustion engines and fossil heat sources with electric motors, fuel cells, electric heat pumps and the like. This transition, called electrification, simultaneously translates into a remarkable reduction in energy consumption, as the fossil-based technologies are less efficient than the electric ones.

Consequently, in the LUT / Energy Watch study, the world’s primary energy consumption does not increase by more than 20%, from about 125 to 150,000TWh in the period up to 2050. In sub-Saharan Africa, the primary energy demand increases from about 2,700TWh in 2015 to around 6,800TWh in 2050. If one were to deliver the same amount of end-user energy with the current mainly fossil fuel-based system, the primary energy demand in sub-Saharan Africa would reach nearly 14,000TWh by 2050 and the global consumption would have been 300,000TWh.

While the report predicts that the bulk of power generation can be decarbonised by 2030, it will take longer to replace fossil fuels in the transport sector. Electrification of road traffic will come first. From 2030 onwards, the researchers predict synthetic fuels to play a significant role, made with the Fischer-Tropsch process from bio-waste and Jatropha plants grown in non-productive rural areas in the south.

In the period up to 2050, liquid gases such as hydrogen and methane, produced from cheap solar and wind power, will have replaced a large part of the fossil fuels currently used in heavy shipping and air traffic.

As a result of this focused decarbonisation, annual emissions of greenhouse gases fall steadily until they are completely gone by 2050. The total emissions in this ambitious low-emission scenario amount to just over 420 Gigatons of CO2 equivalents, which according to most studies provide more than 50% likelihood that global warming will not exceed 1.5 degrees. Yearly emissions from sub-Saharan Africa decreases from 8 Gigaton to zero in 2050, which is impressive, particularly given the region’s expected increase in population from 989 to 2,189 million by 2050. 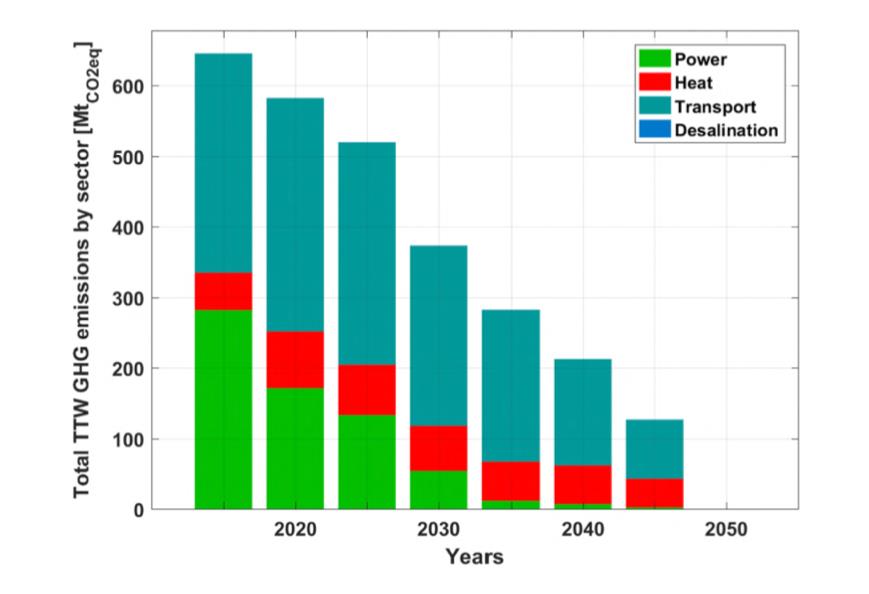 Pic; The figure shows the sector-wise GHG emissions in Sub-Saharan Africa during the energy transition from 2015 to 2050. Tank to Wheel (TTW) considers GHG emissions from readily available fuels and does not consider GHG emissions from the upstream production and delivery of fuels. (Source: Figure 3.5-30 in the LUT/Energy Watch Group report.)

The realism of such studies is of course critically dependent on the underlying assumptions. In my view, the assumptions applied by the researchers do not seem particularly optimistic. A halving of the cost of solar energy and a 75% reduction in the cost of battery storage up to 2050 is entirely within the industry’s own estimates; the same applies to the assumed 60% reduction in capital costs for making hydrogen with water-electrolysis. What makes coal, oil and natural gas more expensive over time is above all the assumption that the average CO2 cost will increase evenly until 2050, from about $30 per ton in 2020 to $75 in 2040 and $150 in 2050.

But is it practically possible to increase the installation of solar PV energy from just over 500 gigawatts today to as much as 64,000 gigawatts in just over 30 years? In sub-Saharan Africa, the total installed generation capacity grows from 100GW in 2015 to around 3,200GW, with solar PV dominating, reaching almost 2,920GW by 2050. These figures may seem insurmountable, but the average yearly growth rate – 17 % – is nevertheless not too far from growth rates PV has experienced up to now. The market for electricity storage is expected to increase from 1TWh today to as much as 64TWh in 2050, while the plants that produce hydrogen and synthetic fuels will constitute a total of 14,000GW in 2050. This is also overwhelming, but still within what the industry itself believe is possible.

The investment cost of building a 100% renewable energy system by 2050, the researchers estimate to be EUR 62,000 billion. However, due to greatly reduced fuel costs, the study estimates that the average energy cost will be somewhat lower in 2050 than it is today. In sub-Saharan Africa, the transition away from fossil fuels even results in a decline in the levelised cost of energy, from around 52 €/MWh in 2015 to 47 €/MWh by 2050.

In addition, there are major socio-economic benefits of replacing fossil fuels with zero emission solutions, as well as political benefits of most countries becoming self-sufficient with energy. The number of direct jobs in the energy sector will also increase from approximately 20 million in 2015 to 35 million in 2050, and from 1,2 to more than 5 million in sub-Saharan Africa. 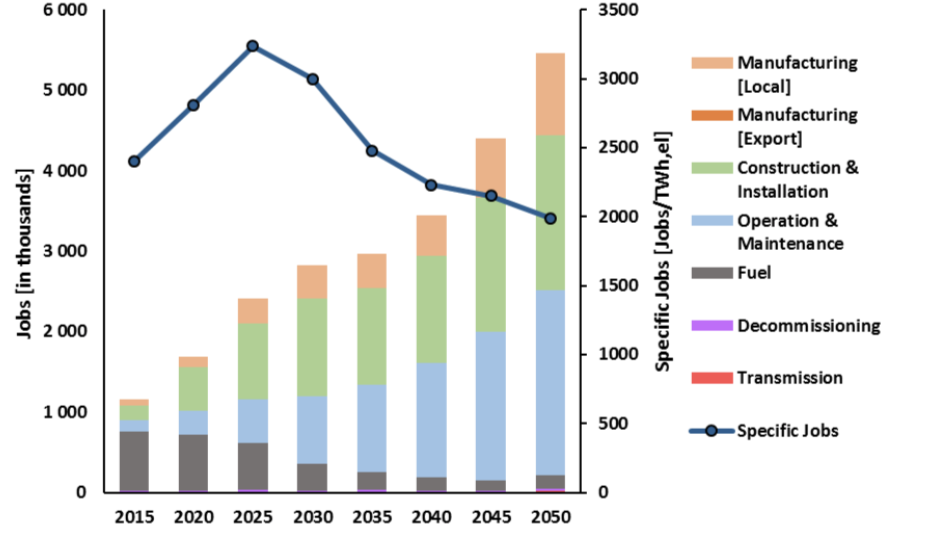 Pic: The figure shows jobs created based on different categories with the development of electricity demand specific jobs in Sub-Saharan Africa during the energy transition from 2015 to 2050. (Source: Figure 3.5-33 in the LUT/Energy Watch Group report.)

The LUT/ Energy Watch shows that a 100% renewable energy future within 2050 is both technically feasible, and economically beneficial. We are no longer dependent on technological breakthroughs to achieve the goals of the Paris Agreement. But even though governments must do a lot, it is also up to Africa’s energy leaders to show the way to a sustainable energy future. 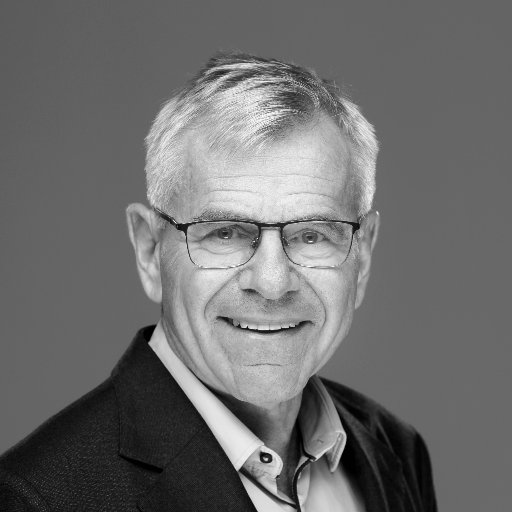 Terje Osmundsen is the Founder & CEO of Empower New Energy. During the opening session of African Utility Week and POWERGEN Africa conference and exhibition from 14-16 May 2019 in Cape Town, he is part of the keynote panel discussion on climate change. Mr Osmundsen is also an event ambassador. 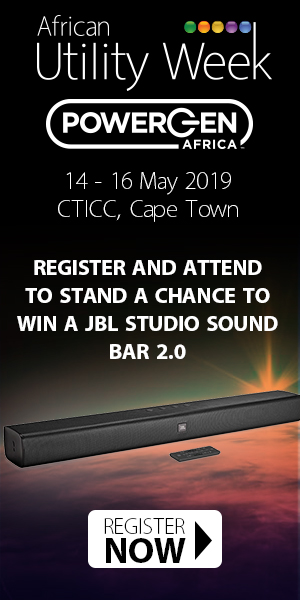