You are at:Home»Headline News»The “Cannibalization Effect” And How The Solar PPA Market Can Adapt

With more and more renewables set for development over the next decade, and renewed support in the form of the European Commission’s REPowerEU strategy, the cannibalization effect poses a serious threat in the long-run “to the viability of renewables operating on the free market,” according to Pexapark.

“Pricing cannibalization risk into your PPA is important to ensure your agreed pricing is far not only today but also throughout the tenor of the agreement when cannibalization impact is more prominent when renewables build-out increases,” it said.

Of course, the risk of cannibalization is already well-known.

“This is why in mature PPA markets,” the report states, noting that in Spain and Sweden, in particular, “we see the shift of buyers demanding baseload PPAs, and pay-as-produced (PAP) structures providing significant discounts, because the cannibalization risk has been factored in.” 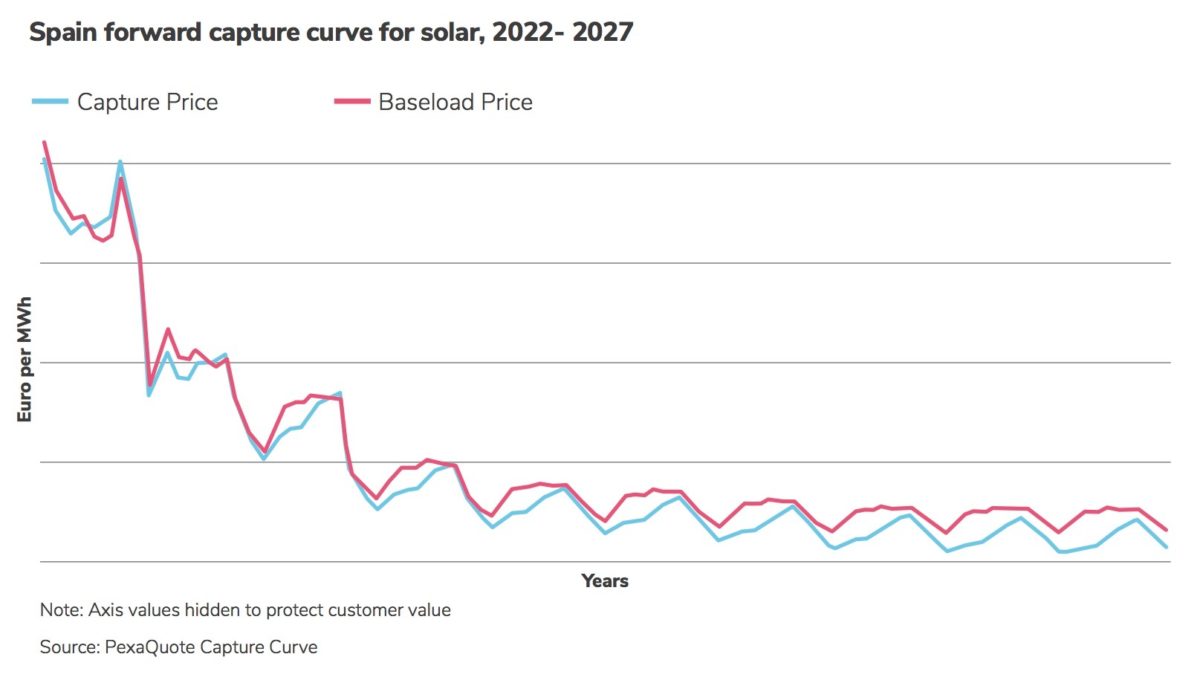 Pexapark estimates that capture rates will consistently fall below baseload rates, so cannibalization could reach up to 30% by 2030. Image credit: Pexapark

Maritina Kanellakopoulou, an analyst for Pexapark, told pv magazine that the reason for this higher interest in baseload PPAs is not driven by energy storage. “We see a notable surge of interest in the solar-plus-storage topic,” says Kanellakopoulou, “[The levelized cost of electricity] is still too high to allow for large-scale adoption.”

However, it’s not all doom and gloom.

“The higher interest in baseload PPAs is driven by the better demand and thus higher prices shown by utility offtakers,” said Kanellakopoulou. “For solar, baseload profiles have been called impossible, but physical backing by storage assets starts to make baseload hedging for PV assets much more palatable, as it addresses fears around the structural mismatch between production and contract profiles.”

Of course, baseload PPAs are more mature for wind assets in Nordic countries and also in Spain. Kanellakopoulou pointed to the recent deal between Alcoa and Greenalia as an example of this.

Because the market for PAP PPAs is becoming increasingly saturated by offtakers wanting to warehouse their cannibalization risk, costs are starting to become prohibitively high. According to Kanellakopoulou, “storage is a genuine alternative which is not based on trading. The most immediate action one can take, is to review co-location with battery storage, as it’s the quickest way to shield from the cannibalization effect.”

Werner Trabesinger, the head of quantitative products at Pexapark and a co-author of the report, told pv magazine “that baseload-profiled PPA contracts receive substantially better prices, as they do not shift the burden of cannibalization risk onto the offtakers. In other words, the economics of baseload – hedged PV assets is much more favourable.”

However, many project owners fear that entering into baseload hedges will push them into an active role in the spot markets.

“They fear is that spot markets might work systematically against them, causing poor overall performance,” said Trabesinger. “Colocated BESS assets help circumvent this issue, as they allow for storing production volumes for release during higher-priced hours. In this sense, they ‘future-proof’ assets against cannibalization issues.”

The LCOE is still too high for widespread adoption of co-located solar-plus-storage projects, but the higher revenue from higher PPA prices – combined with the cannibalization risk reduction provided by a BESS asset – significantly improves the profitability of such projects. As Trabesinger put it, “we feel that the tipping point might very soon be reached.