Over the past few days, unusual and persistent levels of sulphurous smells in the air have given residents of Gauteng a glimpse of what life is like for people who live in some of our country’s most polluted places on the Mpumalanga Highveld – one of the South Africa’s worst air pollution hotspots.

On Saturday, 13 February 2021, Gauteng Weather started reporting on the strong sulphur smell in Gauteng, and noted that southeasterly winds pointed in the direction of Mpumalanga as the source. Many residents of Gauteng noted complaints of breathing problems, burning eyes, blocked noses and bad chests on social media.

By Wednesday, the South African Weather Service issued an alert advising that air quality was “unhealthy” for sensitive groups, including children, the elderly, asthmatics, people with lung and heart disease.

According to air quality expert Lauri Myllyvirta, lead analyst at the Centre for Research on Energy and Clean Air  the rotten egg smell is a strong indicator that the pollutant in question is hydrogen sulphide, or H2S.

Sasol’s Synfuels facility in Secunda, Mpumalanga, is the main source of H2S in Mpumalanga.

The Department of Environment, Forestry & Fisheries (DEFF) said on Wednesday that it would investigate “elevated levels” of SO2 and H2S experienced in parts of Gauteng and Mpumalanga, and Sasol’s Secunda operation as a “possible source” of these pollutants. DEFF told the media that the Gert Sibande District Municipality’s air quality officer had been informed that Synfuels is experiencing “stressed conditions as the facility started ramping up operations”, and that it was asking Sasol to file an emergency incident report.

Despite this, air quality monitoring stations reporting into the South African Air Quality Information System (SAAQIS) noted that SO2 ambient levels have remained in compliance with ambient standards in Johannesburg, Pretoria and Mpumalanga. This was also the argument relied upon by Sasol, who, in a statement on Tuesday, said that neither air quality monitoring stations managed by the South African Weather Service’s or those managed by Sasol indicated any exceedance of “sulphur ambient air quality standards as set by government”. 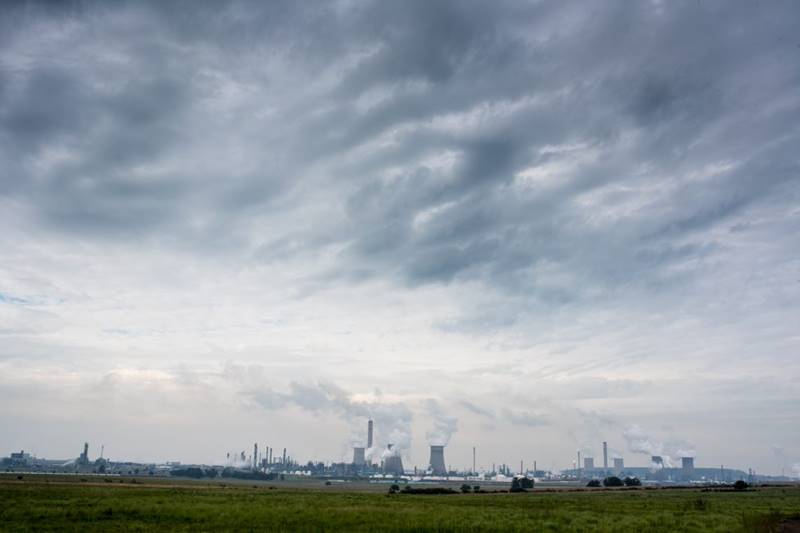 Despite the distinctive “rotten egg” smell of H2S reported in Gauteng, Sasol’s statement makes no reference to elevated ambient levels of H2S.

There are currently no ambient air quality standards for H2S in South Africa.

DEFF appeared to downplay public concerns of health impacts of H2S, saying that the pollutant “causes an odour nuisance even at concentrations far below those that cause health hazards”, and said that “people who are sensitive to unpleasant odours are likely to experience headaches and nausea.”

Meanwhile, a resident of Secunda who prefers to remain anonymous told CER: “The sulphur smell is always present here in Secunda, and only varies in intensity. But because the smell is permanent, we grow accustomed to it. Only when friends and family visit from out of town they say there’s this funny smell.”

The Secunda resident said that when there was cloudy weather, the pervasive sulphur smell in Secunda gets stronger as gases are trapped under the clouds. Gauteng and Mpumalanga have had several weeks of rainy weather.

Dispersion modeling for Secunda appears to confirm the resident’s assessment. Myllyvirta says that that atmospheric conditions, especially on Saturday morning, were “exactly right for high-altitude releases from Secunda to cause spikes in Johannesburg and Pretoria.”

“Based on my modeling of H2S from Sasol’s Synfuels plant for the Expert Panel, Secunda’s routine emissions are absolutely capable of breaching the odour threshold for H2S (less than 1ug) in the wrong atmospheric conditions, without violating its atmospheric emission licenceconditions. That is how weak the limits for H2S are in South Africa,” says Myllyvirta.

On Thursday morning, given the possibility that the source of the H2S is Sasol’s Synfuels facility in Secunda, CER wrote to Sasol to ask whether its review included data related to both SO2 and H2S, and requested the data from Sasol’s air quality monitoring stations, as well as a copy of its review.

“These are health issues that have long plagued those living near Sasol’s Secunda plant, in particular, says Rico Euripidou, Health Campaigner at environmental justice group groundWork. “Every day, people living near Sasol’s operations in Secunda are forced to breathe air that is severely harmful to their health. Despite a plethora of scientific evidence that informs us of the massive health burden of air pollution and decades of asking for government intervention and attempts to engage with Sasol, nothing is ever done to improve the situation. It is unfortunate that the pollution has to reach Gauteng for there to be renewed interest in an issue the people on the Highveld have faced for years.”

“If the H2S emissions exceed the permit limits of the particular emitter, that polluter may be guilty of a criminal offence under air quality laws, and liable to a R5 million fine, or to imprisonment for a period of up to five years”, says Nicole Loser, head of CER’s Pollution & Climate Change programme. “Even if permit limits are not exceeded, emitters have a legal obligation to take reasonable measures to prevent such pollution from occurring, continuing or recurring, or, in so far as such harm to the environment is authorised by law or cannot reasonably be avoided or stopped, to minimise and rectify such pollution.”

It is also a criminal offence under environmental legislation to unlawfully and intentionally or negligently to commit any act or omission which causes significant pollution – a crime that carries a fine of R10 million per offence.

Air pollution which causes harm to the health and wellbeing of people, particularly children, contravenes the Bill of Rights, which recognises the right to an environment not harmful to health or wellbeing. Even without health impacts, South African law recognises bad odours alone as sufficient to constitute significant harm to human wellbeing.

Air pollution may also give rise to claims by those who suffer damages as a result, including through a class action lawsuit.

In 2019, groundWork and the Vukani Environmental Movement, represented by the Centre for Environmental Rights, launched Constitutional litigation to request the court to declare that the poor ambient air quality in the Highveld Priority Area constitutes a violation of the right to an environment not harmful to health or well-being. That case, known as the Deadly Air case, will be heard in the Pretoria High Court on 17 May 2021.

In March 2020, the Minister of Environmental Affairs published  sulphur dioxide (SO2) air pollution standards that are twice as weak as the previous standards –  this despite strenuous and scientifically backed objections by many civil society organisations, and following a 2019 court case which forced the Minister to withdraw and republish the proposed weaker standard for public comment.