Designed by the Danish firm Dissing+Weitling, the bridge when complete, will have a main span of 580m supported from a pair of 127m-tall pylons. The deck will be 194m above the valley floor, making it the third highest bridge in Africa. The project is set to be completed by the end of 2025 or beginning of 2026.

“A local black contractor is leading the construction and already R120 million had gone into small, local businesses,” South African President, Cyril Ramaphosa, was speaking on Thursday this past week during an inspection of the under-construction foundation of the bridge in Lusikisiki. Concor Infrastructure and Mota Engil construction are the joint venture tasked with the contrcution of the bridge. 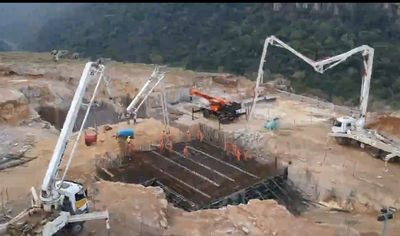 Ramaphosa added that the project would create between 21 000 to 28 000 indirect jobs during the construction phase and 8 000 direct full-time jobs when completed.

“These are jobs that didn’t exist here, now through this project, around about 28 000 indirect jobs will flow from this project, and if you add the 8 000 jobs that are going to be created during the life of this project, we are talking about a substantial number of jobs.

He also revealed that this translated to a wage bill of R720 million, with skilled and unskilled workers already employed in the project,” he said.

“The CEO of the main construction company was saying to me that they are also training local young people in this area, to be engineers. They are putting them through training, they are going to give them scholarships and they are going to make sure they become certificated engineers,” said Ramaphosa.

He said 62% of the total workforce of the bridge project were locals and of the 330 workers, 156 were employed by the main contractor, while local sub-contractors employed 173.

Black companies were at the helm of the project and that “pleases me”, he added.

PreviousAir Pollution: Most National Limits are Unsafe for Human Health – New WHO Guidelines
Next Agrivoltaics for Strip Farming