You are at:Home»Headline News»Senec Remotely Switches Off its Residential Batteries After Explosions in Germany

The remote shutdown relates to three products from the company: the Senec.Home V3 hybrid; Senec.Home V3 hybrid duo; and Senec.Home V2.1. The manufacturer describes the move as a “purely precautionary measure,” in a notice to the system operators published on its Facebook page. “This is a voluntary and preventive measure. There are no indications that there are any technical problems with our systems,” said Senec.

The background to the remote shutdown is three reports of explosions in houses in which Senec storage systems were installed. The fire department of Bodnegg, in Germany’s southern region of Baden-Württemberg, reported an explosion in an apartment building last week.

“When the first forces arrived, a house covered in smoke and a roof window that had been torn out, were explored,” says the report from the fire brigade. A heavily smoky boiler room was discovered in the basement. As it turned out, the battery storage installed in the basement detonated due to a technical defect and subsequently caused a smoldering fire in the basement. The pressure wave pushed several windows and doors outwards, and the entire roof structure was lifted,” the fire department said. 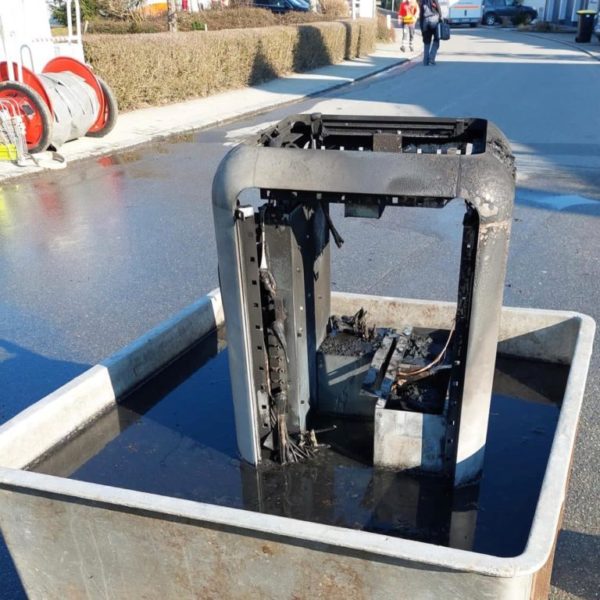 After extinguishing the fire, the fire brigade cooled down the battery in a vat of water.
Image credit: Feuerwehr Bodnegg

A technician from local utility EnBW switched the building off, a master electrician pulled the fuses and then the battery was dismantled. “The battery was carried out of the basement by five people wearing breathing apparatus and it ignited again in the open air. There it was extinguished and later placed in a vat of water to cool down. The house is currently no longer habitable,” the Bodnegg fire department continued.

“Since the issue of safety is our top priority, we have, nevertheless, decided to take this clear step,” the Leipzig-based company stated. “The cause of the events has not yet been conclusively determined. There are no indications that the battery was the cause of the explosion. Even external experts who were immediately involved do not assume that the storage devices led to the explosions,” Senec writes to its customers.

“We assume that we will maintain the standby mode for a few days,” the company went on to say. Remote shutdown is not possible for storage devices that are not connected to the internet. In this case, operators should contact their specialist partner or the Senec hotline, on +49 341 870 570.

Despite the remote shutdown, according to Senec, the photovoltaic inverter is still active and direct consumption and the feeding of solar power is therefore possible. “The only thing that does not happen in the stand-by mode is that battery power is not stored and drawn as it is galvanically isolated from the power flow,” the company said in its letter to customers. Senec promises specific information on restarting as soon as there is more clarity about the facts that led to the deflagration.

Senec was initially unable to obtain further information on the specific number of storage systems that had been shut down and the locations of other incidents. An inquiry from pv magazine has remained unanswered.

PreviousSolar PV-Electrolyzer with 9.1% Solar-to-Hydrogen Efficiency
Next Which Emerging Markets are Looking to Bolster Electric Vehicle Production?