In order to remain in line with its Sustainable Development Scenario for climate change, the IEA estimates that clean heating sources must reach 50% of global sales by 2030. For most buildings, heat pumps are the optimal solution. By moving heat rather than creating it, they are three to four times more energy efficient than the most efficient fossil tech, and their carbon intensity will fall with the rising penetration of renewables on the grid.

While the generator fleets of China and India remain coal-dependent, the levelized cost of utility solar has fallen below that of coal in both countries, justifying investment in electrification today for emissions reductions in coming decades.

Heat pumps are the fastest-growing heating technology today, with global sales increasing from 14 million units in 2014 to 20 million in 2019. They have reached 90% of sales in some Nordic countries, dispelling the myth that the technology cannot perform in cold climates. Much faster adoption is required, however, as this penetration represents only 5% of global sales – far short of a 50% target. 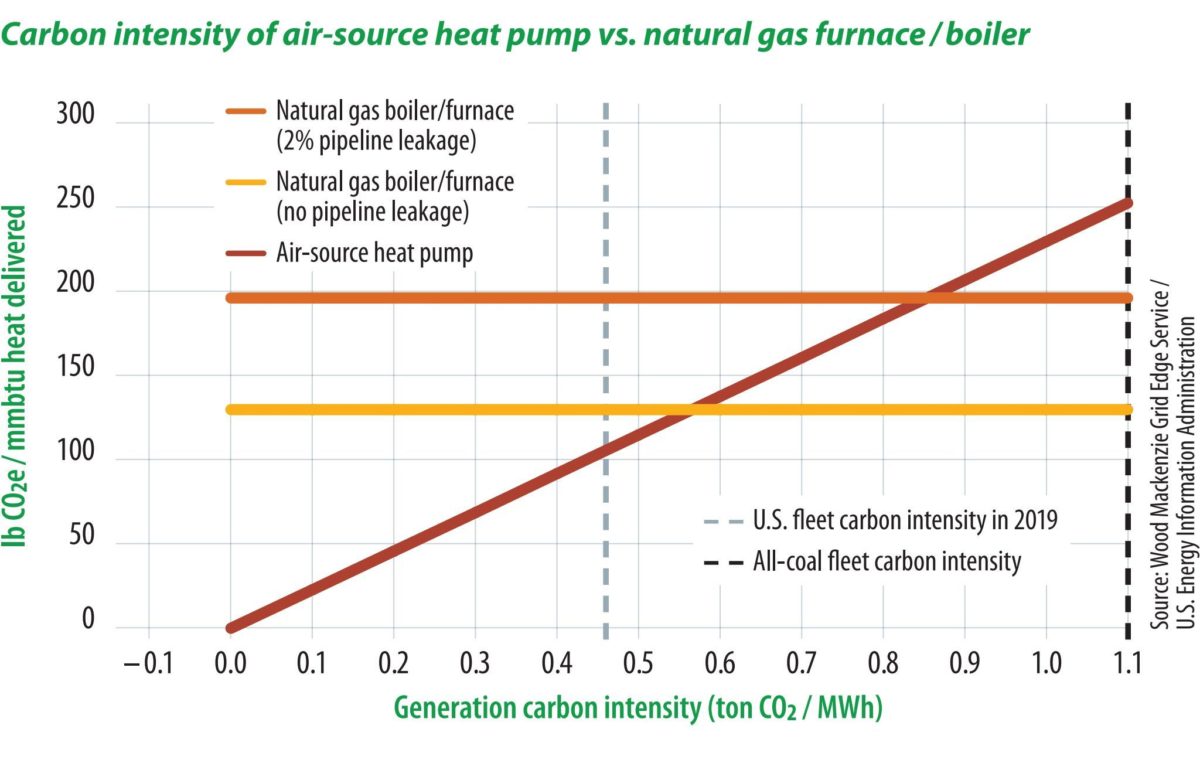 The main challenge that heat pumps face is their upfront cost. This is compounded in many regions by high electricity costs relative to those of fossil fuels. However, the 15-year net present cost of an air-source heat pump can be lower than that of a natural gas furnace on account of its energy efficiency, even in low-cost natural gas environments like the United States.

This is typically the case for new construction and when the heat pump is replacing both an air conditioner and a furnace. When only the furnace is replaced, incentives of around $6,000 are required to break even. Investment in customer education as much as in incentives is needed to translate these case-based economics into increased heat pump demand for retrofits and new construction.

A consequence of limited customer demand is a contractor industry lacking in heat pump awareness and expertise. A survey by the UK Heat Pump Association of fossil fuel heating system installers found that 43% had no experience with heat pumps, and a majority believed that both manufacturers and contractor organizations should be responsible for more widespread training.

Governments have stepped in to boost the heat pump market, through direct incentives and building code updates that promote energy efficiency, emissions reduction, or electrification. The EU’s Energy Performance of Buildings Directive (EPBD), for example, requires all buildings become “nearly zero-energy buildings,” a standard that each member state can define for itself. Under the landmark building code that California is likely to enact in December, new single- and multi-family homes, as well as schools, offices, and many businesses, are required to install heat pumps or meet their efficiency standards.

Unfortunately, U.S. municipal efforts to ban gas hookups have prompted a fierce political reaction, with at least 20 states adopting or considering legislation to preempt such building code enforcement. As a result, Wood Mackenzie forecasts that under current trends, 68% of U.S. states will fail to electrify half of all single-family homes by 2030. 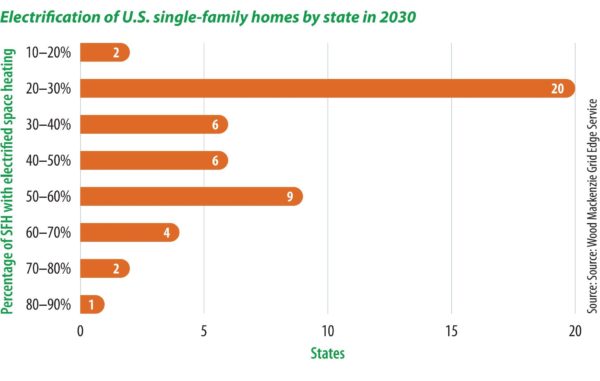 Banning natural gas is not necessarily the right solution for decarbonization. While electrification must be the primary solution, it can only take us so far. Heating demand is anti-correlated to solar irradiation, on both seasonal and daily timescales. Wood Mackenzie forecasts solar will represent 15% of global fleet capacity by 2040 under a base case, which could reach even higher penetration given the Biden administration’s 45% by 2050 target and the EU’s Fit for 55 package.

Moreover, an Oxford University study found that as of 2018, the United Kingdom and Germany’s heating demand were two and three times their electricity demand, respectively, further exacerbating the challenge. Together, these findings illustrate that even with massive long-term energy storage investment, the power sector cannot meet the world’s entire heating demand. Complementary fuels and technologies will be needed.

One option is to decarbonize gas networks, both by reducing methane leakage and by introducing renewable natural gas (RNG), which can be used in existing furnaces and boilers or hybrid heat pumps. RNG, or biomethane, results from purifying biogas, which is produced by anaerobic digestion or thermal gasification of food, agricultural, or landfill organic waste. Europe leads the world with 60% of RNG production today, followed by the United States with 20%. The tech remains heavily policy support-dependent, however, with costs in the U.S. ranging from $7-25/ metric million British thermal units (MMBtu), far above conventional gas, which trades closer to $2.50/MMBtu.

District heating is another complement to electrification, offering economies of scale for metropolitan areas. Popular in China, Russia, and Europe, district heating is largely fossil-fueled today, but offers multiple avenues for decarbonization. Networks of hot water or steam can deliver heat to an entire municipality from industrial-scale heat pumps, biogas furnaces, solar thermal, and combined heat and power facilities. Significantly, they can also deliver waste heat captured from industrial facilities, such as data centers and water treatment plants, which an EU study estimates could conservatively cover 25% of the continent’s district heating demand.

All input energy to data centers is converted to waste heat, notably, and a global array of operators – including Google, Amazon, IBM, and Intel – have signed on to a European Climate Neutral Data Centre Pact, which includes the reuse of waste heat. Other European waste heat initiatives include the ReUseHeat Project, funded by the EU’s Horizon 2020 Programme for Research and Development, which has four large-scale demonstration projects underway, including a data center and an underground metro system.

Ben is global head of grid edge at Wood Mackenzie, where he leads research in electrification, grid digitalization, decentralization, distributed energy resources, and demand flexibility. He is a nonresident senior fellow at the Atlantic Council Global Energy Center and serves on the external advisory committee of the Alfred P. Sloan Foundation’s Energy and Environment Program. He holds a Ph.D. in mathematics from UCLA.

PreviousClimate Change Will Strain Africa’s Already Congested Cities
Next What is COP26? Here’s How It Works Plus What’s Expected From the Glasgow Summit