You are at:Home»Headline News»Novel Solar PV Plant Design for Agrivoltaics

“The system has a cost that is 10% higher than conventional agrivoltaic project, but the improved crop yield ensured by the optimized lighting management would compensate for this slightly higher investment,” research co-author, Jan Ingenhoff, told pv magazine.

In terms of economic feasibility, a system developed with the proposed approach should be built at a cost of approximately €715 per kW installed and a yearly cost for maintenance of about €6.5 per kW.

Called Even-lighting Agrivoltaic System (EAS), the novel design methodology consists of utilizing metal brackets as mounting structures, conventional solar panels, and a grooved glass plate placed between the solar panels. The latter occupies an area that is one-third of the light-receiving area of the entire system. “With the installation of the glass plate, the density of PV panel arrays is the same as conventional photovoltaic power stations and very close to the optimum design for energy production,” the scientists affirmed.

According to Ingenhoff, any regular glass with a high transmission coefficient can be used, as there are no special requirements, and silicate glass and ultra-white glass may be perfectly suitable.

The metal brackets are placed on columns that are high enough to allow the growth of tall plants and the use of big agricultural machinery. The optimum tilt angle for modules was determined at 23 degrees, which the research group described as a good compromise between electricity generation and construction costs.

The scientists initially calculated and simulated optically the design of the grooved glass plate and then built a first pilot 35 kW agrivoltaic project in Fuyang city, in China’s Anhui province. Common vegetables such as lettuce, broccoli, garlic sprouts, garlic, rapeseed, Jerusalem artichoke, among others, were then planted.

A second pilot system was deployed more recently in Hefei city, in the same Chinese province. 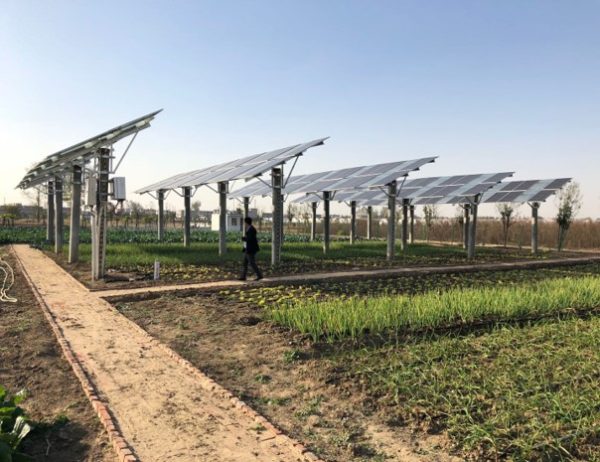 The EAS system provided improved growing conditions for some plants. For example, the Jerusalem artichoke harvest increased by over 20%. The reason behind this may be due to better soil moisture retained within the facility area, or that the plant can remain under photosynthesis between 11:00 and 2:00 pm in good sun radiation days, which is typically entering a dormant state for the plant outside, as leaf photosynthesis reaches a maximum in the late morning.

For both facilities, the height at which the solar panels were placed was 2.5 meters. Some of the plants also grew under the system equipped with supplementary LED lamps powered by the solar panels, which provided plants an extra 2 h light time every day compared to other treatments.

“The comprehensive economic benefits of EAS consist of the installation and maintenance costs, the electricity generation benefits and the crops harvest benefits,” the academics explained. “To accurately evaluate the comprehensive benefits of planting different crops, we considered the time required to plant different crops and the amount of electricity generated by the PV panels during the crop growth.”

According to their measurements, the use of the transparent grooved glass plate improved the irradiation collected by crops in one day by 47.38% compared to a conventional system, and the yield of Jerusalem artichoke, which needs at least six hours of sun a day, improved by 23%. 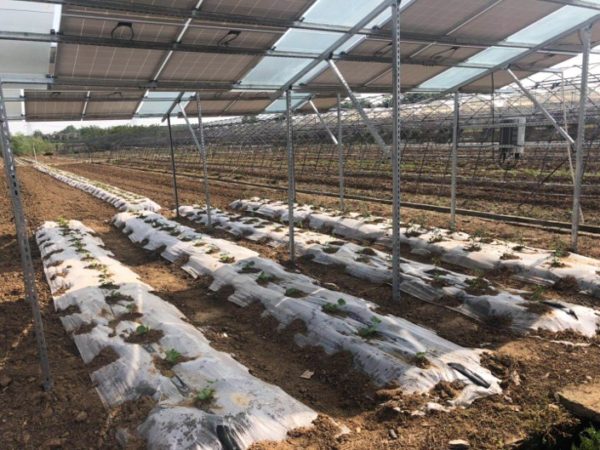 The demonstrator in Hefei City.
Image credit: University of Science and Technology of China

Including solar power generation, the system has shown that a farmer’s average income increases by 5.14 times and performed a high land equivalent ratio (LER), which is the measure the productivity and effectiveness of intercropping. It also improved the economic benefits on the farmland per hectare.

“Under the EAS, crops grew fast, and the yield was similar or better than that under the natural state,” the Chinese group noted. “By adding supplementary LED lamps into the EAS, the soluble sugar content of lettuce increased by 72.14% and the nitrate content of lettuce decreased by 21.51%.”

PreviousNeither the Security Council nor the AU is Grasping the Grand Ethiopian Renaissance Dam Nettle
Next Low-Cost, High-Value Opportunities to Reduce Embodied Carbon in Buildings