You are at:Home»Opinion»Nigeria’s Solar Workforce Can Help the World to Net Zero

Amid recurring talk of a global shortage of the trained renewable energy workers of the future, could it be that one corner of the globe is being overlooked by analysts?

“There’s a war over talent globally,” said Miguel Stilwell, the CEO of Madrid-based, Portuguese-owned clean energy business EDP Renewables recently. “The renewables sector, given the massive amount of growth that is expected, doesn’t have enough people.”

The fact companies are retraining staff from the oil and gas industries is no bad thing, given the widely-acknowledged need for a ‘just transition‘ to new forms of power generation, but renewables businesses the world over should not ignore the solar workforce which has been steadily building in Nigeria for the past 16 years.

pv magazine’s  UP Initiative spent the second quarter looking at what solar and energy storage companies can do to lead by positive example when it comes to the workers, often far removed, who are involved in the production of their products and services. Supply chain traceability and polysilicon provenance were key topics.

A power reform act passed in 2005 led to Nigeria’s Renewable Energy Master Plan, or REMP, which has provided the bedrock of renewable energy policy in the nation.

Since that landmark legislation was passed, the Nigerian solar industry has developed to the stage the cities of Lagos and Abuja alone boast more than 40 PV companies.

The REMP was revisited in 2013 and 2015 and recast as the National Renewable and Energy Efficiency Policy, or NREEP, and has seen the market develop further, with off-grid and mini-grid solar arrays ranging in scale from 5 kW rooftop systems to 1 MW solar farms, forming the backbone of today’s PV industry.

Far from calling on overseas personnel, however, these small scale systems – increasingly vital given the fragile nature of the conventional grid network – are being designed and implemented by Nigerian solar engineers. With a World Bank report published last year having estimated Nigeria’s total workforce runs to more than 62.4 million people, it is tempting to wonder how many of them are equipped with solar skills and whether such PV industry recruits could help with the much-discussed personnel shortages around the world.

I conducted a quick survey of 22 Nigerian solar engineers, including some with 4-15 years’ experience in the industry, and the respondents estimated the PV industry might stretch to 5-15% of the nation’s total workforce. Fifteen-year veteran Olubukola Ayeni, who has affiliations with the U.S.-based Solar Energy International and Germany’s Renewables Academy, said up to 5% of Nigeria’s labor force might consist of PV installers, with solar engineers making up 2% of the total, and renewables consultants and PV design engineers another 1% each, although he suggested there would be some overlap between roles.

Of the sample of solar engineers polled, around 40% had worked on projects with a generation capacity of more than 100 kW, with experience ranging from 5 kW arrays to 1 MW systems.

Around half of those I questioned were familiar with at least one of the PV design software packages PVsyst, PVCAD, HOMER, PowerHub, AutoCAD and HelioScope. The engineers familiar with such software were affiliated with at least one of the wholesale suppliers Africa Energy; the Simba Service business which is part of Nigerian conglomerate Simba Group; USAID’s renewables and energy efficiency initiatives; the International Association of Engineers; French energy multinational Schneider Electric; German development agency GIZ; Senegalese start-up Oolu Solar; and Dutch off-grid PV business Victron Energy.

With 10 of those polled stating they were confident of their ability to lead a team on the construction of a 10 MW solar project, the respondents said the skills they felt they lacked concerned experience on larger facilities, solar design software training, and project funding.

The biggest challenges facing the Nigerian solar industry, according to the interviewees, were the high cost and low standard of materials, hard-to-access funding, lack of domestic PV manufacturing, and an inadequate policy framework. Despite operating in a vacuum characterized by little external support and slow domestic backing, the engineers I spoke to said the Nigerian solar workforce lacked experience in just two areas to be globally competitive: the execution of large projects, of around 100 MW of generation capacity; and solar design software training.

Progress is being achieved, however, with the state government of Lagos recently flagging collaboration with the International Institute of Technology and Application, based in Georgia, in the U.S., to help people gain global solar technology certification, with the North American Board of Certified Energy Practitioners as a partner.

To reach our net zero goal by mid century, we need to get boots on the ground working to install solar as quickly as possible. There is already a small percentage of Nigerian solar engineers who could work worldwide and, as for the rest, it is not about transitioning to global solar jobs; our workers already have the skills, they simply need to be integrated into the global solar workforce, rather than operating in isolation.

With the U.S. Department of Energy having noted the solar workforce is predominantly white and male, helping Nigerian engineers enter the global stage would help and would see Nigerians make a contribution in the manner in which we are already doing in the fields of information technology, medicine, sports and music.

And our engineers will bring that precious commodity of a different perspective. After all, in progressive fields such as software and renewables, doing what no one else has done before is part of the job description and what is standard today may be obsolete tomorrow, hence the need for industry personnel to constantly evolve.

Gabe-Oji is chief technology officer for Abuja-based renewables engineering, procurement and construction services company Green Energy Spectrum. A renewable energy physicist, Gabe-Oji has co-authored an international journal on bio-filters published on ResearchGate and in other publications.

Disclaimer: The articles and videos expressed in this publication are those of the authors. They do not purport to reflect the opinions or views of Green Building Africa or pv magazine, our staff or our advertisers. The designations employed in this publication and the presentation of material therein do not imply the expression of any opinion whatsoever on the part Green Building Africa concerning the legal status of any country, area or territory or of its authorities. 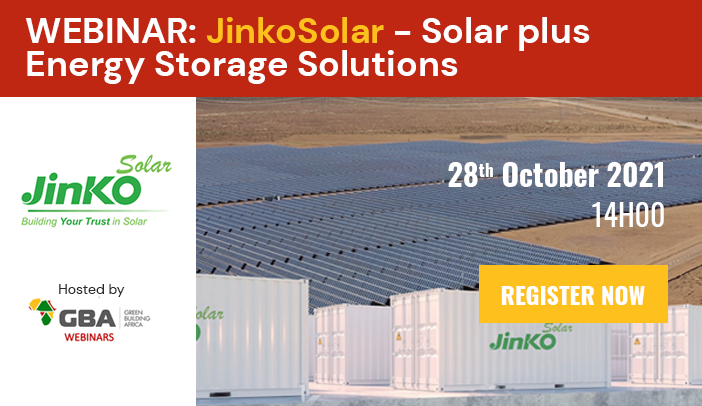 PreviousSouth Africa: Gas Should not be Factored into our Climate Commitments – it is not a Sustainable Carbon Source
Next New GREEN Solar Academy Opens in Ballito, Kwazulu Natal