Scientists at Purdue University in the state of Indiana in the United States say they’ve created a new paint that’s so ultra-white, it could do away with the need for aircon – while helping to fight climate change.

“If you were to use this paint to cover a roof area of about 1,000 square feet, we estimate that you could get a cooling power of 10 kilowatts,” said Xiulin Ruan, a Purdue professor of mechanical engineering. “That’s more powerful than the central air conditioners used by most houses.”

Typical commercial white paint gets warmer rather than cooler. Purdue says its product repels infrared heat from a surface and reflects up to 98.1% of sunlight. This outperforms 80%-90% of comparable products and beats the 95.5% of sunlight reflected by the researchers’ previous ultra-white paint.

So what makes this paint so reflective? It’s mainly down to a chemical compound called barium sulfate which is also used to make photographic paper white. Different sized particles within the paint help to make it more reflective.

In an outdoor demonstration, the team showed the paint was able to keep surfaces 19° Fahrenheit (10.5C) cooler than the ambient surroundings at night. It can also cool surfaces by 8° Fahrenheit (4.4C) under strong sunlight during noon hours.

Painting walls and roofs white to deflect heat has been done for centuries. Since the 1970s, there have been attempts to develop radiative cooling paint as a workable alternative to traditional air conditioners. This new paint is the result of six years of research.

With global temperatures rising, more and more people are relying on cooling to stay safe and comfortable. The International Energy Agency projects that energy demand from air conditioners will triple by 2050 – equivalent to adding 10 new air conditioners every second for the next 30 years.

The power needed to keep air conditioners and electric fans running accounts for 20% of global electricity use, according to the IEA’s Future of Cooling report.

In Los Angeles, California, some streets and pavements have been painted with a white coating called CoolSeal to help reduce temperatures in the city. This resulted in the streets being 10 to 15 degrees Fahrenheit (5.5C – 8.3C) cooler on average than others, according to the city’s Bureau of Street Services. 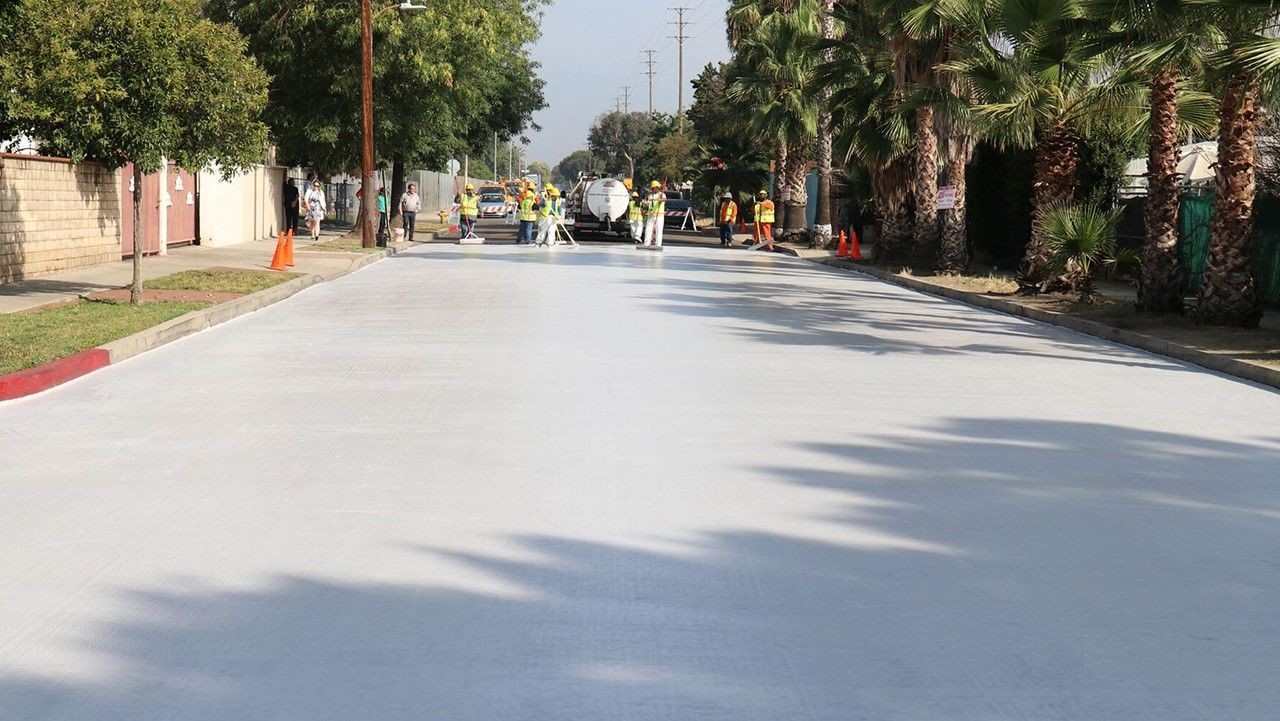 Painting streets and pavements white has been shown to reduce temperatures in nearby areas. Image: Bureau of Street Services

Rising temperatures in California’s Death Valley have broken new records recently. In 2020 weather experts recorded the highest ever reported temperature when the mercury climbed to 130 degrees Fahrenheit or 54 Celsius