You are at:Home»Headline News»New Report Suggests the Speed of the Energy Transition Is Rapid

That the world is engaged in a profound transition in the way we use energy is undeniable. The era of carbon-intensive energy derived from the burning of fossil fuels is coming to an end, and a cleaner, more reliable energy future based on renewables like wind and solar will be the new normal. How long this change will take is, however, still a matter of fierce debate. But a new report from the World Economic Forum’s Global Future Council on Energy, The Speed of the Energy Transition offers compelling evidence that stakeholders in the global energy system—which means all of us—must prepare for change urgently, because it is coming fast.

The report, principally authored by Kingsmill Bond of Carbon Tracker, Angus McCrone of Bloomberg NEF, and myself, examines a key question: will the energy transition be gradual or rapid? A gradual transition means that oil, gas, and coal remain the dominant energy sources even as renewable energy supply increases at a steady but linear rate. And it means that there is growth in energy demand for fossil fuels—with demand for fossil fuels not reaching its peak for a generation or more—allowing the traditional businesses of energy sector incumbents to continue to flourish. In this transition scenario, we miss the climate change goals of the Paris Agreement, but the global energy sector doesn’t face the near-term prospect of wrenching change.

A rapid transition, on the other hand, means that renewables like wind and solar quickly start to supplant fossil fuels as their supply increases at an exponential rate, following the familiar S-curve growth pattern of new technologies like personal computers and mobile phones. It means that renewables supply all the net growth in global electricity demand, displacing oil, gas, and coal —with demand for fossil fuels peaking in the 2020s —and thus seriously disrupting the traditional businesses of the energy sector incumbents. In the rapid transition scenario, the energy sector will face massive change, but humanity has a chance of achieving the goals of the Paris Agreement to limit climate change to well below 2 degrees.

The question of the timing of the energy transition is a critical one: either the tipping point is right before our eyes in the decade to come, or it is far into the future, beyond the planning horizon of most companies. If stakeholders, whether they are governments setting policy, or businesses making investment decisions, assume a gradual transition while the trajectory is actually a rapid one, they will end up making the wrong decisions. Society will bear the costs of uneconomic investments and stranded high-carbon assets. But equally important, humanity will miss an early opportunity to achieve a sustainable world where the risk of catastrophic climate change is limited. 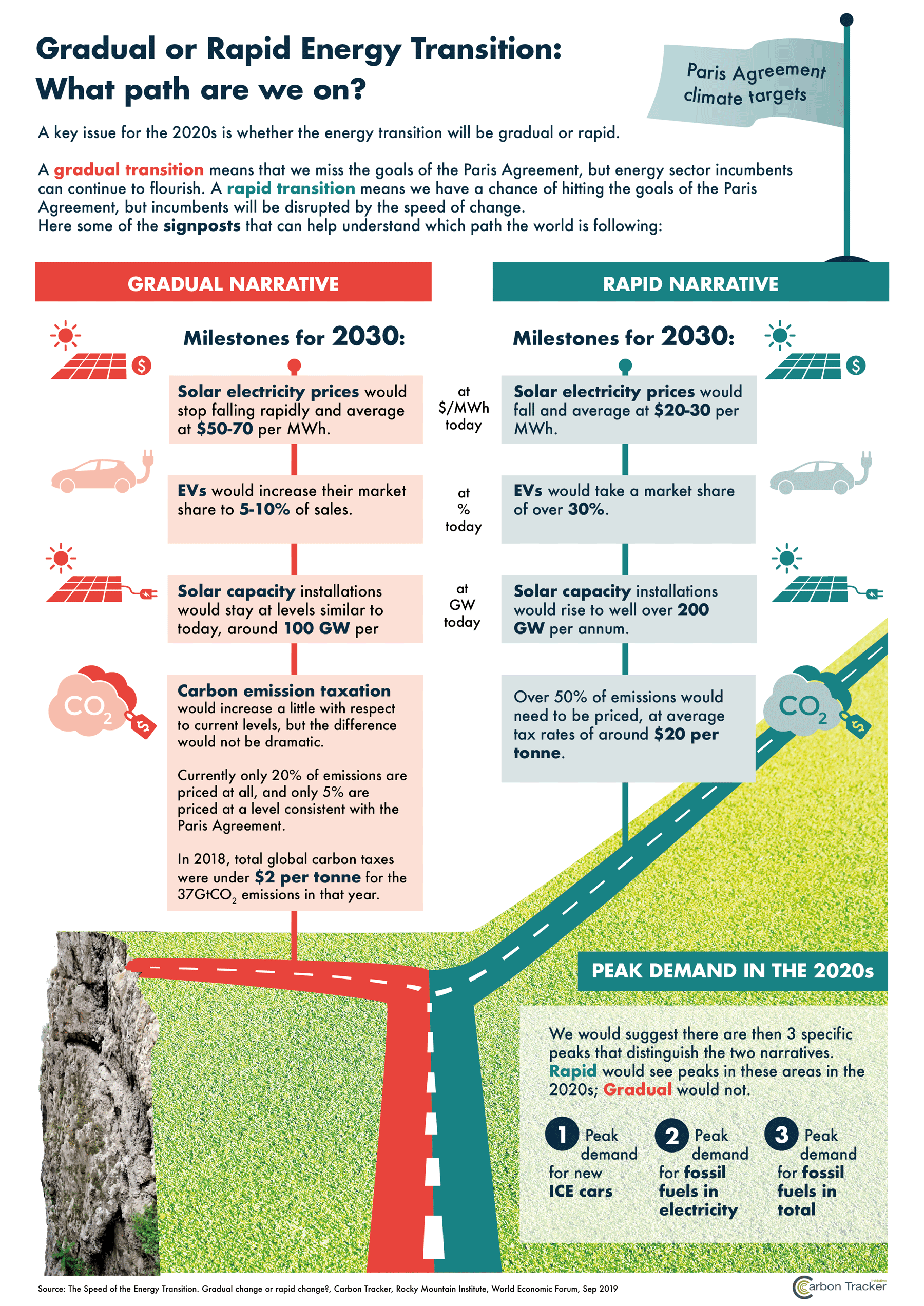 The new report describes how the two narratives—gradual and rapid—are distinguished by four main features, and how views on these issues largely determine conclusions on where the energy markets are heading. How one reads the evidence on either side of these questions determines whether one believes the gradual or rapid energy scenario more likely. They are:

At what point do renewables get big enough to impact the incumbency?

It is possible to judge the coming transition by the percentage of total energy supplied by renewable or fossil fuels, and doing so makes the changes seem gradual; solar and wind are said to be only about 1 percent of total energy supply and so too small to have much of an impact. But the key moment of significance in the transition is when renewables make up all the growth in energy supply, and this will likely come in the 2020s, long before fossil fuels lose their dominant share of total energy supply. The effects of the change will be felt by incumbents as market growth turns to decline, and financial markets constrain capital to declining industries, reallocating it to those that are growing.

Is growth in new energy technologies linear or exponential?

Until just a few years ago, solar and wind power were more expensive than fossil-fueled electricity in most places, but cost parity has now arrived. Some argue that renewable costs will stop falling. But the evidence suggests that prices for renewables will drop far below incumbent energy sources, and fast. Consider: solar and wind are already cheaper than fossil fuels for the generation of electricity, and electric vehicles are close to challenging internal combustion engine cars on price. The barriers to growth are soluble for the foreseeable future, and even further waves of change are likely to arrive due to nascent but viable technologies such as green hydrogen.

Inertia is a powerful force and existing policies have only gone so far, but history teaches us that change, once it comes, is adopted rapidly everywhere, as with the adoption of laws prohibiting smoking indoors. We live in an era of increasing pressure to change policy related to carbon-intensive fossil fuels. In the face of catastrophic global warming, continuously accelerating innovation, and the huge energy windfall opened up by low renewable costs, change is inevitable. As technology opens up the opportunity to provide better solutions for consumers’ energy needs, policy makers will respond by redesigning markets. Once politicians see that the transition is not expensive and improves competitiveness, they will rapidly change the rules that govern energy markets so as to accelerate the transition.

Will emerging markets follow the fossil fuel path taken by developed markets or will they leapfrog to new energy technologies?

Some in the energy sector are convinced that emerging markets will broadly follow the path taken by developed markets and use more fossil fuels as they get richer and energy demand rises. Nations like China and India do indeed require more energy for their citizens. Close to one billion people around the world still do not have access to electricity. But providing consistent access to sufficient energy does not mean that developing countries have to choose a polluting energy system based on fossil fuels, particularly when the developed world is rapidly shifting to lower-cost, cleaner solutions. Just as mobile phones leapfrogged land-line telephony in much of the developing world, developing and emerging countries can leapfrog to the new energy technologies of the future.

From the perspective of RMI, the evidence clearly points to a rapid energy transition scenario. The key is to feel the winds of change early and move into position so that it can fill all sails. Electric vehicles had a global market share of just 2 percent in 2018, but the global auto sector has committed $300 billion to a strategic transformation that seeks to ensure that auto industry incumbents from Detroit to Stuttgart will continue their centurylong dominance far into the future. As we published in a report earlier this week, clean energy portfolios now make natural gas-powered generation unprofitable across the United States. Developing countries will opt for the more cost-effective new technologies, rather than adopting solutions from the past. And increasing policy pressure, together with financial markets that reallocate capital, will all drive in the same direction. We can all of us—innovative technology start-ups, global energy incumbents and government policymakers alike—travel together and deliver the benefits of the energy transition profitably. But first recognizing what road we are traveling will make all the difference.