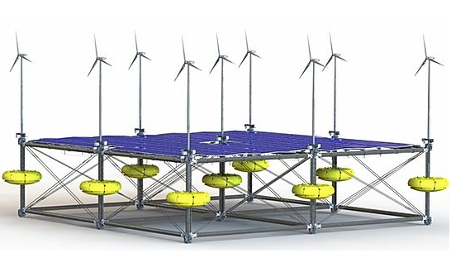 “The modular design has been a key element since we started developing maritime technologies that allow flexibility and a wide variety of applications” Dr Philipp Sinn, CEO Sinn Power told Forbes. “The floating platform can supply renewable energy to islands across the world, for example, and contribute to the worldwide implementation of offshore wind farms.”

Each floating unit, or module, consists of four integrated wave energy converters generating power relative to the water conditions. For regions with low potential for wave energy, the unit can also be equipped with an array of 20kW photovoltaic cells. Similarly, up to four small 6 kWp wind turbines can be equipped and finally a combination of all three is also possible, making optimum use of the environmental conditions surround the platform. Sinn says there’s no limit to how many units a potential could have.

“It’s always the same, it’s super modular. We can always use the same parts, the same electronics regardless of which configuration is constructed. So, with this strategy, we want to get into volume, get the practice low, and then it’s so we can show [sic]that wave power is really attractive against solar,” Sinn said.

The key, says Sinn, is making this technology affordable.