The proposed splitting of Eskom into generation, transmission, and distribution, has been received with mixed reactions. In response to President Cyril Ramaphosa’s announcement declared during the State of the Nation Address – the National Union of Mineworkers (NUM) says it totally rejects the proposed business model.

The unbundling of Eskom will result in massive job losses and retrenchments in provinces like Mpumalanga, according to NUM. In a media statement, the union stated that its “members and other workers at Eskom are totally opposed to the privatisation of the power utility to enrich the few elites”.

The union is of the view that the proposed model will result in electricity being expensive and it will be unaffordable to the poor.

“The NUM is going to fight tooth and nail against the unbundling of Eskom. If the government wants to save costs at Eskom, they must cancel the 27 IPP agreements signed by the Minister of Energy Jeff Radebe that are costing Eskom about R93 million a day,” the union said.

The NUM stated that it is not against renewable energy however, it suggests that IPPs must stand alone and compete with Eskom. “The NUM has long advised the government that the only turnaround strategy of Eskom is to stop the Independent Power Producers (IPPs) who are looting the resources of Eskom,” it added.

Frost & Sullivan highlights that by retaining ownership of the transmission infrastructure, with the existing structure, Eskom is potentially losing out on efficiencies that can be attained from free market generation economics, as well as cost and energy efficiencies that private players would bring in.

“This is a serious barrier to entry for any private generation solutions that could possibly feed into the grid. With all the different sources of power which are coming into play such as wind and solar and the cost of alternate energy generation reduced below that of coal, buying from private players such as the IPPs within the Renewable Energy Independent Power Producer Procurement Programme (REIPPP) could potentially result in a shutdown of some of Eskom’s existing plants. This is as a result of Eskom not gearing up to the change that is happening in the electricity industry,” adds Mense.

Digitalisation, customers as suppliers, microgrids, and demand side management are some of the aspects that one can expected Eskom to successfully attain once the privatisation and unbundling take effect. 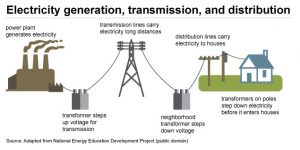