The African Energy Chamber has welcomed the recent gas condensate discovery by Total in Block 11B/12B, 175km off the southern coast of South Africa. This is a great first step for the country, which still relies on imports of oil and gas despite the great reserves believed to be in its soil and waters.

The discovery, which will help open a new hydrocarbons province in South Africa, could prove the presence of billions of barrels of oil equivalent in South African waters, which will undoubtedly change the course of the country’s economy and help reduce dependency on imports.

“The oil industry hopes this will be a catalyst and encouragement for all policy makers to work on an enabling business environment for exploration and drilling activities in South Africa,” declared NJ Ayuk, executive chairman at the Chamber.

“We believe South Africa holds the potential for many more such discoveries, and the time has come to have a meaningful conversation on local content development so the development of the industry benefits all South African workers and contractors across the value-chain and creates jobs for the communities.”

The gas discovery is a timely one as the South African government is currently working on a new legislation separating oil and gas from traditional minerals, and has released last year a new Integrated Resource Plan (IRP 2018) with ambitions to install an additional 8,100MW of gas-to-power capacity in South Africa by 2030.

It further echoes increased engagement of the South African government with the African and global oil industry.

Since being appointed Energy Minister in 2018, Jeff Radebe has been leading a strong South African outreach to oil markets in Africa like Nigeria, Equatorial Guinea, Angola, South Sudan, many middle eastern producers and attending meetings of the Organisation of Petroleum Exporting Countries (OPEC) in Vienna and seeking deals for state-owned South African companies such as the Central Energy Fund and PetroSA.

“Oil companies want to see leadership and sound governance wherever they invest,” added NJ Ayuk. “With South Africa demonstrating a commitment to reforms and the creation of an enabling environment for business, the oil industry is confident that the country can attract the investment needed,” Ayuk concluded.

This will be a hot topic at the The Africa Gas Forum which takes place as a side line event at the Africa Energy Indaba on 19 – 20 February 2019 at the Sandton Convention Center, Johannesburg, South Africa. 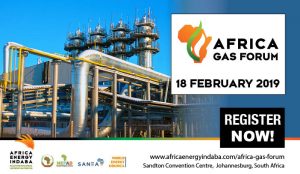