You are at:Home»Headline News»Mauritius is Reeling from a Spreading Oil Spill – and People are Angry with how the Government has Handled it

Fuel oil began to leak into the expansive turquoise blue lagoon outside the coastal village of Mahébourg. Striking satellite images show the resulting oil spill weaving a black slick between the mainland at Pointe D’Esny and the flat round island of Ile-aux-Aigrettes. The impacts seen closer up are gruesome. On August 7, nearly two weeks after the shipwreck, the government declared the incident a national emergency. 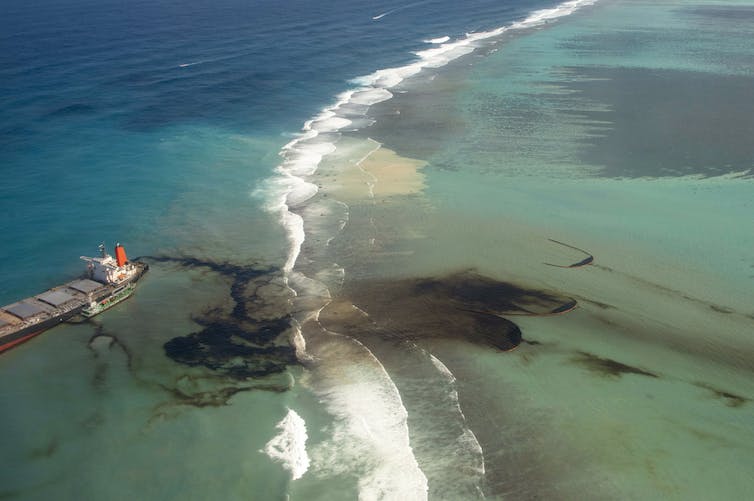 With at least 1,000 tons of fuel oil estimated to have already emptied into the lagoon, two ships moved alongside to transfer off remaining fuel in a race against time as the vessel threatened to shear into two.

I’m a Mauritian living in the UK and visit my dad’s house in Mahébourg once or twice a year. The coastline affected is the waterfront at the end of our street and the beaches where we swim and picnic. It feels scary and strange to be writing this from 10,000km away but inspiring to see local people taking action and coming together.

Spills like this harm marine life because the chemicals that make up oil are toxic to plants and animals, including mangrove forests and the corals that build reefs. While the black and sticky heavy oils used to fuel ships are less toxic than light oils like diesel or petroleum, they persist longer and smother life in the sea and on the coasts. Ecological effects ripple across interconnected marine and land ecosystems.

It’s very difficult to predict how severe the impacts will be in Mauritius – and how quickly or well the environment might recover – from even detailed analyses of case studies and ecology of mangroves and coral reefs. There are just too many variables, including the complexity of the ecosystems, what mix of oil has been spilled, and how clean up is attempted, which can have negative environmental impacts too.

The 22 hectares of mangrove that make up the Pointe D’Esny Wetlands (roughly the area of 22 soccer pitches) are designated as a Ramsar site, a protected area for internationally important wetlands. The mangroves are home to species and habitats of conservation importance and to nurseries of fish supporting coastal fisheries.

Just along the coastal road to the south is Blue Bay Marine Park, another Ramsar site, with 353 hectares of coral reefs, seagrass meadows, and more mangroves. It is home to turtles, 72 species of fish, and an exceptional coral diversity of 38 species from 15 families.

Ile-aux-Aigrettes, opposite Pointe D’Esny, has the last remaining coastal ebony forest in Mauritius and is an island I spent three months living on as a volunteer in my youth. The coastal ebony species is one of 11 remaining endemic ebony species of Mauritius, a twelfth is believed extinct. This 27-hectare island nature reserve is named for the egrets, various long-legged and typically white-feathered species of the heron family that fish these coasts.

Successful conservation efforts have restored numbers of the Pink Pigeon, one of the rarest birds in the world in 1990, on Ile-aux-Aigrettes. It was brought to the island by the Mauritian Wildlife Foundation, the conservation charity that has painstakingly restored its ecosystems. Conservationists have been helped by the reintroduction of free-roaming giant tortoises who act as ecological engineers in the restoration of the various coastal islands.

Local fishermen depend on the now oil-polluted lagoon for their livelihoods and local people depend on it for most of the fish they eat. Many local small businesses, often family run, such as guest houses, tour guides, eateries and tourist shops are geared towards holidaymakers attracted by the beautiful sea, beaches and nature that Mauritians enjoy every day.

And it seems the oil spill could eventually devastate most of the east coast of Mauritius. This includes stretches further north that host a large share of luxury coastal hotels. The coronavirus has closed international tourism since March. It would have been a slow recovery even without the environmental degradation.

The MV Wakashio is wrecked on almost the same spot where a British steel-hulled sailing vessel, the Dalblair, sank carrying coals to Mauritius in 1902. The jagged remains of its decaying hull protrude to this day as a landmark above the waves, which ironically in daylight would have been a sobering warning.

After the oil spill, the usual sights of families strolling by the sea were quickly replaced by volunteers working hard in a grassroots effort to protect their coast. Packing straw from the fields of tall swaying sugar cane into homemade floating booms, self-organised groups of local people and activists deployed these along kilometres of coast with visibly evident success, halting expansion of the slick and soaking up oil.

The Mauritian government has told volunteers to stop and leave any efforts to officials. But people and local organisations are carrying on their making and deploying booms, which is the only apparent action dealing with the oil floating on the sea. It seems better to risk a fine or arrest than to stop. And local sentiment seems to be unanimously negative about the government’s slow response and lack of action targeting the slick.

Why the mistrust? Just four years ago on June 17 2016 another bulk carrier, the MV Benita, ran aground in Grand Port just 7km along the coast to the south. I was in Mauritius when this happened and looked out at the MV Benita (which had a fifth the cargo capacity of MV Wakashio) from the beach at Blue Bay.

There had reportedly been a fight on board and the ship had lost power, before drifting to Mauritius – without coming to the attention of the national coastguard. How the ship could simply crash into Mauritius without the authorities knowing bewildered people locally.

The vessel was there for five weeks before it was finally refloated, thankfully the oil having been taken off without major spillage or tank rupture. It was being towed to be scrapped in India when it then sank 90km offshore from Mauritius.

Satellite evidence suggests in July 2020 the MV Wakashio had been on a clear direct collision course with Mauritius for several days and hit the reefs at Pointe D’Esny with ocean cruising speed maintained, meaning the government was again likely taken by surprise. The same evidence suggests it took six days for the government to even send out a tug to try to refloat the ship.

The recent Beirut tragedy – a deadly explosion of ammonium nitrate in long-term port storage – and now this Mauritius incident raise questions about governance and security in international shipping. Ships can be registered (flagged) in any country of choice, meaning owners are able to find jurisdictions with least regulations. As a Forbes article suggested: “It is unclear how effective the regulators of the flagged nations were in ensuring the safety of the vessel, port, crew and locations through which the vessel travelled.”
This will need to be investigated.

Mauritius is perhaps best known for the flightless bird, the dodo, that has become emblematic of the island and of extinction. The tragic case of the dodo became a lesson for the environmentally conscious who developed the modern conservation movement. If the grounding of MV Wakashio and its destruction of environment and livelihoods can become a lesson for the global leaders who can bring about change, maybe we can at last have international shipping fit for the modern world.