JinkoSolar is one of the largest and most innovative solar panel manufacturers in the world. They are ranked as a top solar brand in debt financed projects and named a most “bankable” PV manufacturer by Bloomberg New Energy Finance (BNEF).  Projects using JinkoSolar modules have secured more long term-loan financing than any other Chinese PV brand ever. 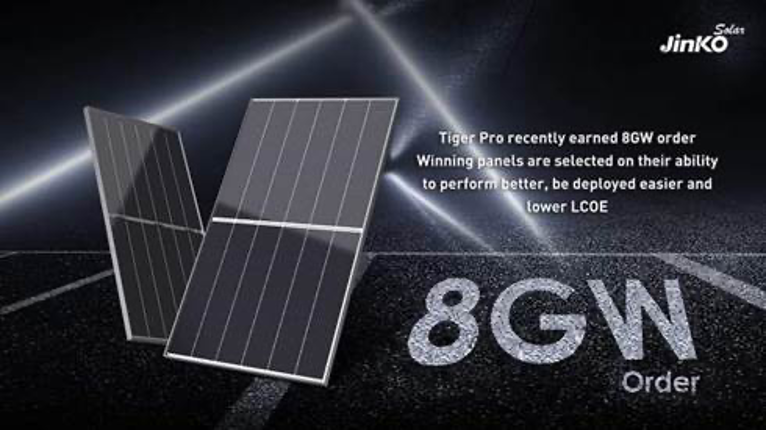 The first batch of Tiger Pro series modules has officially been shipped from JinkoSolar factory in Yiwu. An order for over 8GW of Tiger Pro has been signed as of January 2021, receiving the positive feedback of customers from all over the world. Tiger Pro series adopts the optimal wafer size of 182mm to match the market demand with a high power output of up to 585Wp and high efficiency of up to more than 21%.In addition, Tiger Pro high compatibility and adaptability can effectively reduce the LCOE, and this makes Tiger Pro size become the standard of the new generation in PV industry.

On January 1st, 2021, JinkoSolar set a new world record of 24.9% for high-efficiency n-type mono-crystalline silicon (c-Si) TOPCon solar cell. This result was independently confirmed by the the Institute for Solar Energy Research in Hamelin (ISFH) in Germany.

The company is eyeing the 26% cell efficiency and 700 W panel output by 2021 and rolling out mass production on this process in 2022.

JinkoSolar broke ground for its massive new cell facility in Chuxiong, Yunnan on October 08, 2020, siting on about 67 hectares of land – roughly the size of 100 soccer fields. The Chuxiong cell facility will be the largest single cell production base in the world with 20 GW cell capacity.

To put the number in perspective, the total amount of cell capacity (all-time) for Haining (6.6GW), Penang(4.4GW) base added up to only about 11 GW as of December 2020. If Jinkosolar hits its 20GW projection, the cell capacity of the company will climb to over 30GW.

The Chuxiong factory will be powered by 100% renewables including rooftop solar and local hydro power, to become the world’s first cell manufacturing facility to achieve the ambitious goal of carbon neutrality.

PreviousWorried About Earth’s Future? Well, the Outlook is Worse Than Even Scientists Can Grasp
Next Engie and Total Plan 100MW Solar/40 MW Hydrogen Electrolyser for Biofuel Production