You are at:Home»Headline News»Impact Oil & Gas plus Shell Blasted for Seismic Oil and Gas Survey Off South Africa’s Coast

The South African Government recently granted the Second Renewal Period of the licence. This is a two-year exploration period that commenced in August 2021. Impact and Shell intend to proceed with the acquisition of approximately 6,000 km2 of 3D seismic during 2022. 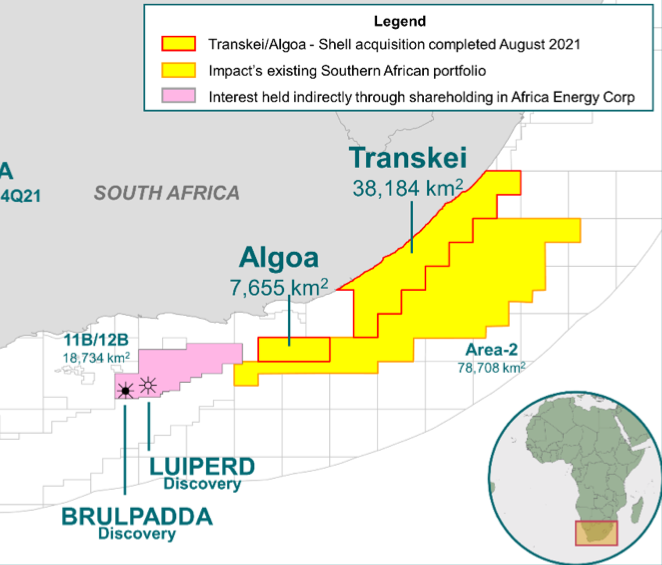 Oceans Not Oil Coalition claims that the ship will work around the clock, firing the air guns every 10 seconds. In the process, marine life on the sensitive Wild Coast will be panicked and damaged.

“Many sea creatures could be affected in the coming months — whales, dolphins, seals, penguins, sharks and even crabs and tiny shellfish will be blasted. At a time when world leaders are making promises and decisions to step away from fossil fuels because climate science has shown we cannot burn our existing reserves (let alone drill for more), offshore oil and gas Operation Phakisa is pushing ever harder to get its hands on a local supply of gas. Shell must answer for how the harms done during this survey and any exploration drilling done hereafter are part of its energy transition plan to control global warming.”

Operation Phakisa is an initiative of the South African government.  The initiative is designed to fast track the implementation of solutions on critical development issues to address issues highlighted in the National Development Plan (NDP) 2030 such as poverty, unemployment and inequality.

South Africa’s Ministry of Mineral Resources and Energy has hit back saying that the development of an upstream oil and gas industry was a necessary part of South Africa’s economic recovery strategy.

“As part of the application for an exploration right, applicants were required to develop an environmental management programme in terms of the Mineral and Petroleum Resources Development Act, 2002, which in this instance was approved in 2013 by the DMRE,” the department said.

“The exploration right was subsequently granted by the DMRE in April 2014, allowing the holder to, among other activities, acquire three-dimensional seismic data during the survey window period, which was usually from December to May, to avoid migratory marine mammals.” The department added that an independent audit was undertaken in 2020 to confirm that the controls and mitigation measures were still valid.

“The outcomes of the audit were that the measures contained in the environmental management programme sufficiently provide for the avoidance and mitigation of potential environmental impacts,” the DMRE said.

The Amazon Warrior docked in Cape Town harbour earlier this week amid offshore and onshore protests from environmental activists chanting ‘to hell with Shell!’.