You are at:Home»Opinion»How the Grand Renaissance Dam Might Spark Basin-Wide Water Cooperation

Ethiopia’s on-going construction of the Grand Ethiopian Renaissance Dam on the Blue Nile River has attracted speculation that it could lead to a ‘water war’.

There is no doubt that the dam has become a source of serious tension among Egypt, Ethiopia and Sudan. But in my view a war is very unlikely. In fact, the dam has helped to shift longstanding power relationships and could pave the way for more cooperation among all the countries that depend on the Nile.

Although some claim the Amazon River is longer, the Nile has historically been known as the world’s longest international river. It passes through 11 countries. The current distribution of its waters is limited to only two – Egypt and Sudan – under the 1959 Nile Agreement. Out of the total annual flow of the Nile, measured at Egypt’s Aswan Dam as 84 billion cubic metres, Egypt takes 66% of the water and Sudan 22%, and the remaining 12% goes to evaporation. 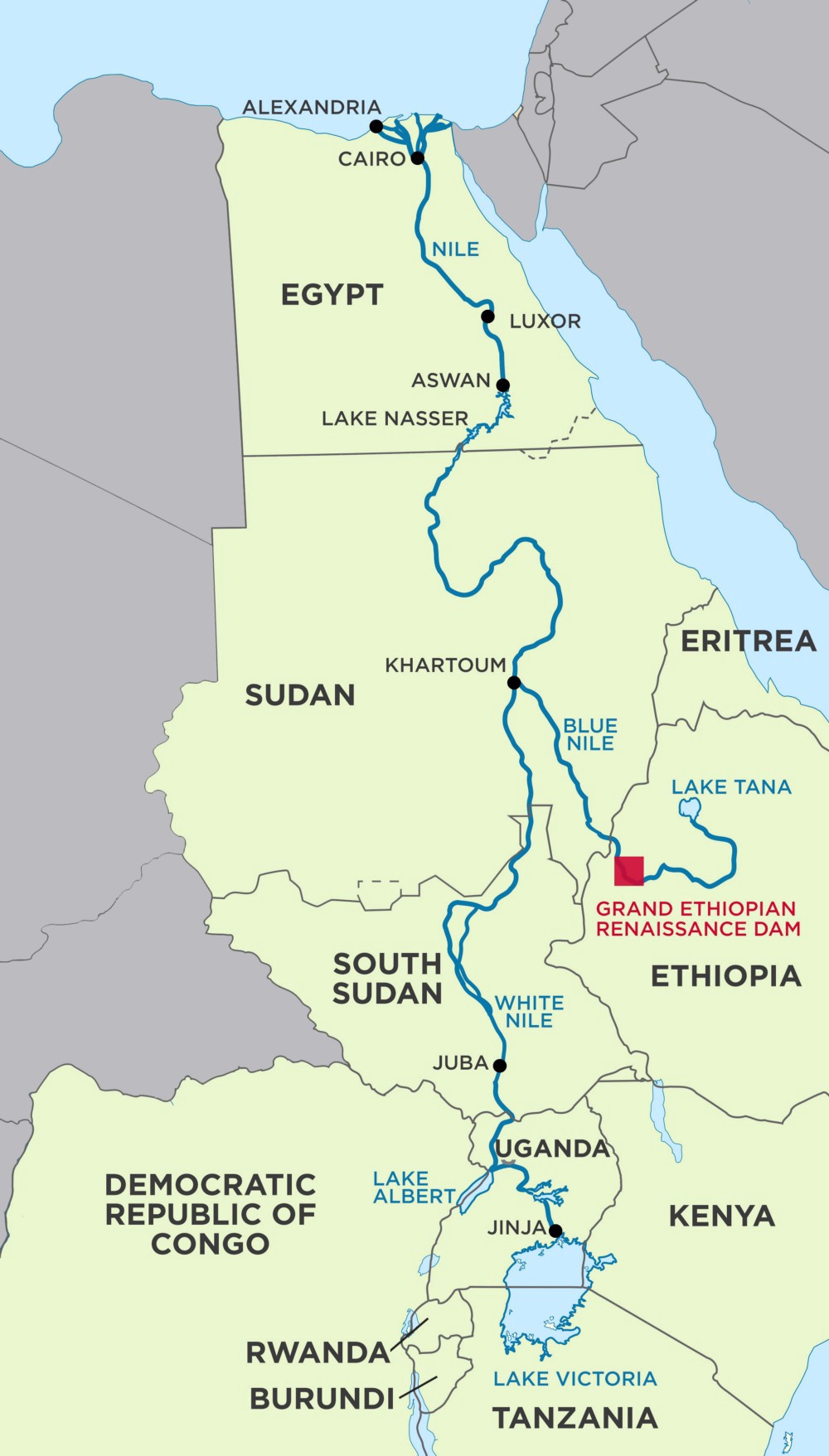 The Nile River has two main tributaries. The White Nile originates from the Nile equatorial lakes region and the source of the Blue Nile is from the highlands in Ethiopia. The intensity of rainfall in these two sub-basins varies considerably.

Almost 86% of the water reaching Egypt originates from Ethiopia. This can rise to almost 95% in rainy seasons. Despite Ethiopia’s massive contribution to the Nile River flow, its use of the water from the river system is almost nothing. It also still rankles that Egypt opposed external funding being sought which thwarted Ethiopia’s past attempts to develop water storage facilities and use the Blue Nile water for hydropower generation and irrigation.

The last 10 years have also seen significant economic and political changes in the Blue Nile basin. These have included the birth of a new state (South Sudan), the Arab Spring in Egypt, and impressive economic growth in Ethiopia with large-scale foreign investments in agriculture.

Taking advantage of this changing environment, Ethiopia officially launched its long-planned and its largest-ever engineering project, in April 2011. This dam, with a budget of $4.8 billion and an installed capacity of 6,450 megawatts, is situated about 15km from the Sudanese border. The project will create a reservoir with a volume of more than 74 billion cubic metres.

Ethiopia’s motives to build this massive hydropower dam are quite obvious. Only 10% of its hydropower potential is tapped while only 25% of the population has access to electricity.

The Ethiopian government plans to supply electricity to more of its population. It also intends to sell surplus energy to neighbouring countries.

Egypt, which has been in virtual control of the Nile water for centuries, is alarmed by Ethiopia’s challenge to its domination in the basin. Egypt is almost completely dependent on the Nile for its water supply and irrigation.

There is no doubt that large-scale water diversions upstream would have a severe impact on Egypt’s food production and public health. The dam is meant to generate hydropower, which means it will only store the water, not divert it for irrigation. Still, Egypt is seriously concerned about losing its historical control of Nile water.

For its part, Ethiopia sees the dam as a matter of national pride and a symbol of its economic success. It has received some support from Sudan, which hopes to buy cheap hydropower. The dam may also help to prevent seasonal floods, regulate the river flows and extend the life span of Sudan’s dams by preventing silting.

Several other White Nile riparian countries like Kenya, Rwanda, Tanzania, and Uganda also support Ethiopia’s right to build the dam as they don’t want Egypt to be seen as owning the river.

Several attempts at building a basin-based water management framework, particularly through the World Bank-initiated Nile Basin Initiative, have failed. The sticking point was Egypt’s stance on protecting its historical rights.

Egypt’s initial unequivocal opposition to the project has been diluted to a large extent in recent years. This was particularly true after technical negotiations were initiated between water officials from Egypt, Ethiopia and Sudan in 2013.

Egypt has now accepted the dam as fait accompli – it’s already more than 70% complete. But it wants to have a say in its operation.

Last year tripartite negotiations between Ethiopia, Sudan and Egypt failed to get an agreement over the filling and operation of the dam. The result was that, for the first time, an outside party – the US – got involved. But the strong-arm tactics of the US to force an agreement failed in March 2020 as Ethiopia refused to accept the conditions.

The African Union is now facilitating talks among the three riparian countries. They are still trying to:

Even as the talks continue, Ethiopia has declared it has achieved its target for the first year of filling the dam.

Egypt cannot do much except put diplomatic pressure on Ethiopia to agree to an acceptable deal. Its attempts to get the support of the Arab countries, and even asking the UN Security Council to intervene, have not been successful in restricting Ethiopia’s construction of the dam, or starting to fill up the reservoir.

Despite previous threats by Egypt of military action, I don’t believe this is a serious possibility, for a number of reasons.

To date no country has fought a war over water resources. There is no reason why this case is different.

Also, Egypt does not have overwhelming military superiority over Ethiopia. In addition, waging a war would be logistically tough because it has no contiguous border with Ethiopia. This means it would need Sudan to join the war.

What about the option of simply bombing the dam? Unlikely, as this would make Egyptian dams and water projects legitimate targets for Ethiopian forces.

Another major factor is that Ethiopia has much greater support than Egypt among the other Eastern African riparian countries of the Nile basin. All would like to develop the Nile water resources for hydropower generation and irrigation without being restricted by Egypt’s historical rights.

The dam has increased the urgency of reaching an agreement among the Blue Nile countries. This could open the way for basin-based cooperation among all the Nile countries, a process that’s been blocked by rivalry between Egypt and Ethiopia.

The Ethiopian dam project has the huge potential to be not only a massive source of hydropower production for energy-starved, under-developed Ethiopia, but it will also help to facilitate economic integration in the region. It has certainly created tension in the region but at the same time it has helped to break the centuries-old stalemate of Egyptian domination in the basin.

An agreement over the filling and operation of the dam among Egypt, Ethiopia, and Sudan will build a strong foundation for the future transboundary water cooperation in the Nile basin.

PreviousPlans for a Dam Across the Nile Triggered a War in 1956: Will it Happen Again?
Next 2019 in Review: Customer Insights for African Mini-Grid Developers