For all the of the many reasons, possibilities and opportunities that have led me to dedicate my career to geothermal energy, as a pragmatist, there is also a clear recognition of the primary challenges to holding the concept back from a rapid global embrace: geographic limitations and development cost.

While it is certainly true that technology is advancing rapidly that targets one, or both, of these barriers by enabling deeper drilling, lower temperature resource utilization, closed loops and enhanced geothermal systems, there is one critical and unchangeable fact: geothermal energy is not a commodity.

One cannot ship a barrel of hot water around the world for consumption, as we do with fossil fuels. Of course, geothermal power can be generated and transmitted over long distances, or in some rare cases, such as Iceland, the hot water piped directly over long distances for heating. But in both cases, there are losses that still restrict the economic utilization of a geothermal resource to being a regional source of renewable energy. 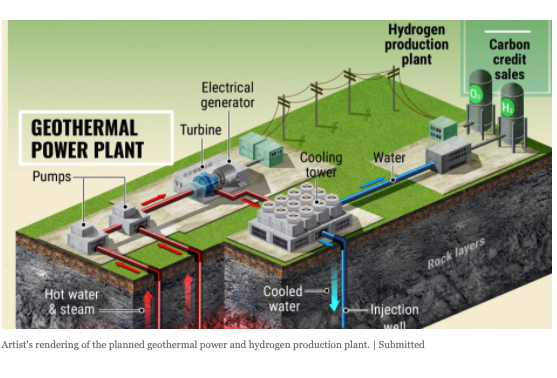 In recent times, governments and industries alike have recognized the incredible potential that hydrogen can play in global decarbonization, especially in the context of transportation fuel. In this vision, green hydrogen is the apex, as it is defined as hydrogen produced using renewable energy through electrolysis. Most think that solar, wind, and hydro are the renewable power source behind green hydrogen. However, the real golden ticket is baseload geothermal power.

The advantage of geothermal power generation is that it runs full time and is not impacted by whether or not the sun is shining or wind is blowing; it provides consistent, baseload power output capability that makes it a perfect energy provider for green hydrogen facilities that operate in the same manner.

Geothermal and green hydrogen designated as a system is a symbiotic relationship with incredible advantages that only come when they are paired together; baseload power supply maintains hydrogen production 24 hours a day, surface footprint is minimized, and government subsidies can be stacked to enable development.

Since green hydrogen can be transported or stored for later use, it is the method that enables the pseudo-commoditization of geothermal energy.

There are many remote locations around the world, and especially in the Pacific Rim “Ring of Fire,” where vast geothermal resources exist but with small local populations, and therefore limited need to utilize these resources to its full potential or have a means to fund the development. However, coupling this with green hydrogen, there is now a new model emerging that greatly increases the attractiveness of geothermal in remote areas.

This is not going unnoticed by the industry as well: the recent Halcyon Project in New Zealand has just been finished, which is a green hydrogen plant powered by local geothermal power. Other projects like Meager Creek Development Corporation in British Columbia are in planning, but there are also some extremely visionary organizations like Fortescue Future Industries who are laser-focused on bringing green hydrogen to the world and relying on massive amounts of geothermal energy to enable it.

Now that the possibilities of enabling a pseudo-commoditization of geothermal with green hydrogen are taking shape, how is the other primary challenge of development cost covered with this partnership?

While there is government policy being implemented in many countries financing and supporting the development of green hydrogen, I’ll focus just on the USA as an example. The new Infrastructure and Jobs Act (IIJA) created an Office of Clean Energy Demonstrations, with a budget of about $21.5 billion dollars, designated to meet a set of 10 goals. While geothermal energy is not mentioned specifically, it can easily be interpreted that several areas of the funding could go to geothermal developments to help meet the greater goals.

Of that $21.5 billion budget, the largest portion, $8 billion, is designed for “Regional clean hydrogen hubs,” which is inclusive of the producers, consumers and infrastructure needed to build out the network. The Office has the goal of developing at least four hubs in different regions of the U.S., with at least one being a green hydrogen facility. (The others are blue hydrogen, fueled by splitting natural gas into hydrogen and CO2.)

Of course, there are massive power requirements for green hydrogen generation facilities and networks of this size, and it is interpreted that this funding would be inclusive of the power source required. The actual footprint of how a network would look is beyond my area of expertise, but it seems reasonable to think that there would be a mix of centralized/direct power sources; Centralized geothermal power plants for hydrogen generation and compression facilities, and then decentralized facilities (such as H2 fueling stations) that would  purchase the renewable energy from the grid, or simply be powered by hydrogen-fueled generators on-site.

Many questions still exist. For example, if a geothermal power plant is built 50 miles from a green hydrogen generation facility, is it considered a part of the hydrogen hub and therefore qualify for funding? However, it is expected the criteria and structure is something that will become clearer as we move though 2022. It seems highly plausible that portions of this $8 billion will become available to geothermal developers and lease holders such as Fervo Energy, Cyrq and Ormat. They have a huge potential to benefit from this, as does the industry as a whole.

Geothermal has always had to struggle to gain visibility for the funding needed to expand development. But with an incredible amount of funding going into green hydrogen, “piggybacking” into this area opens doors for a high volume of geothermal development in more geographically diverse regions.

The green hydrogen industry and geothermal industry have an enormous degree of synergy to offer each other and are better together. A goal of unification, both in terms of joint project development and global policy creation, should be established by leaders of both industries to take full advantage of the opportunities at hand and better foster the energy transition.

The thoughts and opinions in this essay are mine and not those of my employer.

This opinion article is published with permission from the author.

PreviousWhat is Green Hydrogen and Why do we Need it? An Expert Explains
Next Denmark Provides US$30.1 million Grant to AfDB-African Water Facility