You are at:Home»Headline News»Global Renewables Investment Falls in First Half of 2019

Bloomberg New Energy Finance has published analysis of renewable energy investment numbers for the first six months of the year and reported Chinese investment fell 39% to $28.8 billion. That deflation dragged global numbers down 14% to $117.6 billion.

BloombergNEF said China’s retreat was due to a shift from fixed public subsidies to auctions. Solar and wind investment both suffered in the opening half of the year and Bloomberg has joined the list of analysts predicting a return to health in China for the remainder of 2019, now the authorities in Beijing have spelled out their new ‘grid-parity’-driven solar policy.

Justin Wu, head of Asia-Pacific for BNEF said: “We expect a nationwide solar auction happening now to lead to a rush of new PV project financing. We could also see several big deals in offshore wind in the second half.” 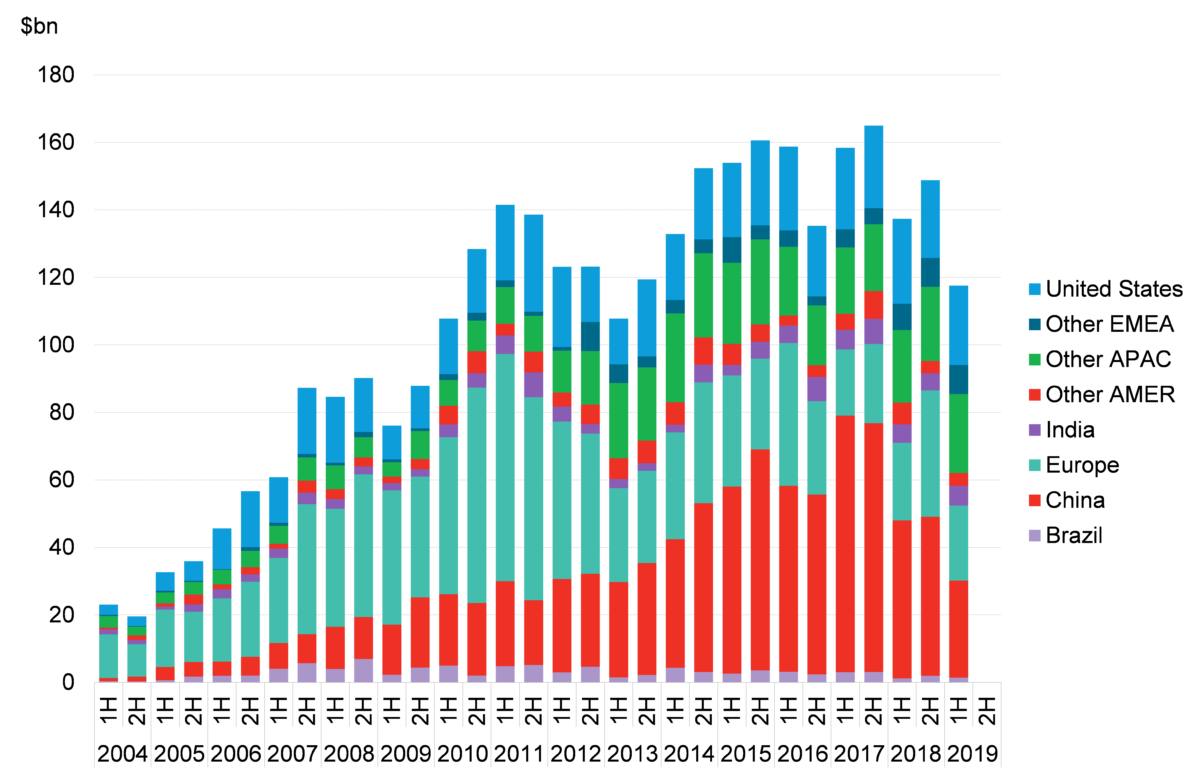 The six-month fall in global clean energy investment came despite financial closure for multi-billion dollar projects including the $4.2 billion Al Maktoum IV Solar PV and CSP park, with its combined 950 MW generation capacity. In Taiwan, two offshore wind arrays with generation capacities of 640 MW and 900 MW – and a combined cost of $5.7 billion – completed their investment phases.

Jenny Chase, head of solar analysis for BNEF, said: “Al Maktoum IV is an unusual one in combining three different types of solar – the thermal technologies of parabolic trough and tower with conventional PV – but it is also a strong signal of the appetite for solar electricity on the part of both Middle Eastern countries and international financiers.”

With China seeing falling clean energy investment amid policy uncertainty in the opening months of the year, the world’s next two biggest renewables markets also suffered. In the U.S. and Europe, investment volumes fell 6% and 4%, respectively, with both banking $22-23 billion.

However spending in some second tier markets rose. Japan, for example, attracted $8.7 billion – an increase of 3% – in the first half. Investment in India leapt 10% to $5.9 billion as the nation aims to install 175 GW of renewable energy generation capacity by 2022. Brazil also saw its market flourish with a 19% investment hike to $1.4 billion.

Exceptions to the rule

Spain bucked the overall European trend with a 235% first-half increase in renewables funding to $3.7 billion, followed by Sweden, with a thumping 212% jump to $2.5 billion. The U.K. also saw increased investment, to $2.5 billion for a 35% advance. Ukraine also performed well, with a 60% increase to $1.7 billion.

Aside from investments in generation assets, BloombergNEF also noted a 37% increase in backing for clean energy companies via public markets, at $5.6 billion. That figure included an $863 million secondary issue for Tesla and a $650 million convertible bond fundraising by Chinese EV manufacturer NIO.