You are at:Home»Headline News»Global Energy Storage Capacity to Grow at CAGR of 31% to 2030

Woodmac principal analyst Rory McCarthy said: “We note a 17% decrease in deployments in 2020, 2 GWh less than our pre-coronavirus outlook. We expect wavering growth in the early 2020s, but growth will likely accelerate in the late 2020s, to enable increased variable renewable penetration and the power market transition.”

Energy storage is still a nascent market, a relatively new investment class with underlying risks. The stakeholders – whether end-consumers or big equity investors – are interested in continuing to invest in the sector and do not appear to be hindered by the pandemic and economic recession impacts.

McCarthy said: “Investment decisions are likely to be pushed back in some cases, but the general trajectory of the power market transition and the need for energy storage to enable this has not changed.

“If anything, the transition may be accelerated as governments around the world grapple with how to recover their economies more sustainably than in the past with upside for the energy storage industry.” 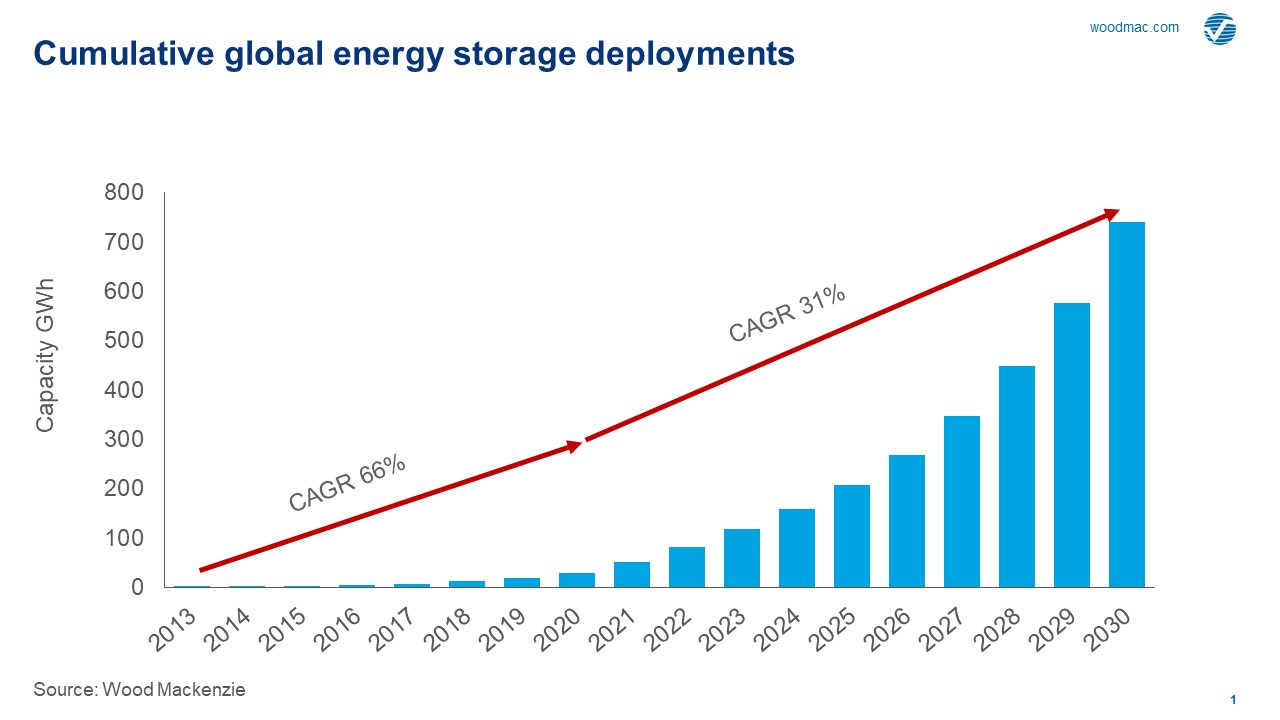 The US maintains its pole position and will make up over 49% or 365 GWh of global cumulative capacity by 2030. Utility resource planning in the US is set to take a front seat for deployments over the coming decade. In the past two years, utility approaches to renewables and particularly storage have shifted seismically, with majority of utilities dramatically shifting planned resources towards renewables and storage due to cost and state-driven clean-energy goals.

As a result, the US FTM market is set to surge through 2021 due to significant short-term resources planned before slowing slightly through 2025. Beyond 2025, growth will become steadier as wholesale market revenue streams grow and utility investment is normalised. The market will reach a CAGR of 36% over the coming decade, with cumulative capacity installed approaching 300 GWh.

China, coming in second after the US, is also expected to see its cumulative storage capacity grow exponentially. It will account for 21% or 153 GWh of global cumulative capacity by the end of the decade. Ancillary service market is the primary revenue stream for the FTM market and continues to attract hybrid storage installations in China from 2020 to 2025. Firming renewables capacity to reduce curtailments is the second most important driver in Australia, China, South Korea and Japan. China launched a policy that requires solar and wind developers to make up the costs for building stable and grid-friendly renewable generation assets.

Energy arbitrage make up additional revenues for storage as more Asia Pacific power markets may be fully liberalised from 2025 to 2030.

Europe’s growth story, on the other hand, is expected to be slower than its global counterparts. The UK and Germany will continue to dominate the FTM market out to 2025. Frequency response auctions remain one of the key revenue streams. France and Italy are also opening up with both capacity and ancillary service markets open or opening. Spain, and the rest of continental Europe is expected to follow, with potential help from the European Commission and its green recovery deal.

The future of storage will require safe, low-cost batteries, with battery manufacturing splitting between stationary and EV batteries due to differing needs cases. LFP (lithium iron phosphate) is poised to overtake NMC (nickel manganese cobalt) as the dominant stationary storage chemistry within the decade, growing from 10% of the market in 2015 to more than 30% in 2030.