You are at:Home»Headline News»Floating Structure Designed for Offshore Solar PV

The test was conducted on a floating structure with 64 modules on a 1:13 scale, in an artificial ocean basin in which waves, wind, and currents can be simulated in real-time. The model of the floating array was equipped with sensors that collected wave information, movement and loads in the mooring and connection points. Moss Maritime is using these data to calibrate its numerical model, which will later be used to design and optimize the real installation.

The first test, Sintex experts stated, showed the floating system design for offshore location is able to withstand the simulated, difficult environmental conditions of the Norwegian Sea, where the model should be applied for a pilot project under development by Equinor off the island of Froya, near Trondheim. 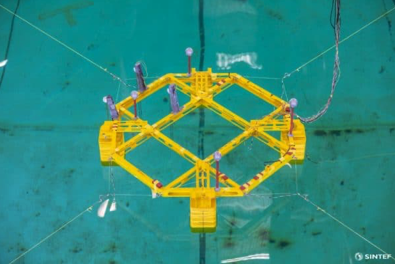 “Today’s concepts are mostly designed for lakes and hydropower reservoirs and many of them would fall short if they were exposed to waves,” said  Øyvind Hellan, vice president for research, ships and ocean structures at Sintef. “Our goal is to expand the pilot plant to become a full-scale research and development facility.”

This installation should be an 80mx80m floating array with panels installed at a height of less than three meters above the water surface. Its anchoring system is claimed to give the installation enough freedom to cope with the waves.

Equinor intends to measure the plant’s power production to assess how harsh weather conditions and rough waters affect its performance. “If we succeed here, we can succeed anywhere,” said, in January, Hanne Wigum, the head of Equinor’s solar and wind tech unit.