Local Ethiopian newspaper, Capital, reported last week that commission testing is complete on two units making up 750 MW. The Office of the National Council for the Coordination of Public Participation to the Construction of GERD widely shared the story on social media. 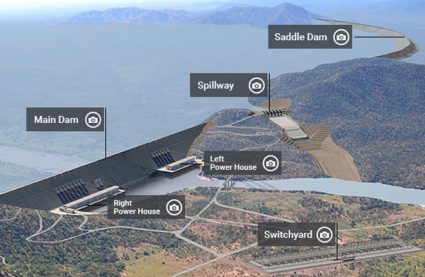 GERD is located on the Blue Nile—a significant Nile River tributary—in the northwestern Ethiopian region of  Benishangul-Gumuz-Gumaz, about 500 kilometers (km) northwest of Ethiopia’s capital Addis Ababa and 15 km from its border with Sudan. The project is being built by Webuild Group  for state-owned Ethiopian Electric Power. When finished, it will comprise a main dam in roller compacted concrete with two power stations installed at the left and right banks of the river.

Ethiopia’s reported progress on GERD comes amid a complex decade-long diplomatic dispute embroiling Ethiopia, and Egypt and Sudan, its neighbors downstream the Nile River, as well as the international community. Read more

Related news: Plans for a dam across the nile triggered a war in 1956. Will it happen again?

Sudanese authorities have said GERD could help regulate waters of the Nile and reduce the risk of flooding, but the country has expressed concerns about the project’s impact on the efficiency of its 280-MW Roseries Dam, and it has strongly decried unilateral action by Ethiopia to fill the GERD reservoir. Egypt, meanwhile, has similar fears about its water security, especially concerning its 2.1-GW High Aswan Dam (HAD), which is today Africa’s largest hydropower facility. The dam also pivotally serves Egypt’s agricultural, municipal, and industrial water requirements through regular annual releases of 55.5 billion cubic meters.