You are at:Home»Headline News»Eskom Sets a Debt Goal of R200 Billion – Load Shedding to Remain Until 2021

South Africa: Speaking yesterday on the state of the system, Eskom’s CEO, Andre De Ruyter explained that the utility is implementing a number of measures to reduce its debt burden, which includes cutting cost and raising tariffs through discussions with the National Energy Regulator of South Africa (Nersa). The regulator recently granted Eskom R13.3 billion in tariff recoveries. Read more

De Ruyter added that the recovery would also result from a stabilisation of their balance sheet. He did not give any timelines as to when the debt milestone is expected to be achieved. 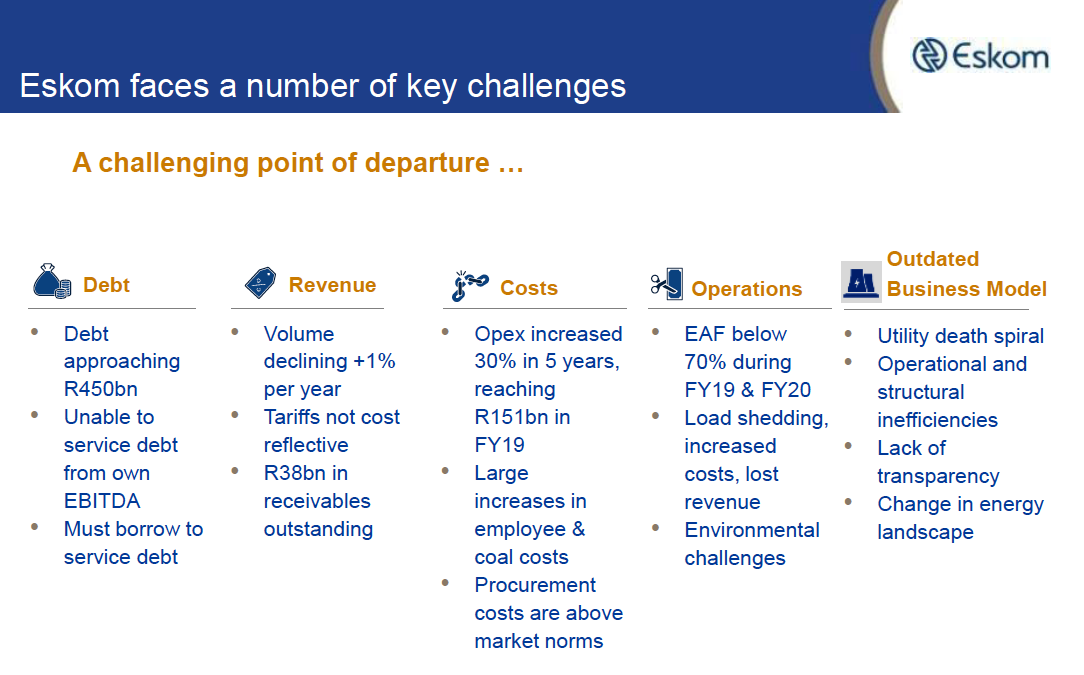 Critical to the debt restructuring is the unbundling of Eskom into three separate entities namely; generation, distribution and transmission. Read more

De Ruyter announced that each of the revenue generating divisions will be apportioned some share of debt. ‘It cannot all stay with generation, where most of all the debt was incurred through the construction of Medupi and Kusile power stations. The boards of the entities are currently engaging on apportioning the debt and understanding the balance sheets of each division”.

De Ruyter said Eskom is aware that lenders are concerned about the utilities unsustainable debt and how the unbundling into three entities will play out regarding the security of their assets. “As we develop the business model and financing model and structure the balance sheet, we will engage with lenders. Some discussions have started,” he said.

De Ruyter assured that lenders were being appraised on progress made and that they were not being left behind on the journey as it is important for Eskom to ensure it does not default on agreements. “We fully understand that will be highly undesirable,” he added.

No financial performance update was provided at the briefing. De Ruyter did announce that Eskom expects to be profitable at an operational level but the current debt servicing costs will result in an overall loss.

Eskom estimates three days of load shedding at stage one over the winter period.  However Eskom’s Chief Operating Officer, Jan Oberholzer stressed that the risk of load shedding would remain till August 2021, given the unpredictability and unreliability of the system.