The decision to refuse the EIA raised the following: Cumulatively, there are expected negative impacts to the ecosystem, including avifauna, estuary and marine environments. Macrobenthos, that is, organisms living on the bottom of the water body, are particularly vulnerable to dredging activities proposed by Nseleni.  Adequate monitoring programmes of estuarine birdlife were not conducted, and insufficient and inefficient mitigation measures were put in place to counter the negative impacts on the affected ecosystem and its local communities. 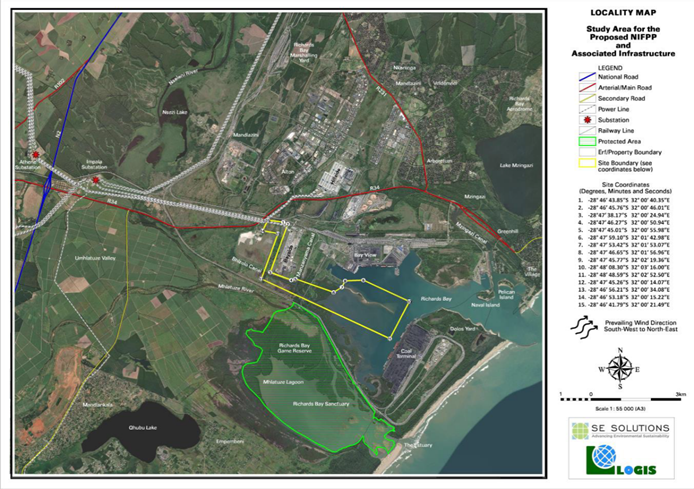 In addition to NIFPP’s EA refusal on the 19th of November 2021, Nseleni’s Water Use License (WUL) was also refused on 25th November.  The refusal raised the fact that the dredging of the sea bottom would lead to severe impacts on the estuarine environment, piling and other activities interfering with the flow of water, as well as, heated water discharge into the ocean resulting in impacts on marine ecology.

Impacts on important wetlands such as uMhlathuze Estuary, Richards Bay Estuary and Kabeljous flats were not adequately assessed and proper geohydrological impact assessments were not conducted. Negative impacts on estuaries and ocean will also affect fish spawning grounds, fish, fisherfolk, fishing communities and the ecotourism sector that provides jobs and livelihoods to the local communities of Richard’s Bay.

The public participation process was flawed and inadequate in both the EA and WUL applications. Apart from the lack of consent obtained from landowners, no public participation documents were uploaded onto the website. It is also of concern that local land users and fisherfolk were not notified and consulted with to establish impacts on local economies with changes in land use. Negative socio-economic impacts through the loss of biodiversity had not been assessed, as well as toxicity from dredging activities and climate change assessments of the watercourse.

Nseleni are appealing the environmental authorisation refusal decision and will have 30 days from the decision dates to respond to each refusal.

Richard’s Bay alone has six gas-to-power plant applications with a total capacity of about 15000 MW including 450 MW Karpowership, 8400 MW NFIPP, 3000MW Eskom Combined Cycle Power Plant (CCPP), 450 MW Phinda Power Plant, 2000 MW Richards Bay Gas to Power Plant 3 and the 400 MW Richards Bay Gas to Power Plant 2.  Whereas the total energy from gas production allocation within the IRP is only 3000MW. The Eskom CCPP environmental authorisation was issued on 23rd December 2019 and on 27th January 2020 ngo’s groundWork and the South Durban Environmental Alliance (SDCEA) with the assistance of the Centre for Environmental Rights appealed the decision, which was then rejected by the Minister of Forestry Fisheries and the Environment in October.

groundWork and SDCEA, represented by Cullinan and Natural Justice, submitted papers in the High Court in April this year requesting a review of the rejection of the appeal by the Department of Forestry, Fisheries and the Environment (DFFE) and are awaiting a response. This is landmark litigation as the case is the first time that a gas-to-power plant has been challenged in South Africa. Phinda Power Producers were also granted an EA on 27th July this year and groundWork’s appeal of the decision was dismissed on 20th November.

Major gas companies such as Sasol, Shell and Total are advocating for fossil gas to be used as a ‘transition fuel’. While the International Energy Agency (IEA) says that to limit global warming to 1.5oC, 2021 needs to mark the end of new investments in, not only coal, but in new oil and gas supply. More committed action is required if we are to reduce the devastating impacts of climate change on Africa which will be the hardest hit, and  in particularly its poor and coastal communities

It is of concern that environmental assessment practitioners, who are meant to act independently, conduct cut-and-paste and tick-box exercises without proper and thorough assessment of the impacts of gas on people and the environment, including the cumulative impacts of gas-to-power plant proposals in the country’s major Ports including Coega and Saldanha Bay. Gas developments are destructive to ecosystems, emit powerful greenhouse gases such as methane that accelerate the impacts of climate change, impact on local livelihoods and do not provide healthy local jobs that should form part of our country’s much needed just transition.

Growing evidence shows that gas is not needed to meet our energy requirements, including baseload, and that all our energy needs can be met through a fast buildout of renewable energy. In order for our energy transition to be just, socially-owned renewable energy with localized production is needed.