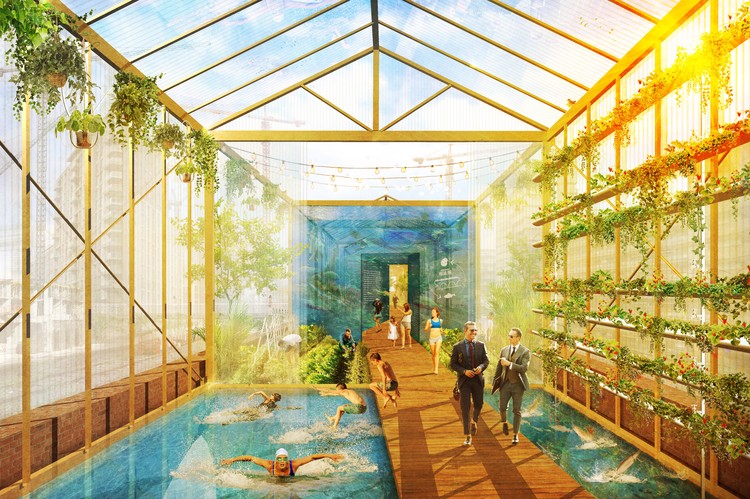 As the team outlines, “Fish n’Chips approaches the task to reactivate a disused segment of an elevated railway in the district of Hammersmith in London, with an interactive and ecological proposal. While the Paris’ Promenade Plantée stands for a regained recreational space of the 90s, the New York Highline can be seen as a leading project at the turn of the millennium for a design feature with a cultural value.” Fish n’Chips emphasizes eco-sociological urban processes to usher in a new era of inner-urban post-industrial infrastructure.

Through an aquaponic system, fruits and vegetables will be cultivated in green houses and create an ecological metabolic cycle with fish breeding in tanks under the railway arches. The revival of the district is not only based on food production but on an efficient process with additional interactive features. City dwellers can participate in the food production and can benefit from the infrastructure itself. Leisure activities like swimming, fishing and urban gardening next to cultural events in open green space will soon be daily life amidst the urban hustle of London. 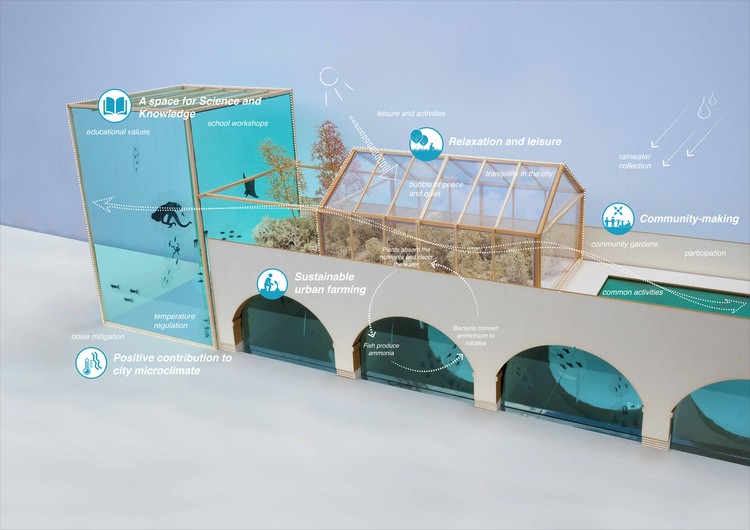 While rainwater is gathered from surrounding roofs to feed the fish tanks and swimming pools, the tank water, high in nutrients and by-products of the fish production, is used for watering the green houses. In order to complete the highly efficient cycle, the excess water is then recirculated back to the fish tanks. The neighborhood also benefits from activities, such as community gardening in the green houses,and contributes at the same time to the local food production. Fish n’Chips would turn the vicinity into a vibrant spot with a showcase model for a healthy urban climate in ecological and social terms.

PreviousCrossBoundary: 60 Solar Mini Grids to be Rolled out in Tanzania
Next Zambia: Renewable Energy Can Spark Economic Growth