You are at:Home»Headline News»Datamaran Unveiled For Offshore Wind Resource Surveys

The maiden Datamaran recently completed 18 months of tests in the Atlantic. The technology “shows dramatic improvements in lead-time, cost and aerial coverage versus today’s options”, according to the two companies.

The 16-foot vessel is propelled by a rigid wing sail while the LiDAR, navigation, and communication systems are powered by deck and sail mounted solar panels and large batteries. The system operates completely autonomously without a manned support vessel, continuously transmitting captured data to an onshore operations base via fault-tolerant communication channels. 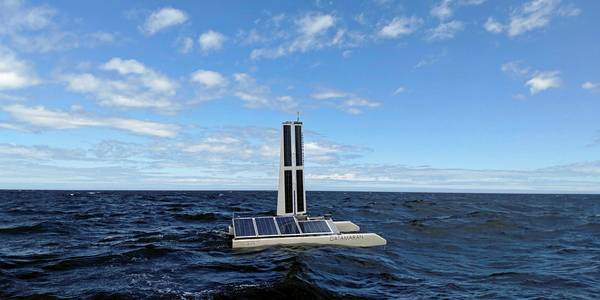 Equinor Wind US president Christer Af Geijerstam stated: “Equinor’s collaboration with Massachusetts-based AMS underscores our commitment to collaborate with, invest in, and support local business. The emergence of the US offshore wind energy industry presents an exciting opportunity for local, nimble, innovative companies to partner with established wind-farm developers.”

As well as collecting wind data, the Datamaran is kitted out with sensors to measure current and wave characteristics and detect avian and marine mammal during meteorological ocean, bathymetric and hydrographic surveys.

Floating Lidar (light detection and ranging) technology, which shoots a laser beam into the sky and gauges wind flow by reading the way it “scatters” in the atmospheric particles, is now treated as “bankable” measurement technology in Europe, following successful trials at several large projects, and a first commercial unit was recently installed off Asia.