The certificate was awarded by Eco Standard South Africa to the project manager Mainstream Renewable Power, the wind farm Khobab Wind (RF) and Concor, commending the concrete’s low carbon footprint. According to Eco Standard South Africa, the replacement of cement by alternative material in the product saved over 1,9 tonnes of carbon dioxide from being emitted.

The concrete was used to construct 61 wind turbine bases, each measuring 19 metres in diameter and consuming 60 readymix truckloads of concrete. According to Stephan Venter, contracts manager at Concor, the company’s commitment to Zero Harm includes high environmental standards as well as an acknowledgement that climate change is a major threat facing the planet. 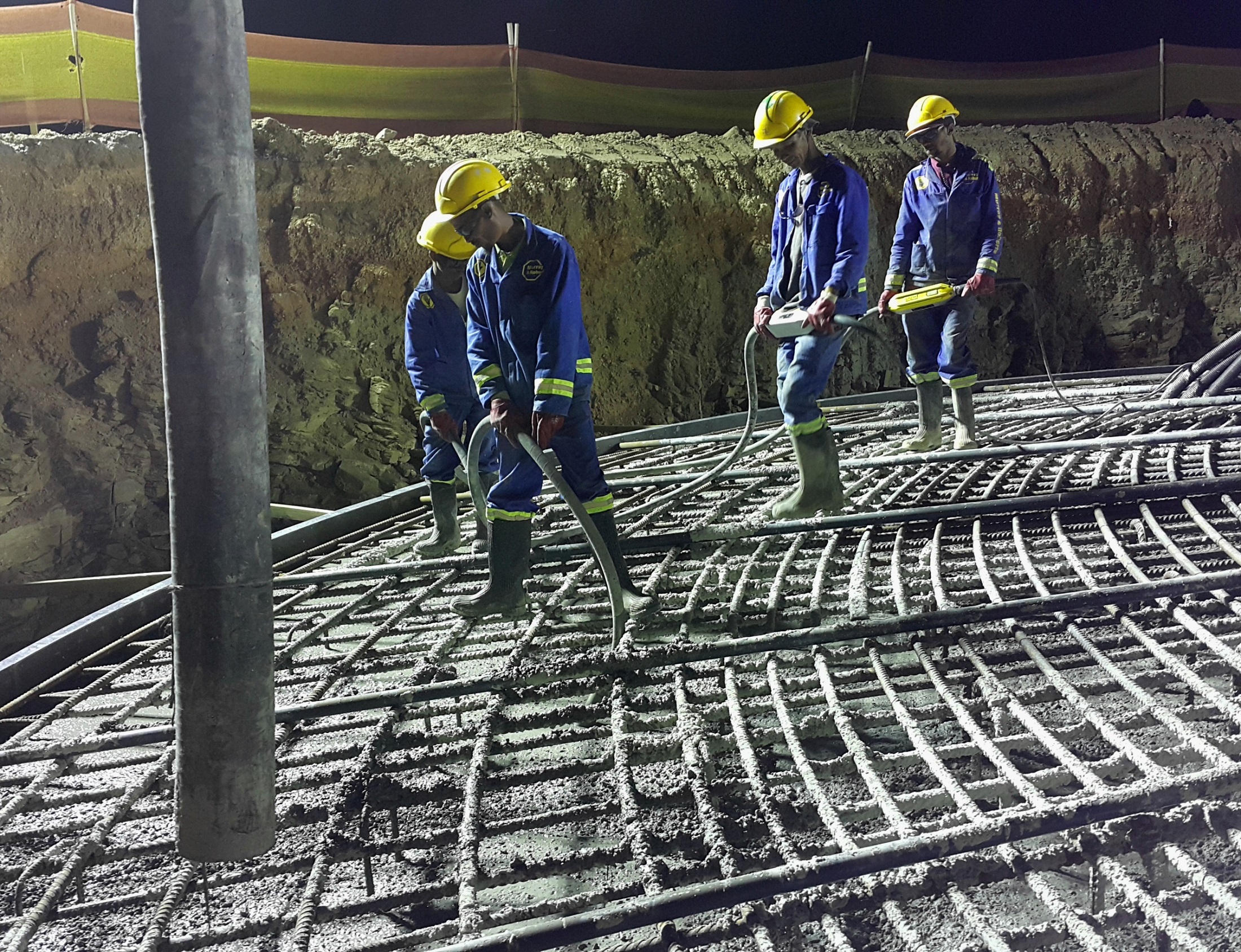 Concrete being poured after completion of the steel fixing. Image credit: Concor

“It is therefore important that we reduce our carbon footprint wherever we work, and our innovative approach to doing this often also reduces costs for our customers – as it did at Khobab,” says Venter.

The remoteness of the site potentially meant trucking 80,000 tonnes of aggregate required for the concrete bases – some 3,600 truckloads – from the nearest existing source 300 km away. Instead, Concor was able to identify a deposit of more suitable dolerite close to site, and establish its own quarry and crushing facilities.

“This substantially reduced the carbon footprint of the material,” Venter says. “It also resulted in greater economy for the project as a whole, as we could generate our own stone rather than relying on a commercial source.”

The low carbon concrete mix design was achieved by substituting cement with ground granulated blast furnace slag (GGBFS) or fly ash. For the Khobab project, GGBFS was sourced as a waste product from the steel works at Saldanha Bay in the Western Cape. 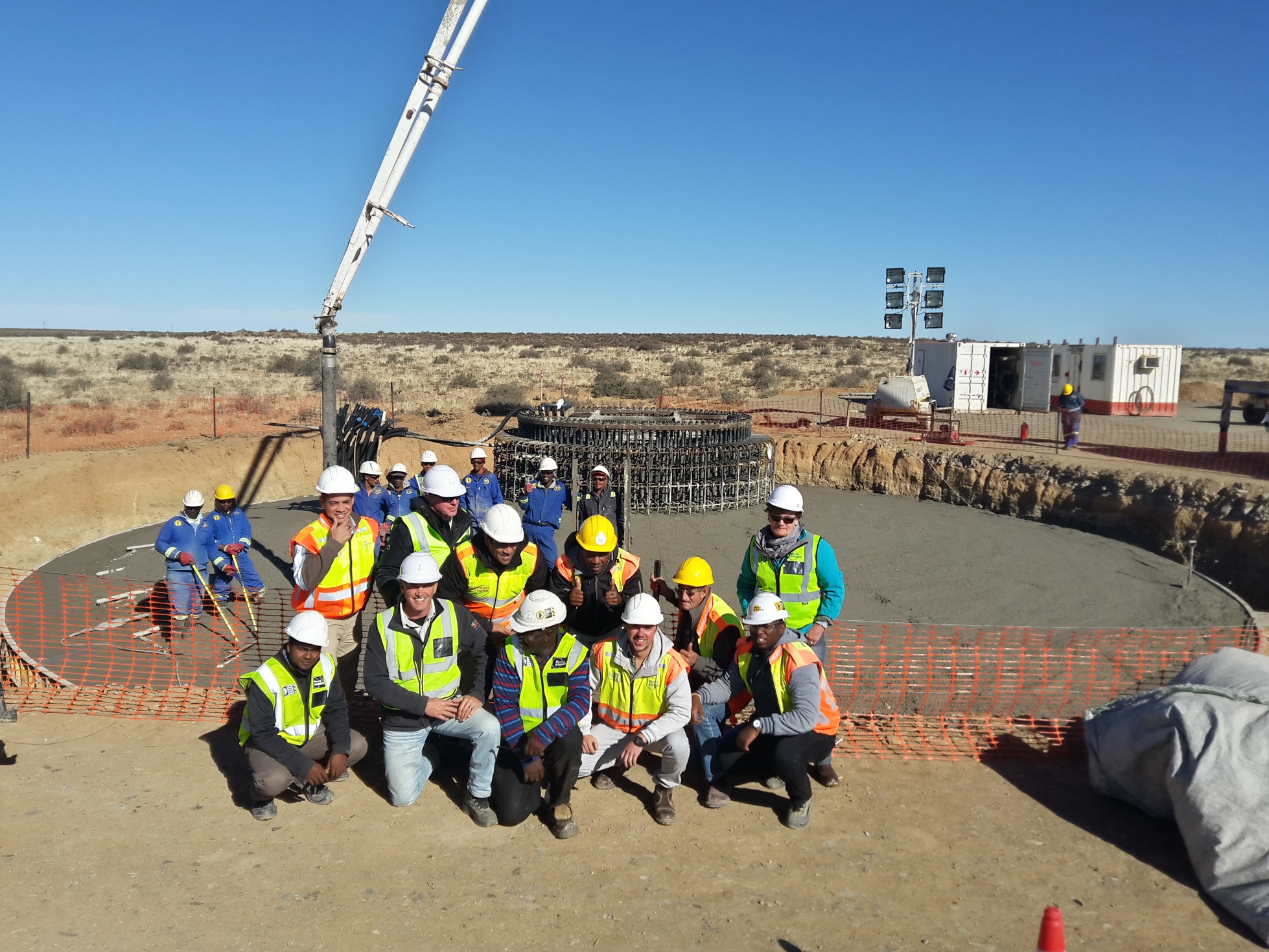 “What is also significant is that with the demanding application in the turbine bases – completed in 2016 – there could not be any compromise in the strength and durability of the concrete,” he says.

The blinding for each base was done with a 95% cement replacement, while the concrete for the bases themselves achieved a 90% cement replacement. Whereas 320 to 360 kg of cement is normally required for a cubic metre of concrete to reach 30 MPa in strength, the use of low carbon cementitious replacements allowed this proportion to be reduced to just 35 kg. The average strength achieved in the Khobab bases was 42,1 MPa, while in the blinding this was 22,3 MPa.

“Testing of the concrete mix options was conducted for six months before the project, to identify the optimal mix for the application,” Attwell says. “In the years since the contract was completed, we have continued to test at intervals and have confirmed that the strength and durability have increased year on year.”

“The embodied carbon emissions in slag is just 10% of the level in cement,” he says. “Fly ash is orders of magnitude lower, at just 0,1% compared to cement. Using these cement replacements, it is possible to significantly reduce a project’s carbon footprint.”

The low carbon concrete mixes were specially designed to ensure the same setting parameters as more conventional mixes. Attwell notes that a high slag or ash content in concrete tends to extend the setting time from the normal four to six hours to as long as 24, 48 or even 72 hours. The specialised concrete mixes also allowed the project to deal with a severe shortage of suitable water, as the site was in an arid region which was also experiencing drought conditions.

“The only groundwater available contained sulphate levels six times higher than normal concrete required,” he says. “This would have led to delayed ettringite formation (DEF) and a rapid deterioration of the concrete in the months after it had set.”

Eco Standard South Africa also commended the concrete’s use of recycled water, which was appropriate for this water scarce region and also reduced the requirement for the disposal of concrete wastewater.