The letter of intent defines the cooperation among the parties to finalise the terms of a power purchase agreement between the Grand Eweng Project Company to be formed and ENEO, under the supervision of the MINEE, for the sale of electricity produced by the Grand Eweng hydropower plant.

In addition, the letter of intent sets out the framework and certain milestones for the development of the project on a build, own, operate, and transfer (BOOT) model, which transfers Grand Eweng to the State after the concession term.

The Grand Eweng project includes the development, design, financing, construction, and operation of a hydropower plant on the Sanaga River between Yaoundé and Douala in the eastern Littoral Region.

The project consists of a dam and reservoir with a hydroelectric facility and will be financed and commissioned in phases. The first phase is expected to add up to approximately 1,000MW of installed capacity generating over 7,000 GW/hours average annual energy generation.

The full future potential installed capacity of the site will be up to 1,800MW producing 9,000-gigawatt hours average annual energy generation useful for clean peaking power. 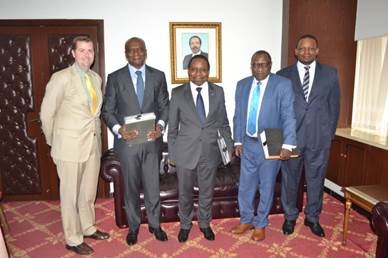 This power will contribute to meeting Cameroon’s national electricity demand that is expected to be more than 3,300MW by 2030, which may reach 4,000MW with high growth.

Peter Briger, Chairman and Chief Executive Officer at Hydromine, commented: “Hydromine is confident that the studies undertaken in consultation with the Government have produced a world-class hydropower project that will greatly benefit Cameroon and attract international investment.

“We are convinced that Grand Eweng is achievable in the near-term and will enable sustainable development in Cameroon and the region. We sincerely thank the Ministry of Water and Energy and Government of Cameroon for their leadership supporting this project and partnership with the private sector. Hydromine is dedicated to realising Grand Eweng according to high environmental, social, safety and integrity standards through inclusive dialogue and responsible cooperation with local and international stakeholders.”

The signature of the letter of intent related to the power purchase agreement marks an important step in the implementation of Grand Eweng, following recent requests by the Government of Cameroon to multilateral development banks for support in realising the project.

The letter of intent signals the start of the process to structure and agree the contractual terms among the Republic of Cameroon, ENEO, Hydromine, and co-investors to finance and begin construction of the project within three years, with electricity generation starting in seven years.

The private sector-led development and financing of Grand Eweng enables the efficient application of international standards for project management and sustainability while reducing direct risks and costs borne by the Government of Cameroon. Close coordination by Hydromine with the Government facilitates the participation and oversight of the State in key project aspects and alignment with national development strategy.

The development of hydroelectric infrastructure and increase in electrical supply is central to Cameroon’s goal to become an emerging country by 2035 and to foster growth in employment and living standards.

Grand Eweng builds on Cameroon’s successful 20-year track record of private power infrastructure investment. The Grand Eweng project will benefit Cameroonians by lowering the cost and increasing the reliability of electricity that can enable industrialization and economic growth. Grand Eweng could also eliminate polluting oil-based power generation and optimize the management of the country’s water resources.

Hydromine, an American sustainable energy company, is the original sponsor and developer of Grand Eweng since signing an exclusive letter of intent with the Republic of Cameroon in 2009, a memorandum of understanding in 2012, and a project development agreement in 2015 which was extended in 2018.

Hydromine financed and undertook detailed project technical studies and will shortly begin public consultations related to the project environmental and social studies for the sustainable and transparent implementation of the project.