You are at:Home»Headline News»Bridging the Building Integrated Photovoltaic (BIPV) Gap

Mitrex Integrated Solar Technology released its BIPV product portfolio in early 2020. The products were some five to six years in development, with Hadizadeh having identified a gap he thought could be bridged – that between the construction industry and the makers of BIPV products.

“Our main difference is knowing how to install these panels. The real advantage is the installation method – how fast we can install them and how close they are to other [construction]products,” says Hadizadeh. “They [construction companies]don’t care about how to run the wires, they want to look at the building and make sure it is done in two or three months or two or three days, depending on the project.”

With an eye to the exacting demands architects and builders have, Mitrex has developed a frontside coating technology and deployed a novel backsheet concept on its cladding product. Encapsulating crystalline silicon cells in a glass frontsheet, the product uses a honeycomb backsheet material – delivering light weight, strength and also an ideal material for affixation onto a building surface.

“By adding the honeycomb, we can control better the temperature on the solar cells and at the same time create a hanging system for a facade,” says Hadizadeh. Alongside its facade product, Mitrex also supplies more conventional modules for roofing, semi-transparent modules for windows and a BIPV railing solution for balconies and balustrades.

While it won’t reveal much detail, the Mitrex coating technology allows its facade modules to be produced with a range of colors and textures – so that they resemble stone textures like limestone or granite, along with a wood finish and a wide range of colors. Mitrex says that it is a multi-layer coating process, whereby the color and texture elements are introduced into the front glass, rather than on the surface, for durability.

“Our coating is actually within the layer of the glass,” says Hadizadeh. “Sometimes we are 2 microns within the glass, it all depends on the type of coating and the colors that we are creating.” While some efficiency is lost due the light reflected by the coating, the Mitrex CEO reports that by tuning the material to allow for light waves of a certain bandwidth to pass through, modules with some patterns achieve close to 99% of the power output of a conventional solar panel.

Mitrex is a part of a group of companies active in developing and manufacturing construction materials including Cladify and Stone Lamina – under the GCAT Group. Cladify has almost 20 years of track record in the construction industry.

Hadizadeh reports that Mitrex initially addressed the Canadian construction market after its launch, but has just opened offices in Los Angeles and New York. It targets 4 million square feet (1.2 million m²) of BIPV installations through to 2023.

The arrival of building material companies to BIPV is not entirely new. China’s CNBM Group entered the segment with its acquisition of CIGS pioneer Avancis in 2014. It maintains some German production capacity for its Skala module series, which comes in 11 colors, ranging from black and grays, through to blues, greens, gold and bronze.

CNBM operates three production sites across China for its CIGS BIPV modules – a combined nameplate capacity of 600 MW. However, it has recently pivoted to cadmium telluride (CdTe) and intends to establish CdTe manufacturing facilities for its new Colored Solar Glass product, with a capacity of 1 GW “across several sites” in China.

The Colored Solar Glass product from CNBM is a large format, at 1.92m², and comes in power classes from 110 W through to 180 W. Using 3.2 mm tempered glass, the module weight comes in at around 31 kg.

Regarding aesthetics, the CNBM CdTe glass features “controllable color and adjustable light transmittance” by virtue of a “triple lamination” of the front glass, using “high temperature color glaze and UV photosensitive ink” – according to CNBM. Patterns can also be applied to the front glass. The company reports that the new product has already been supplied to building projects in Shanghai, Sichuan and Hebei.

The traction that CNBM has had in the construction sector with its CIGS and, now, CdTe modules is difficult to ascertain. But its expectations for the segment are clear. CNBM says that over the next five years, some 10 billion square meters of building surface area is expected to be added, to an existing 60 billion. Of that, CNBM anticipates some 750 million m² to utilize BIPV – for a generation capacity of some 100 GW. It says 3 billion m² of BIPV could be added to existing buildings in the same, representing 400 GW of PV capacity.

“This product can be directly used as the roofs and walls of the buildings and has the advantages in terms of structure, function, appearance and power generation compared with other products,” says CNBM.

While the construction companies add another quiver to their bow with BIPV, some PV producers are choosing to optimize their products for integration. Russian heterojunction (HJT) producer Hevel Solar is attempting to foster BIPV deployment in its home country and among the nations of the Commonwealth of Independent States (CIS) and bring their product to intenational markets.

Vasiliy Shikin, the head of export sales for Hevel Solar, says that the long, snowy winters in parts of Russia and CIS countries can be advantageous for BIPV. “In Russia, in some regions with the snow loads, BIPV is actually more efficient than rooftop PV – because there is difficulty to have access to the roof and clear the snow,” says Shikin. “But on the vertical facade BIPV modules can be even more efficient that rooftop modules.”

“When there is snow, there can be the reflection from the snow [onto the vertical surfaces]and that can boost the output and it can also be interesting.” Shikin says that Hevel is expecting demand for its BIPV product from Russian and international companies active in the region that are looking to reduce their carbon emissions – although he notes that the regulatory framework in the region for BIPV is still under development. Shikin adds that Russia’s so-called “green taxonomy” may be overhauled to incorporate carbon footprint monitoring – to encourage companies to reduce their emissions.

Hevel partnered with a Russian construction company to develop its BIPV product. It involves a ventilated facade mounting structure that closely replicates the system already used by construction companies for glass or other facade materials. Frameless, dual-glass versions of Hevel’s HJT can then be affixed to the ventilated facade mounting system.

“We have expertise in manufacturing highly efficient HJT cells,” says Shikin. “We also have customized, non-standard modules – that is why entering the BIPV segment seemed like a logical step for us.” By virtue of the high efficiency, Shikin says that even with patterned or colored front glass, the Hevel modules can still deliver high power output.

Hevel’s coating process involves applying ceramic to the front glass, reports Daria Zhilina, a leading specialist at Hevel’s R&D center in St. Petersburg. “It is ceramic ink, which is fused into the glass at high temperature during the manufacturing of the glass, making it resistant to water, to scratches, UV and to other impacts.” 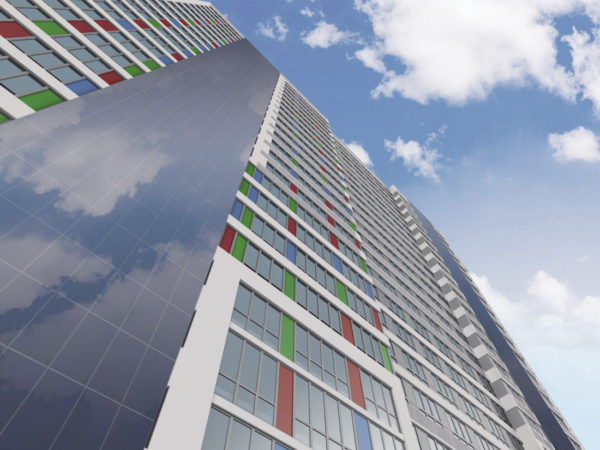 A Moscow high-rise building that will deploy the Hevel BIPV product.Image: Hevel

IHS Associate Director Cormac Gilligan says that BIPV applications have remained “relatively niche” due to the complexity of the installation process and the “increased capital cost of the BIPV system”. However, he is positive about the collaborations between the construction segment and BIPV suppliers.

“Partnerships between solar technology manufacturers and roofing companies and leading homebuilders will accelerate the rate of adoption of BIPV,” says Gilligan. He adds that public incentives such as tax credits or “additional payments for upfront costs” are likely required for the segment to expand – and to fund ongoing innovation. He points to SunPower spinoff Mexeon’s new, lightweight “Air” module as likely opening up new applications.

The Sunrun of BIPV

In terms of business model, there is also room for innovation, and here Mitrex is introducing a leasing model that it believes will entice more building owners to adopt BIPV. While it does allow for the purchase of its modules outright, it intends to partner with the construction companies and owners through a 30-year lease.

“Not everyone wants to be the utility company, and this will limit the market and increase the prices,” says Hadizadeh. “We want to switch to a model where the majority of the product we are providing is under a PPA. We will become the energy company. That is our ultimate goal and that has been our goal from day one.”

Legal frameworks for BIPV remain an impediment to more widespread BIPV adoption – and there is a decided lack of uniformity across markets. Across Europe alone, says German lawyer Sebastian Langer, there are a myriad of both construction and energy laws with which to contend. Lange is the chair of the BIPV body, the Allianz Bauwerkintegrierte Photovoltaik e.V.

“The thing is if we talk about PV, when it comes to a legal question, it is all about the energy law,” says Lange. “If I talk about building integration, I talk also about all of the regulations for the buildings. It makes it very complex and you hardly find any specialist that is prepared to deal with both aspects – the energy and building side.”