The Huguenot Toll Tunnel provides a route through the Du Toitskloof Mountains which separates Paarl and Worcester. The 3,9km long tunnel was opened in March 1988, and is 11km shorter than the route across the pass. According to the Average Annual Daily Traffic (AADT), more than 12,000 vehicles travel through the tunnel daily.

It was decided to replace and upgrade the tunnel’s old fluorescent lighting and control system for the first time since construction. The requirement was for a complete design, supply and installation solution, including a lighting management system.

More than 6,000 LED striplights and more than 200 LED adaptation luminaires were supplied and are managed by the Advanced Tunnel Solution (ATS) control system.

With the upgrade of adaptation luminaires, the adaptation light levels have improved drastically. This eliminates the black-hole effect when approaching the tunnel during bright daylight, much to the benefit of motorists, who are now able to see clearly when entering the tunnel. 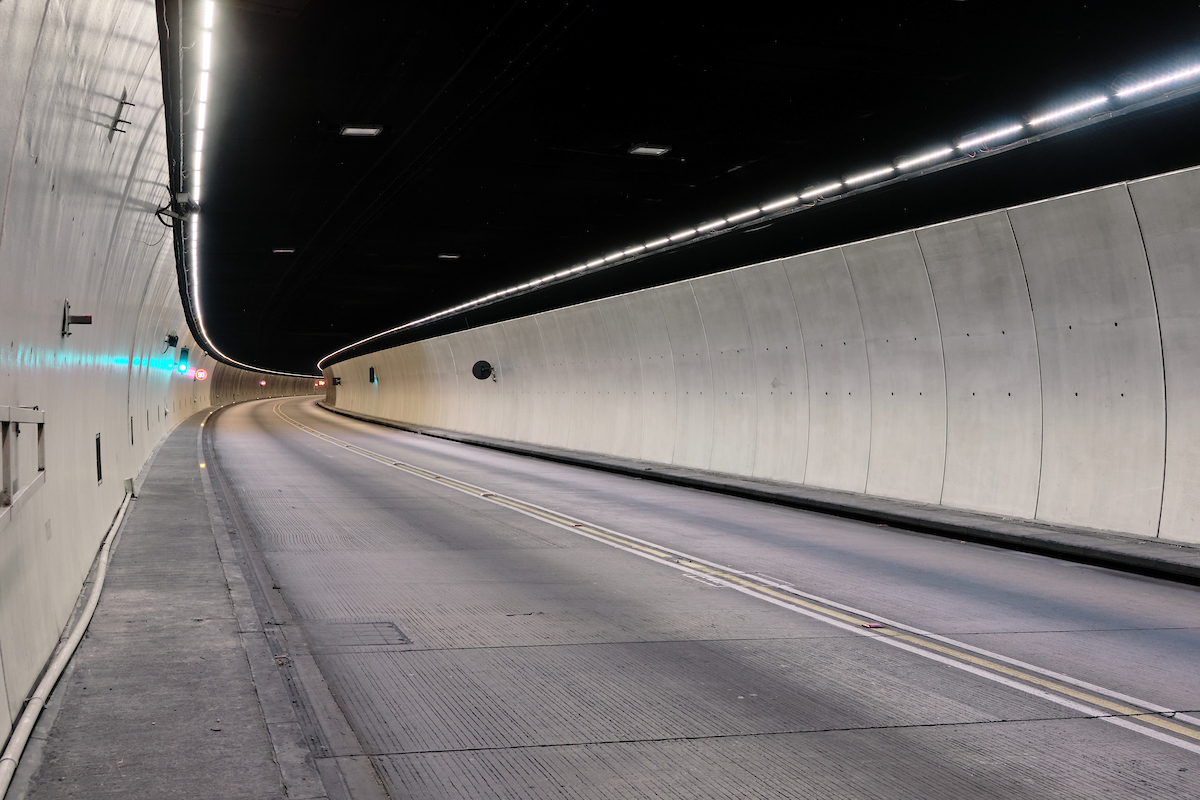 BEKA Schréder has developed a customised LED striplight, perfectly suited for this tunnel lighting application. This South African designed and manufactured luminaire incorporates the latest LED technology and consists of an aluminium extrusion body and die-cast aluminium endcaps creating the best thermal environment for LEDs. Various light distributions are offered to provide the right amount of light, exactly where it is needed. The request for a continuous line of light throughout the tunnel was achieved with this unique luminaire design.

The right light where, when, and how it is needed

The tunnel is divided into different lighting zones as per CIE88 and shown in Figure 1.

Each tunnel zone requires a different luminance level. The ambient lighting conditions and tunnel entrance as seen by an approaching motorist in the Access Zone is measured by a specialized luminance meter (typically referred to as an L20 camera). The L20 camera provides input to the control system which adjusts the light levels for each zone to follow the CIE curve (as per CIE88). The luminance level at the Threshold Zone is highest at the entrance of the tunnel and then decreases as you move into Transition Zones 1 and 2. Whilst driving through these zones, it gives the eye time to adapt to the lower light levels on the Interior Zone. As this is a bidirectional tunnel, both sides are treated as entrances with L20 measurements controlling the adaptation lighting.

Schréder’s advanced luminance calculation software analyses all aspects of a tunnel environment to provide the right luminance level in all tunnel zones. During the study, the number of luminaires to be installed in the tunnel and their orientation are calculated to create a curve as close as possible to the CIE normative curve for an efficient and economical light installation.

Tunnel luminaires are often subject to harsh environments. Vibrations, flying debris, car fumes, water leaks, and electrical surges can damage luminaires. BEKA Schréder’s manufacturing processes are rigorously controlled in their facilities to guarantee design excellence. Their products are tested and certified in accredited laboratories to resist these harsh conditions and ensure robustness and quality over time. 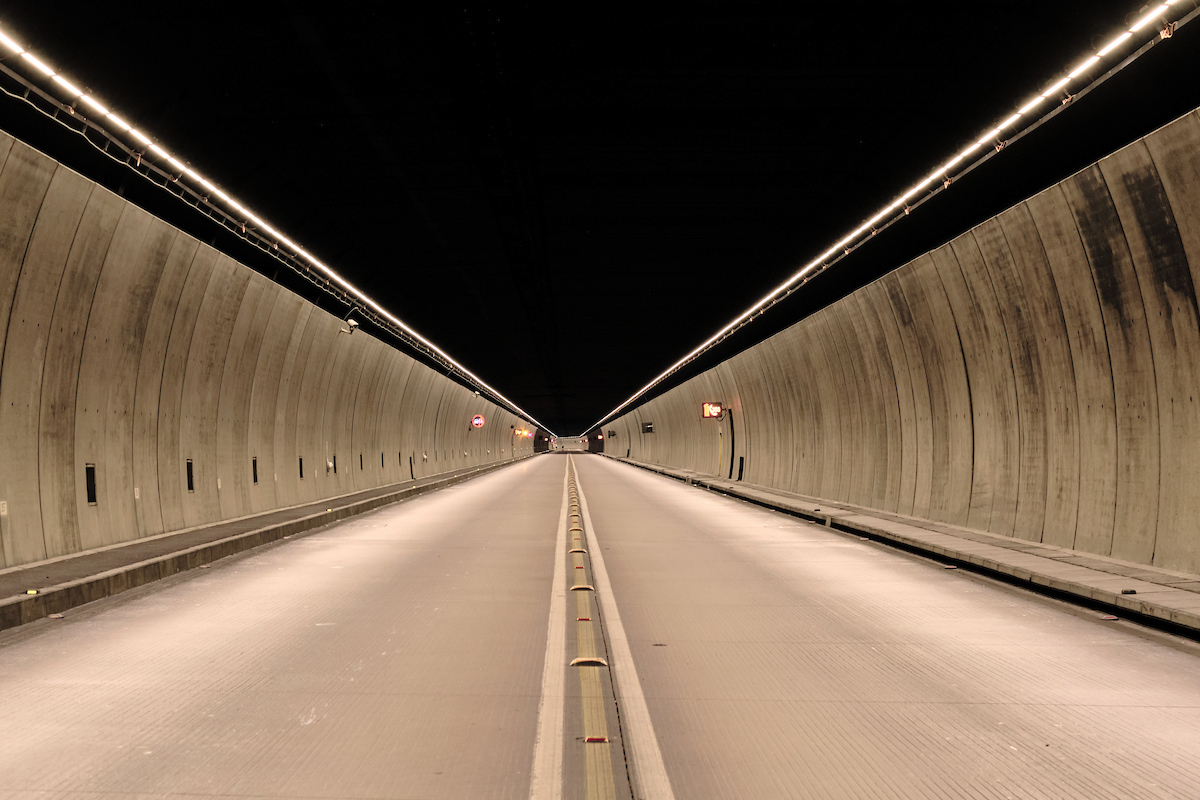 The ATS receives a signal from the L20 cameras installed outside the tunnel at the Safe Stopping Distance (SSD), then communicates with all local controllers installed in the tunnel luminaires. It collects information from the LED drivers, but also from hard input triggers installed inside the tunnel. ATS is also capable of switching between relay circuits to ensure long life of LED and driver components in the luminaire, while saving energy.

This intelligent system permanently monitors the power consumption and reports any BUS communication or power failures. It integrates the initial tunnel lighting study while the industrial BUS system enables individual auto-addressing, to speed up the commissioning process, saving valuable time and resources during installation.

In addition, a Tunnel Control System (TCS) unit facilitates and manages the communication between multiple ATS devices as well as the seamless upstream exchange of data and commands to a higher SCADA level system. Complete redundancy was achieved with ATS to ensure an always ready control system.

BEKA Schréder ramarks that they are delighted to have provided the lighting and control solution for such a prestigious tunnel. The high-efficiency and long lifespan of the luminaires will enable the South African National Roads Agency Limited (SANRAL) to reduce its operating costs while delivering a much better service for commuters. This new lighting installation has not only improved the driving experience for motorists but will also ensure less closures and hold-ups due to maintenance for a more pleasant commute.

BEKA Schréder, in partnership with Phoenix Contact, are very proud to be associated with SANRAL, Innovative Transport Solutions and LEAD Engineering Projects in providing a complete lighting solution for this prestigious project.

PreviousTrying to Cool the Earth by Dimming Sunlight Could be Worse Than Global Warming
Next South Africa: Earth & Wire Invests R1billion in Substation to Unlock 1500MW of Clean Energy Capacity into the National Grid