The tractors will “facilitate small-scale agriculture and increase the productivity of subsistence farmers”. The exhibition highlights innovations and advancements in sustainable technologies for rural areas through a series of case studies.

The new e-tractor aims to address the problems of ageing and decreasing population of farmers in the sub-Sahara African region.

“The e-tractor project is a great example of how we can link creativity and technology,” said Benita von Matlzahn, the director of cultural engagement at Volkswagen in a statement. “And it shows what it needs when we understand mobility is a social right…Responding to the radical changes in the countryside is one vital step on that way.”

Director of AMO Samir Bantal said that Volkswagen’s interest in this region and countryside mobility had given rise to a collaboration where architecture, which means stability, has come together with experts in mobility to solve the issues of rural farming.

Introducing the solar-powered tractors to market

The tractors will not be sold to the farmers individually but will be rented to the villages to be shared by the community.

The concept drawing at the exhibition shows a variety of vehicles around a solar tree-like structure. They will have removable batteries to be fitted into the chassis and will be charged at the solar station. 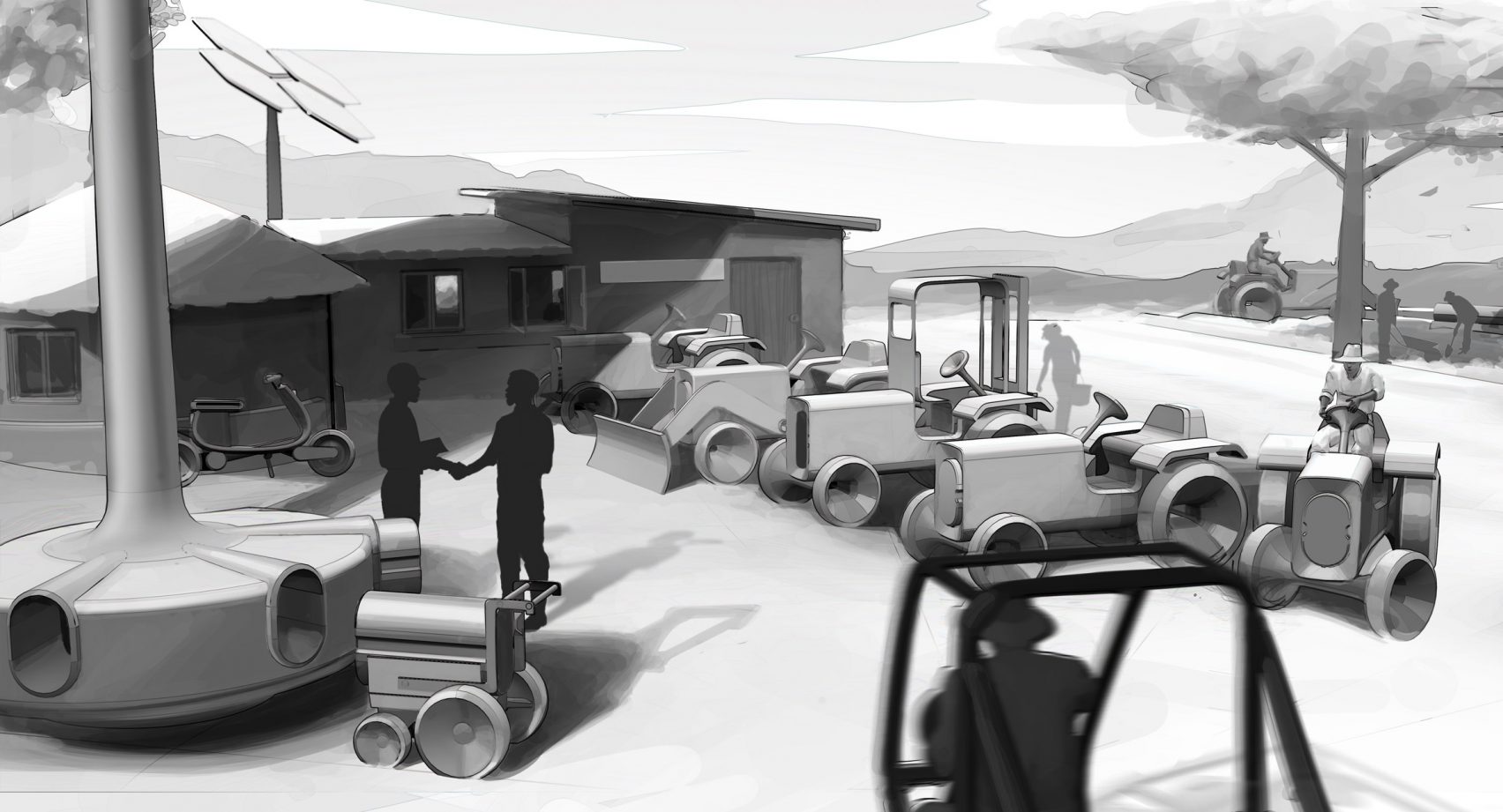 The tractors would be charged from a solar tree.

“Modularity is key in the design of the ecosystem, embracing sustainability and re-usability,” said Volkswagen.

“The battery can be swapped and used as an independent power source when its performance is in decline; modular parts allow for different configurations where the tractor could be assembled with different plows, or even as a drill to drill wells, or just as a people mover.”

The electric tractors will be developed in Sahara Africa through partnerships by AMO and Volkswagen with local universities and stakeholders so that the project can be implemented with the local needs in mind and to gain knowledge on technical aspects of the sharing system.

In sub-Saharan Africa, farmers have small holdings and getting access to mechanised farming tools is prohibitive cost-wise.

Some organisations are already offering shared mechanical tools like tractors to farmers. Smart farming is another fast catching concept here. New technology like IoT, financing apps and such are being used to make farming less labour-intensive and more productive. 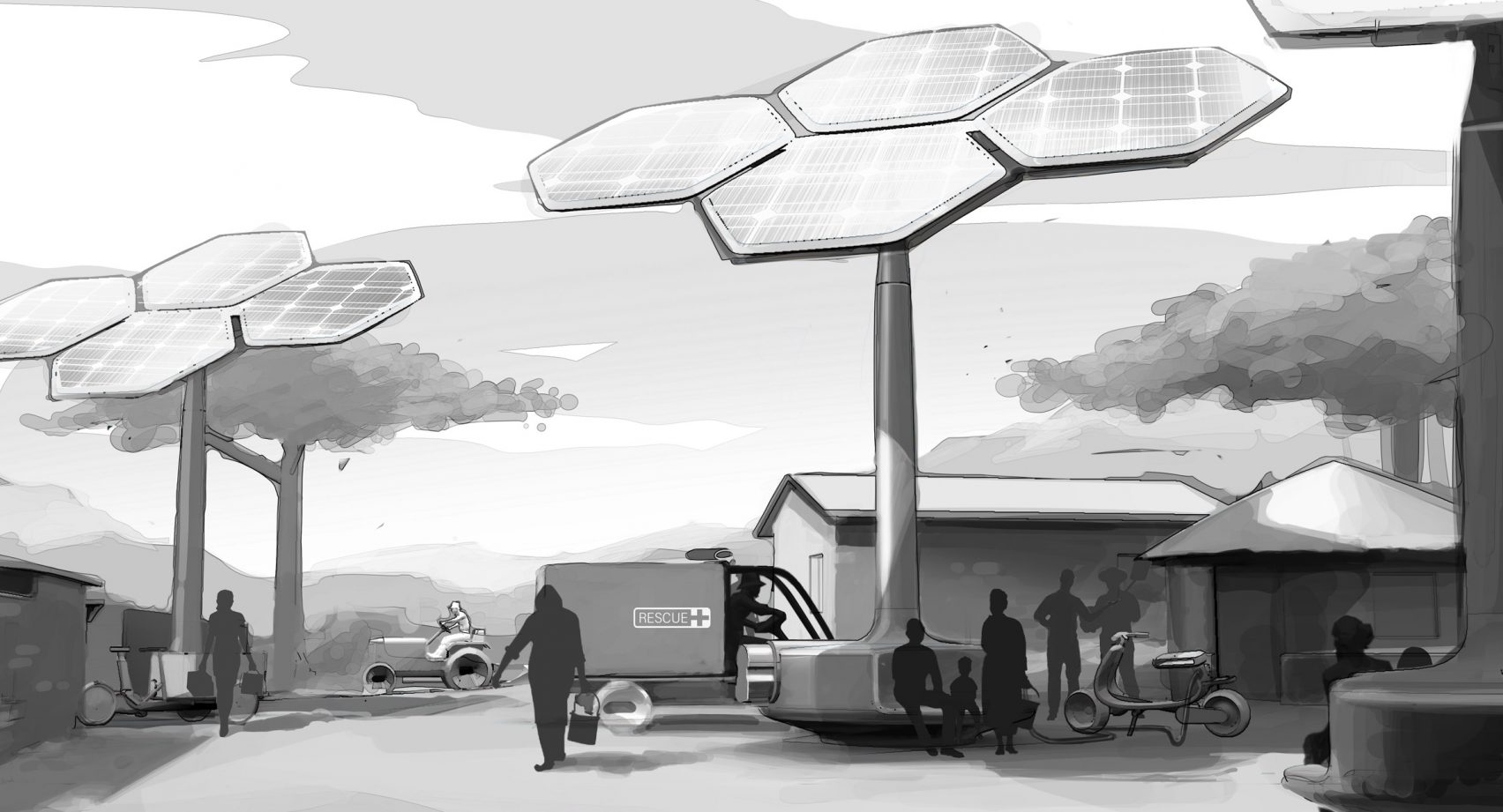 Visualisations of the concept show a variety of farming and mechanical vehicles, which all have a removable battery inserted into the front of the chassis. These would be charged by solar energy provided by tree-like structures supporting solar panels.

Accurate weather predictions, loans at lower rates, access to seed and fertilisers and shared use of mechanised tools have brought a new lease of life to this region. Productivity and pricing both have improved with better access to technology.

E-tractors are not a new concept, but the problems of battery charging and fuelling still remain with the prohibitive costs another factor. E-tractors at best can run for four to five hours a day on full power. The implementation aspect will have to be worked out before widespread adoption.

Take a virtual tour of the Solomon R. Guggenheim Museum in New York as part of the Countryside, The Future exhibition