Whilst South Africans may still be relatively in the dark over the release date of the updated Integrated Resource Plan (IRP) outlining the country’s future energy plans, experts on Tuesday agreed the future of energy in South Africa will be very different.

Energy experts Ted Blom and Dr Grové Steyn, who serves on the Presidential Task Team on Eskom, partook in a panel discussion at the African Utility Week and POWERGEN Africa conference and exhibition in Cape Town covering issues relating to the future of Eskom, the planned unbundling of the utility and energy in a future with climate change.

Blom did not mince words. “Eskom’s governance has collapsed. We don’t know who is running Eskom because it certainly does not look like it is the board. All it can be is a third force,” he said.

“We simply do not know who is held responsible because it is not maintained properly and not run properly. So, in terms of Eskom of the future – it’s already dead in the morgue. All we are throwing money at is for more people to be corrupt,” he added.

Blom also called Eskom’s debt burden a “fallacy”. “They want you (taxpayers) to pay this debt but 75% of that debt is not due and that is why I have called for a forensic investigation.”

He noted the Medupi Power plant as example. In 2008 the quote for building Medupi was R33 billion, he said.

“A year ago, I went back to Eskom to verify that amount and today Medupi is running at R170 billion for a half-finished project. If that is not corruption and mismanagement, then I don’t know what is and I don’t understand why we have to pay for that,” Blom stated.

But for Steyn the debt trap is very real. “Eskom is indeed in a debt trap. It is now being bailed out by government almost on a monthly basis and even the R23 billion allocated in the budget is not going to be enough to fill the gap and get Eskom out of the debt trap.

“So, it is quite serious, and it means we will have to start thinking outside the box and find a range of solutions to help ensure – given Eskom’s systemic role in the economy – we do not end up in a situation where we have a full on default on debt.”

Steyn also remarked on Eskom’s relevance in the future where the energy space is more competitive.

“[The] Eskom of large-scale coal-fired power stations is not the future anymore,” he said.

Steyn said as the technological economic paradigm changes, the cheapest power does not necessarily come from large coal-faced power plants but from smaller scale renewable projects.

“If Eskom is not going to be the only party generating power (in the future), what will Eskom look like? That is an important question we do not have an answer for,” he stated.

Steyn alluded to an Eskom with a changed business model. “Around the world traditional large-scale utilities have been successful in changing their business models and becoming players in the renewable energy space but that is a radical change that will require drastic changes in Eskom. The parts of Eskom that runs the grid and the distribution business, will of course continue to exist and will be very important for our future.”

Delays with the IRP

Blom in an earlier interview also took aim at the delays with the IRP which is supposed to give clearer direction on the country’s energy plans.

He labelled it a disaster. “There is too much political meddling and the plan has been rewritten and rewritten. I understand the labour sector is not happy and that is mainly because government is not transparent in how it is going about the IRP.”

Blom said the IRP should be a basic exercise and be redone annually with no big surprises. “It’s a disgusting disaster. Our future relies on it.  We need certainty and transparency and not attempts to hide behind the IRP to play to secret agendas of third forces. That is not acceptable,” he said. 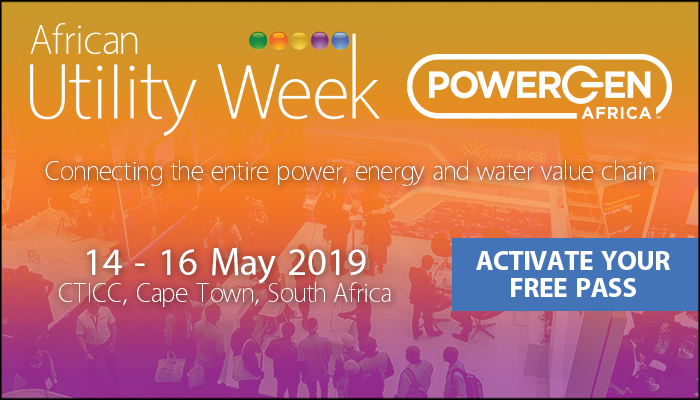 Pic: The African Utility Week and POWERGEN Africa takes place at the Cape Town International Convention Centre on 14-16 May 2019.