You are at:Home»Blog»Cycling Made Functional to Power Your Home

Cycling can turn functional to power your home.  The founder of the Free Electric hybrid bike, Manoj Bhargava, says that his invention uses mechanical energy in the most basic way in order to transform an hour of exercise into supplying rural household with energy for 24 hours.

The mechanism is simple: when you pedal, a flywheel is put in action, which turns the generator and thus charging a battery. What better motivation to work out from now on than to power your own home without any costs whatsoever? 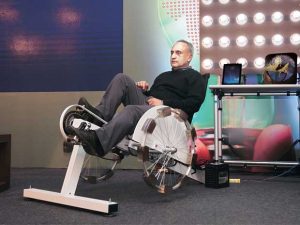 By pedalling for one hour, he says, a person can power a home’s lights and basic appliances for an entire day. Manoj Bhargava has built a stationary bike to power the millions of homes worldwide that have little or zero electricity.

Bhargava, who dropped out of Princeton University after a year because he was bored and then lived in ashrams in his native India for 12 years, doesn’t stop at bikes. He’s working on ways to make saltwater drinkable, enhance circulation in the body, and secure limitless amounts of clean geothermal energy—via a graphene cord.

PreviousSingapore Hospital Pushes the Envelope on High Performance Design
Next Eskom: Funding Gap of R50 billion Exists Even with the Requested Increases