Text description provided by the architects. Situated, high up on the eastern escarpment, on the Steenkampsberg mountain range, Dullstroom is one of the highest towns in South Africa, at 2100m above sea level. It has a sub-alpine climate, and is well known for its cool, often misty atmosphere, lending it an air of the Scottish Highlands. The landscape is classically dominated by rocky hillsides and slightly undulating terraces and plateaus, punctuated by clear streams, quiet lakes and thundering waterfalls. Walkersons farm is situated in a beautiful valley 10km’s East of Dullstroom.

The site has a gentle slope towards the Lunsklip river and various dams and lakes on its Eastern boundary and together with the majestic views into the grassed landscape valley beyond formed the basis of the conceptual departure point for the design of this house. These natural elements, the inspiration found in ‘the great outdoors’ and the escape from a busy urban life, were used and celebrated to shape this weekend home. The conceptual idea and inspiration was to merge the landscape with the architecture – the natural with the human. 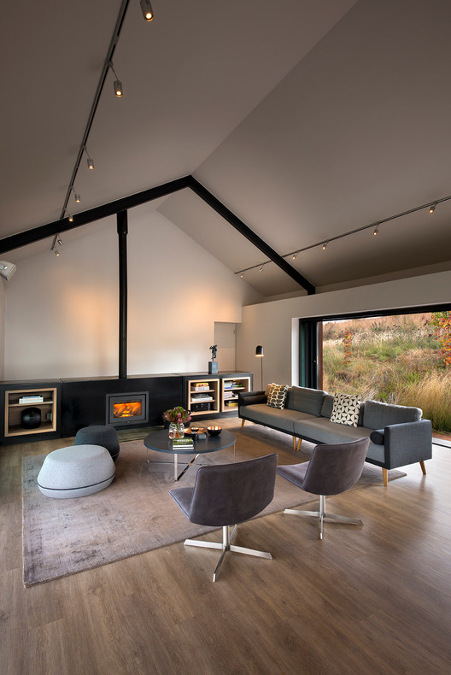 The owners associate strongly with Frank Lloyd Wrights idea of the Prairie Style which was born out of his belief that we needed fewer, larger rooms which flowed more easily, his antithesis to the rigid, confined and closed-in Victorian era architecture. The architectural form consists, essentially, out of the ‘liberated’ barn like living room structure and two native stonework boxes housing the bedrooms. The playful philosophy of lifting the carpet or rug of the natural veldgrass and placing the bedrooms underneath ensures that these ‘above ground, earth covered structures’ provide the cosy shelter associated with a mountain cottage while still allowing a contemporary perch with panoramic connections to the landscape from all areas of the home. 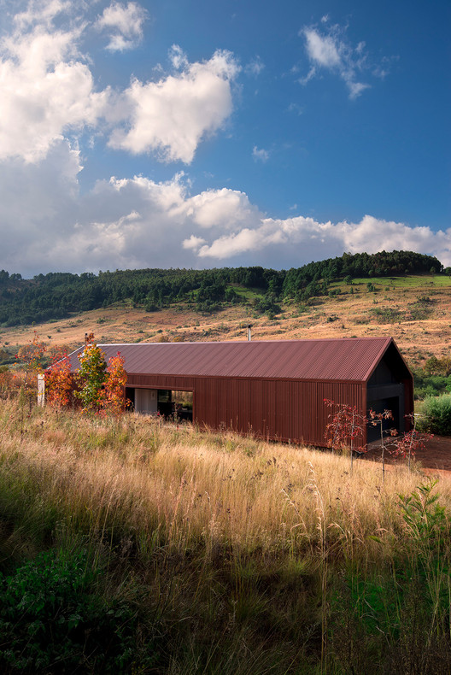 All functions are positioned along the natural contours of the site, keeping the built form as low profile as possible and in effect allowing the landscape to eventually cover and merge with the man-made forms. The absolute focus for these spaces, part building, part landscape, is to celebrate and be aware of the fantastic natural surroundings and views. As the indigenous vegetation and natural beauty recovers over the next few summer seasons this home will be allowed to seamlessly adapt and fuse with its natural habitat.

“No house should ever be on a hill or on anything. It should be of the hill. Belonging to it. Hill and house should live together each the happier for the other.”- Frank Lloyd Wright