You are at:Home»Green Your School»Cape Town School Kids: “We demand Climate Justice and a Just Recovery from Covid-19”

In South Africa, protests will happen alongside other civil society organisations, as well as the Climate Justice Coalition – a coalition of over twenty union, civil society, grassroots, and community-based organisations of which African Climate Alliance is also a part.

“We want system change now. We are calling on the government to take ambitious climate action, beyond talk. We can no longer have an economy powered by coal, which drives gross inequality when coal generators continually fail, waste water, pollute the air and emit CO2”, says Gabriel Klaasen, a key organizer of the protests and youth coordinator of the African Climate Alliance. “We are joining youth around the world in demanding urgent and decisive action from our government.”

“We are also joining the Climate Justice Coalition in calling for a radical green new deal, calling on the government to stop actions that are directly opposed to what is needed, that are continuing to pose a risk to our water, food, land security and economic stability,” says Ayakha Melithafa, a spokesperson of the African Climate Alliance. “The government has the opportunity to invest in a program that can transform our economy and build a more socially and ecologically just zero-carbon society, tackling unemployment and poverty simultaneously.” 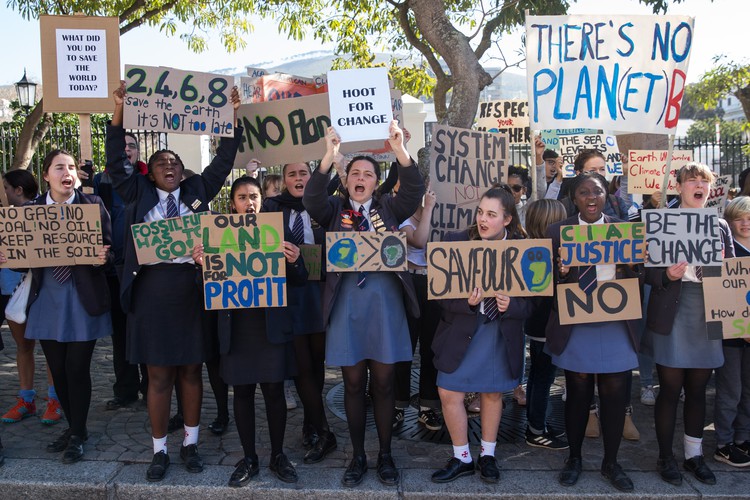 Melithafa, who attended the World Economic Forum in 2019, is one of 15 children who submitted a groundbreaking legal complaint that alleges that UN member states’ failure to tackle the climate crisis constitutes a violation of child rights. In February 2020, she was recognised by President Ramaphosa in his state of the nation address. He promised her that “no African child would be left behind in the transition to a low-carbon, climate-resilient, and sustainable society.” That this would be ensured “by the Presidential Commission on Climate Change”.

“But there is no point in having a Commission on Climate Change, if coal remains at the heart of our economy, if the change is too incremental to address the real urgency of the problem,” says Melithafa. “It’s time to address problems with real action. To finally address social and environmental concerns simultaneously whilst recovering from the devastation of Covid-19.”

In addition to in-person protests, the African Climate Alliance are also calling for youth and adults alike to join in digital support of the protests by using their social media to demand climate justice and a just recovery from Covid-19.

This year, protests have been limited by Covid-19, but the 25th will be the movement’s first major street protest of the year in many countries. In places where restrictions don’t allow outdoor actions, the youth will take part in digital actions. In places where demonstrations on the streets are possible, social distancing measures will be respected and numbers limited. The youth climate movement has adapted to the reality of lockdowns by moving protests online, to mainstream politics, and into the courtrooms

About the African Climate Alliance